By Gregg Morris –
BOOM BUST BOOM opened Theatrically March 11 in New York at Village East Cinema and was released on iTunes and On Demand March 15. It’s one of those movies that this reviewer believes will been seen – and should be seen – more than once.

Quick Synopsis: BOOM BUST BOOM looks at the 2008 worldwide economic catastrophe and says in a marvelous cinematic way that the consequences of future global collapses can be mitigated. That reasoning is based on what the filmmakers said is “our reliance on mainstream economics.” It spotlights …. mistakes of the past  “that politicians and central bankers would like us to forget.”

The film features interviews with high profile advocates for change, such as journalists Paul Mason and John Cassidy plus leading experts, including the Chief Economist of the Bank of England, Andy Haldane, and Nobel Prize winners Daniel Kahneman, Robert Shiller and Paul Krugman. Also, actor John Cusack (whose sneering ribald comment about economists and their predictions should not be missed in the movie – like so many others in the movie).

The documentary is a result of a meeting between writer, director, historian and Python Jones and economics professor and entrepreneur Theo Kocken. BOOM BUST BOOM is co-written by Jones and Kocken and co-directed by Terry Jones with son Bill Jones and Ben Timlett, AKA Bill & Ben Productions. 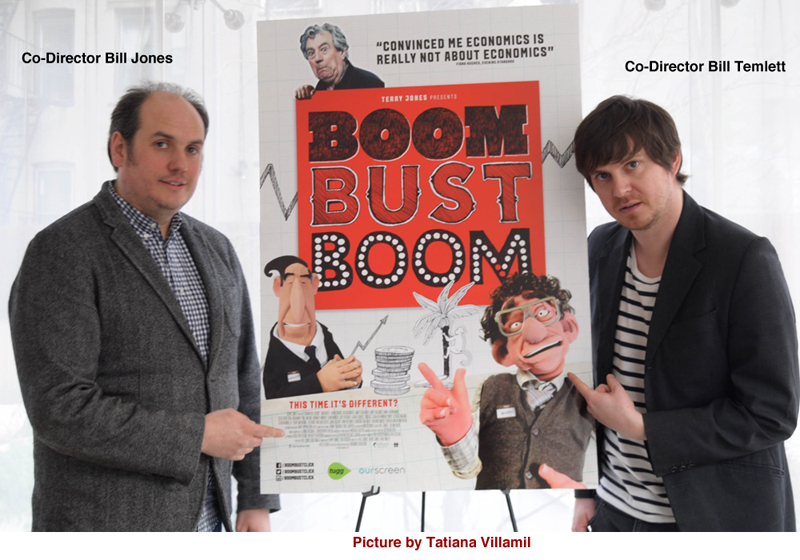 From Gregg Morris, WORD Editor: This Q&A took place March 10. I’ve edited comments to try to give as much as possible a  narrative touch to the Q&A. Such as, I edited my questions/comments when I was meandering or elaborating too much. I sometimes get wrapped up in interviews and drone on. I marginally and sparingly edited the remarks of Co-Directors Bill Jones and Ben Timlett, basically eliminating pauses for a better read for readers.

Also, because Monty Python’s Terry Jones appears in the film and narrates, I made references to BOOM BUST BOOM as another Monty Python movie which it isn’t, though it’s obviously Monty Python-esque, that’s for sure.

Gregg Morris, WORD Editor: I read somewhere, I’ve forgotten which publication, that said Boom Bust Boom was very funny. It’s Monty Python-esque, I thought after reading the review, so I assume if the filmmakers had done an end of the world documentary, I would probably laugh even though it would be grizzly. Does that make sense? Because, as I was watching that film, the cartoons, the puppetry, the animation, the talking heads, I was recalling in my mind people who were effected by 2008 economic meltdown, or destroyed, or pretty much destroyed, and so I couldn’t get them out of my mind even when I was laughing.

And plus there were news stories about different communities being sacked and everything. The films is mesmerizing, and, of course, it’s got that style of satire, sarcasm, parody that Monty Python fans want to see.

So, how did Jones and Kocken come together to do this story?

Bill Jones: The story about how they came together is quite long and arduous.

Ben Timlett: They were friends when they were starting off.

Bill Jones: Tayo [economist and entrepreneur Theo Kocken] owned a company … he did a sort of … basically, a corporate video, and then through a friend of a friend got in contact with, basically, my Dad [Terry Jones] and the two of them, the friend, then worked together on forming this corporate video and we directed it.

Ben Timlett: The way the film happened, so we became good friends, and then he, Tayo, he’s a professor, but he also runs a management company, advises massive pension funds, mostly in Holland, but all over Europe, on risk, and pretty much, I would say that he’s ignored by his clients, so they pay him money, and then don’t do what he says.

This anger and frustration [over his advice being ignored] has built up over many years in Tayo, and it built up to a huge level now of anger, and definitely in 2008 he saw that it had been building up. He had started off in the financial industry. He’s very good. He’s an exceptional mathematician. They gave him these models, and he would do these models with maths, and then he would say, “This is nonsense. I know this is nonsense.” He’s always been against the mainstream ideas.

Anyway, he basically got invited to be a professor at the Rotterdam University and he had to give an inaugural speech, so he wrote his speech, and his speech is against everything that’s taught in economics. He was totally against management, so it’s all about Hyman Minsky. It’s about the system being inherently unstable, boom-bust cycles, the history of boom and bust, and he sends it to Terry saying, “Do you think you and the boys would like to do an animation, maybe?” Terry read it, and got very angry and passionate, and said, “We need to make a film.” That’s basically how it started. 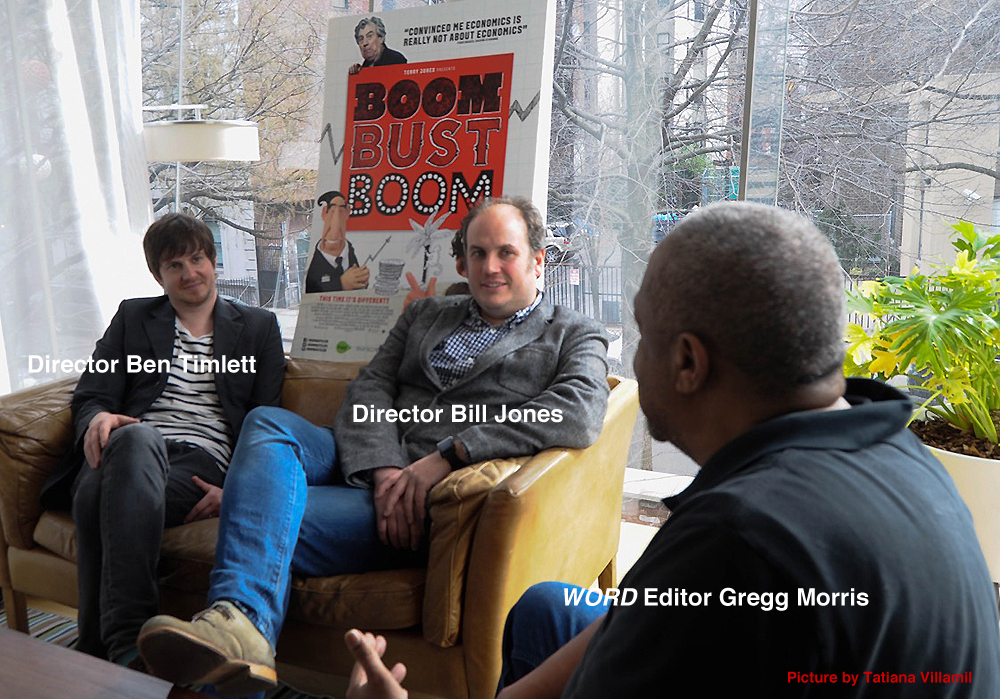 Gregg Morris, Editor: This is one of those films that really needs to be seen, starting with kids in high school, college, mom and dad. That’s what I think. So, I expected it to open into more than one theater in New York City. On the other hand, my knowledge of film distribution is probably old and dated.

Ben Timlett: … I think we’re getting some grounds from that [releasing on On Demand and iTunes besides the opening at Village East Cinema]. We’re getting a lot of requests for screenings, apologies, schools, and we’ve got, through Boom Bust Click, we can get our hat off to as many people as possible. Hopefully it’s going to build up and we’ll then have a Netflix …

Bill Jones: Our main goal is to get as many people to see it as possible.

Gregg Morris, Editor: It seems the timing, we’re going through all these politica debates and everything. People don’t seem to know what they’re talking about, or they’re blowing a lot of smoke. Do you think this [BOOM BUST BOOM] might get a boost from this. I’m hoping it does. That’s why I’m asking. Do you think this might get a ride with some of that that’s going on? Something that’s sane and makes perfectly good sense, but [people] have got to see it to believe it.

Bill Jones: Yeah, I think it’s one of those things which is, politicians can say something that sounds, on the face of it, like sense, like common sense, but then actually doesn’t work. Then we’re trying to say, “Look, there are problems with our common sense, of human nature, doesn’t work.” A lot of the time it makes the wrong decisions, whereas … That’s why we want to get it out to as many people as possible, because you’ve got to understand the failings of the system before you …

Ben Timlett: Or the failings of ourselves, then create a system that can protect us from ourselves, in the same way that we drive on one side of the road now. We worked out that we crashed before, so we put in a system to stop us crashing. I think in the capitalist system there will always be boom and bust, but it’s about limiting the effects. It’s about not having everything interconnecting. The banks are all interconnected. They lends billions to each other all the time. One goes down, it’s a domino crash. They took everybody. There’s all these pension funds, with everybody’s pension money last time. What’s next? Money out the bank.

Bill Jones: After the 1920’s crash … they [legislators] put in these things to separate out the banks, to limit the repercussions of a crash, and in 2008, they just didn’t, so hopefully after the next crash, because there always will be a next crash … after the next crash, hopefully we can seed some thought about what will help us reinstate those protections and …

Ben Timlett: Find a way of getting people, everybody, to engage in it, and think about it, and talk about it.

Gregg Morris, Editor: I can understand that.

Bill Jones: I was like, “Oh no, but it’s got puppets, animations, and songs.” And she was like, “What?! Really? Okay.” That’s what we’ve got to do. We’ve not a comedy. We don’t know about it either. We’ve just made a film that we would say that we could watch.

Gregg Morris, Editor: The film looks like it was made with someone who had a PHD in …

Ben Timlett: We were doing it on the job [learning about economics while working on the film]. We were …

Bill Jones: We were learning.

Ben Timlett: …we’re filmmakers, so we were learning about all these issues as we were going.

Bill Jones: Of course, we were interviewing Nobel Prize winners.

Gregg Morris, Editor: I’ve got to ask you about that, so what was your pitch? “We want you to be in this movie where we’re going to have cartoons and talking puppets.” How did they …

← Remarks by President Obama About His Choice for the U.S. Supreme Court
Statement by the President on the Sixth Anniversary of the Affordable Care Act →