The following passage is edited for context, accuracy and clarification for comments by Jojo Annobil, Executive Director, Immigrant Justice Corps, at the CUNY J-School forum, November 21.

One-point-nine million of the undocumented population have lived in this country for 20 years or more, 6.6 (million) have lived in this country for at least 10 years or more. They are enmeshed in the system. Former Mayor Bloomberg once said that his people came here illegally. When they got here, employers hired them even though they were not supposed to. But if they hadn’t, the economy in New York City wouldn’t (had) move. It wouldn’t be what it is. If you take those people out of the system, the economy will break down.
The ultimate goal, the ultimate goal is to fix the broken immigration laws. That is the ultimate goal. That is the root cause of where we are now, and we have to keep our eyes on that prize.

President-elect Donald Trump’s ranting early in his campaign about his plans to deport 11 million undocumented immigrants, to withhold federal funds from sanctuary cities, and the threats, along with numerous racist and rancid comments about Mexicans and Muslims, reverberated throughout the nation. NYC Immigrants Fear Trump Will Send America’s Deportation Machine Into Overdrive, was the November 15 headline of one gothamist.com story.

“We don’t know what’s going to happen,” a staff member of Make The Road New York immigrant advocacy group was quoted as saying. “But for now, we have to take Trump at his word.”

His word, literally, or his word, figuratively? Trump’s hyperbole ranges widely and the mainstream corporate news media heavy weights, who like to portray themselves as America’s watchdogs, have done a poor job holding him accountable for his choice of words. So, what can New York City’s immigrant communities do to prepare for the policies of, and to make sense of, the statements by the President-elect of the United States who has been described as a racist, sexist, demagogue, nativist and birther?

At a November 21 forum organized by CUNY’s Center for Community and Ethnic Media, panelists provided information about the legal protections and rights of immigrants and details so that New York City’s immigrant communities can cope with new pressures or challenges that may arise under the incoming Trump administration. Topics included sanctuary cities, keeping data about immigrants safe, how immigrants can protect themselves in case of a raid, visa options that may not have been explored, and responding to a possible reversal of President Obama’s 2012 executive order, Deferred Action for Childhood Arrivals and resources for legal aid. 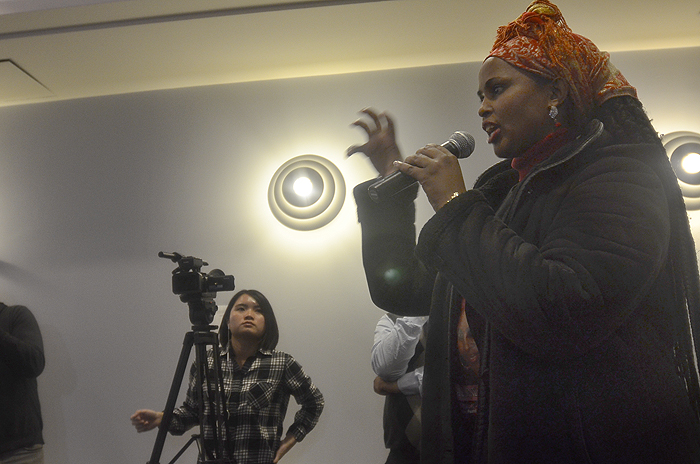 A journalist asking a question of the panel.

Two in particular, Alizabeth Newman  and Jojo Annobil, directly addressing the contagion of fear caused by Trump’s comments, said that immigrant communities should not let irrational fear effect their lives. Trump’s vitriolic comments distracted attention from realities. For example, New York City regales in its status as a Sanctuary City and organizations and institutions and government services are in place to assist undocumented residents. Sanctuary cities have policie protecting undocumented immigrants, such as not prosecuting them solely for violating federal immigration laws.

So, said, Alizabeth Newman at the forum attended by scores of reporters from ethnic news media, don’t panic irrationally. “People can’t stop living and should not stop living,” she said.

Said Annobil of the Immigrant Justice Corps, “When we say let’s calm down, we are talking from experience and knowing the systems in place.” But he said he recognized, as did Newman, that “unfortunately,” the immigrant on the ground doesn’t know that.

Nevertheless, he said, “That is why we are here to disseminate that information. We have fellows, recent college graduates, recent law school graduates who are so passionate about immigration law. We’ve placed them in organizations that are underserved. We have them in African communities. We are in the Arab community,the Arab American Association of New York City. We are working with MinKwon which tends to Koreans. We have to go in the field, whetting, to calm these fears.” 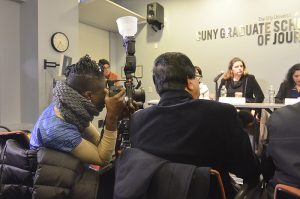 Said Newman, “Candidate Trump made a lot of statements and (he) definitely wanted to send a message and that caused a lot of fear about how that might be implemented as policy and what that might really mean for immigrant communities.”

“But as a practical matter, what can really be done,” she said rhetorically, meaning that the President-elect made statements that were unrealistic. “I think we’ve already started to see some change after the election in the practicalities of, well, how (something) is going to implement? Everything from building the wall around the entire border came to well, maybe” he might build “a fence here and there.” The realities of the cost and time for building the wall that he regularly boasted about are impractical, she said.

“I think we need to wait and see, and I think we need to take advantage of the wonderful opportunities that the city is making available for people who are concerned to come and get some very specific legal counsel that is particular to their family and what options they might be able to take,” she said.

For example, Newman said, “The more time somebody has in this country, where they’re working, that they are on the books, that they’re doing the right thing, that usually means something. If they’re at a point later, where they have to be in front of a judge, sometimes that in and of itself, just staying as a contributing person in their communities makes a difference.” 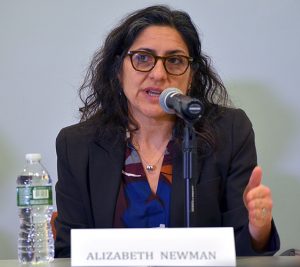 Said Annobil: “You are in a city that has always been welcoming. A welcoming city, a city of immigrants. The city has put out – I hate to keep repeating this – the city has put out a lot of resources in order to protect immigrants. In today’s city, if you are detained, if the federal government detains you for removal, the city will provide you with a lawyer, a critical, competent lawyer to represent you. That wasn’t the case four years ago.”

“When you look at everything that’s happening, there have been changes from the campaign scene to today,” he said, citing the The North American Free Trade Agreement,  popularly known as NAFTA. “I want to get rid of NAFTA,” he recalled Trump saying but now the President-elect has been saying that there are certain portions of NAFTA that “we can re-negotiate.”

“The same thing with removal,” said Annobil. Is he “really going to remove two to three million people who have criminal convictions. Congress has appropriated money to remove at least 400,000 immigrants a year. Is there the money to do that?” How is he going to do that? The system, Annobil said, is already overwhelmed. “They are dealing with children coming out of Central America. They are dealing with adults and children coming out of Central America. They can’t even handle that kind of load or case load.”

Annobil spoke as if he was addressing the residents of New York City’s immigrant communities though the reality was clear that he was talking to their ethnic news messengers in the CUNY J-School room. 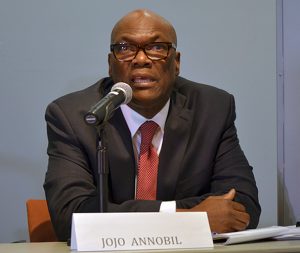 Gregg Morris can be reached at gmorris@hunter.cuny.edu.