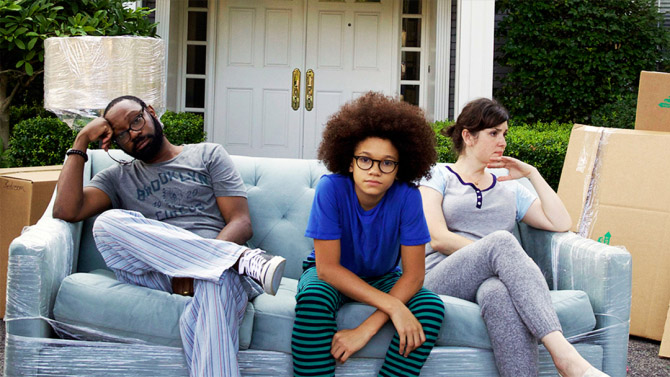 It was not what I expected but I wasn’t disappointed at this GIFF opening night film.

Director Rob Meyer and Writer Annie J. Howell, with sound acting by a cast of veteran actors, including some stars, as well as promising young thesps, tell a story about, “An interracial family struggles to adjust when they move from New York City (Brooklyn) to a small, predominately white town in Washington State.”

That one sentence IMDb summary caught my attention. An interracial film screening, I thought, shouldn’t be ignored by this reviewer in these days of America’s Grand Guignol of a damning social problem being stirred up by Donald Trump’s vicious rants about Mexicans and Mexican Americans, Muslims and Muslim Americans. His unleashed vitriol pours out in the wakes of still palpable memories about Ferguson, Missouri, where the police slaying of Michael Brown led to federal investigations showing that blacks were openly treated as second-class citizens for years, and revelations about similar situations in other towns in America, and, of course, New York City where the NYPD-involved deaths of Eric Garner, Kimani Gray and others reveal the scourge of the beast still at large. The ugly realities of America’s race problem play out before us every day.

This is not a movie about race or race relations or interracial relations or racism in America nor in the small, fictional Washington town where this story takes place. Rather, it is an amiable story by savvy filmmakers who happen to dabble lightly in issues with race, class, privilege and teenage angst as tepid subjects not big pressing social issues. The director, writer and the cast served up an amiable flick with pointillistic dabs of humor and wit regarding small town and domestic family banalities, including teen and youthful angst. Included are melodramatic moments here and there that won’t make anyone in the audience cringe.

Plot: Mack, African American, played by Nelson Ellis, and Gina, white but her ethnicity unknown, played by Melanie Lynskey, moved with their son Clark, played by Armani Jackson, from their Brooklyn abode to a fictional west coast town in Washington. Gina, a talented photographer, has accepted a tenure-track offer from a college in that west coast town because of her photography. The family is doing well, though Gina, it seems, is the family’s primary care provider. Mack, at work with his second book which is a challenge, also pens articles about food, and Clark is 13 and a bit of a nerd.

The family’s immediate big city friends, neighbors and associates who send them off early in the film are a posse of pleasing ethnically diverse, urban denizens. The family, having successfully dealt with the urban realities of living in a moderately upscale Brooklyn neighborhood, don’t anticipate any unusual problems in their new community far, far away? Hmmmm.

They arrive in the fictionl town of Rome but the big moving van with all of their furniture and belongings is still in transit. Nevertheless, they adjust and as the story unfolds the audience sees each family member deal with encounters, tepidly racial and otherwise, in their new community. On his first stroll through the white neighborhood where he now lives, Mack crosses path with a goofy David Charles Ebert playing Tom, a neighbor, white, and also head of the block association. He quickly lets the new neighbor know that there is already a buzz in the community about him and his family (since it is the only interracial family on the block if not in the college town).

Tom will later invite Mack for a drink at a local bar and wise-cracks to its patrons inside that he can vouch that Mack isn’t like those other unsavory black people, trouble makers, whom they read about or learn about on the evening news, who cause trouble. Mack takes the insult in stride; the audience sees a bemused look on his face (because he has probably had to deal with more provocative racial moments in his life).

The personal discoveries continue, and the few good scenes for this type of laconic film that made impressions because of the director and the writer and the cinematography seemed only faintly connected to the main plot line. For example, the audience witnesses Gina learning the realpolitik of her new department and her new eccentric colleagues in a karaoke, binge drinking episode where she embarrasses herself at a local eating/drinking hole. Janeane Garofalo plays a small but savvy role as an eccentric colleague – actually all the colleagues the audience sees are eccentric – but Garofalo’s character seems to be the promising mentor. Those moments when the audience sees Gina interacting with her colleagues are amusing and plausible but look as if they were created to distract from a so-so plot that sort of meanders.

One energetic scene, however, shows the young Clark having close encounters with new friends who seem to have adopted him because as one, Oona Laurence, playing Ambrosia, had said to the second friend, Miranda McKeon playing Julie, “We totally needed a black kid. This town, it’s so white!” The pubescent duo of Ambrosia and McKeon in that one energetic scene gyrate and grind and shake their booties to rap music to impress Clark that they know the depths of hip-hop, rap culture. They don’t, of course, but they know enough to please themselves . Later Ambrosia engages in a determined but childish flirt with Clark in her bedroom and that eventualy leads to more drama, some of it contrived but not that much. This is a PG movie.

LITTLE BOXES was smartly done and it has humoress moments that I hadn’t expected but, several has lengthy scenes that seemed incongruent in a story supposedly about an interracial family dealing with challenges in a predominately white community because of their ethnicity and color.

Netflix, the audience was told at the Q&A following the movie, purchased the rights, making this movie a commercial success.

Some cast members as well as the director and writer at a Q&A after the screening.

Gregg Morris can be reached gmorris@hunter.cuny.edu.