America has spoken. On January 20, 2017, Donald Trump will become the forty-fifth President of the United States and the avowed mission he wants us all to believe is to “Make America Great Again.”

I can’t say that I am not disappointed. I remember waking up November 9 and checking the news application on my phone for the results, and once I saw that he had won, I was pretty much sad for the rest of the day. The weather in New York that day mirrored my feelings and what I imagined were the feelings of many New York residents. That is, damp, dreary, gloomy and cold.

The normal chatter and hub bud I have been accustomed to hearing on my train commute was extremely quiet, with little to no conversations. Everyone seemed to be in a zombie-like trance. Maybe the news slowly sinking in was manifesting itself.

“I was shocked,” says Melanie Solano, 20. “I fell asleep early because the election was stressing me out. I found out he was president around 2 a.m., I thought it was joke but it was real. I was very sad and worried.” Melanie is a Hunter student majoring in media studies. This interview was conducted via email.

“I was speechless and heartbroken,” says another Hunter student, Michael Cady. “It took a few days to fully comprehend it.” He also says, “I stayed up until 3 a.m. Tuesday night to watch the end of the election result coverage on MSNBC. It was not until around 9 p.m. when half of the voting results had come in that Rachel Maddow said, ‘Since it looks like Trump will be the winner of the election’ that I ever even considered the possibility of a Trump win. Over the past year, even when Trump became the Republican nominee, it never once crossed my mind that he had a chance.” This interview was conducted via email November 15, 2016.

If you have been following the elections, then you understand why so many are disappointed and feeling angry. The whole election coverage was a joke to me and the media played a huge part in this. By joke, I mean, instead of focusing on the important issues and educating the people on the policies of Trump’s campaign, they focused more on the obnoxious comments that he would make on Twitter and in his extemporaneous comments.

I asked a few people if they were aware of Trump’s policies and I received a mixture of answers.

Iwinet Stewart, 27, who lives in Alberta, Canada, says, “I am aware of the Keystone Pipeline Deal.” Stewart voted Absentee as a Democrat. She is the Director of Marketing and Communication at the Student’s Association of MacEwan University.

Kimberly Thomas, 18, says, “I am aware of the policies he plans to implement but I don’t know the details of them. I know he plans on building a wall along the Mexican border, deporting immigrants although I’m not sure if he specified whether it would be all immigrants or those with criminal records. I am also aware that he intends on repealing the Affordable Care Act.” Thomas, a Jamaica, Queens, resident, attends Brooklyn College, and her goal is to become a physical therapist.

Alexa Ellis says, “Only that he wants to build a wall to keep immigrants out. But I think that’s the fault of the media, because they only show the obnoxious things he would say.” Alexa is a 19 year old Hunter student. She is a media studies major with a concentration in journalism.

On November 9, a few protests broke out in the United States. I became aware of the those in New York, Seattle, and Chicago via social media and CBS news. I was very surprised and felt good. The protests were peaceful and although I don’t think they will change the outcome of the election, I believe they could open up discussion and more people will become aware who could probably start making an effort to be as involved and informed as much as possible. 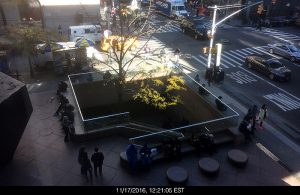 Kristen Walker, a former student who intends to major in communications when she returns to college, feels the same way. She says, “Yes I am aware of the protests that have been going on. I don’t think they will change the outcome of the election, but maybe it can lead to more conversation and education about America’s government and its policies.” Walker is 28, and she is the Unit Secretary at the Albert Einstein Hospital at the Montefiore Medical Center.

Michael Cady, who not only heard about the protests but participated in them, says, “I do not believe a protest is going to impeach Trump, no, but protesting is important because it is about making a statement that the people will not stand for such aa disastrously unqualified candidate to fill office. Trump is not only unqualified to be president and inexperienced in politics but a danger to the country, which should be particularly obvious now that he has chosen his first two members of staff, both whom are equally unprepared for a job in the white house and ties to white nationalism.” Cady is a media studies major at Hunter.

The country has a long road ahead and I believe that going forward, many people will make it their duty to be more informed. If the mainstream news media aren’t providing enough information, then it is our duty to start researching. We have a lot of information at our finger tips via the Internet, and it’s time that we use it.

Although we can make our own predictions and assumptions as to what might happen next, we will never truly know until Trump officially gets into the White House January 20. Michael Cady, 25, says, “There are so many potential issues. The thing is, Trump’s supporters are riled up now, and damage has already begun. In just the past week, hate crimes towards people of color and the LGBT community has risen dramatically. U.S. Department of Justice 2015 Hate Crimes Stats.

Even if President Trump implements policies that are not as damaging as the ones he promised, those dangerous white supremacist followers of his have been given the okay to come out from their caves and wreak havoc on anyone who does not fit into their definition of what true Americanism is according to them: Straight and white.

Alexa Ellis expressed similar sentiments. She says, “I feel like because he is President, we will have out first war on American soil.” Ellis is a Jamaica, Queens, resident and her goal is to be a successful video editor. She eventually wants to have her own production company.

Kashima Grant can be reached at Kashima.Grant26@myhunter.cuny.edu

← Essay: Helping New York City Immigrant Communities to Resist the Smog of Fear Caused by President-elect Donald Trump
“The Girl That Meets All the Celebrities” →