Room 305B can transport you to the depths of the Atlantic where blue whales dip in and out of the ocean; to Florida’s coast where hammerhead sharks hug the shore; and all the way to Namibia where elephants and giraffes roam freely. Room 305B in Thomas Hunter Hall is the home of The Hunter Sustainability Project,  formerly known as the Hunter Solar Project,established in 2008 as a student-led initiative to install a solar power energy system on campus. After its renaming in 2012, the organization refocused and broadened its initiatives to include other environmental issues important to Hunter’s community like sustainability. 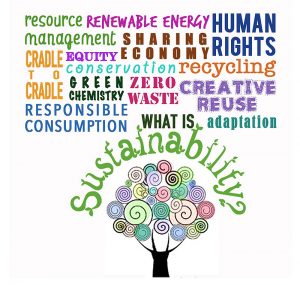 Truly Johnson, 20, treasurer, joined the club in her freshman year. After taking AP Environmental Science at the School of the Future, she became “scared of the state of the world” and enrolled in Hunter knowing she wanted to join a campus organization dedicated to sustainability, she said.

Every semester, the club hosts a clothing swap and T-shirt printing event to prevent wastefulness. Students can either trade a shirt for a different style or bring in a garment and revamp it with an eco-themed logo or design.

Elizabeth Roginkin, 21, participated in the clothing swapathon her club hosted. After combing through her closet, she picked out a few garments she hardly ever wore and traded them in for new pieces. It became a way for her and other students to reexamine what they do and don’t need in their daily lives, she said.

Making sustainability more tangible to Hunter’s students is one of the club’s main goals. “We try to involve the Hunter community as much as possible,” said Roginikin, who majors in environmental studies and is pursuing a certificate in public policy through the Roosevelt House policy program. In addition to composting and recycling, the club hosts an event every month to engage fellow students. In time for Thanksgiving and for the third year in a row, the club hosted its Sustainable Thanksgiving, partnering again with the Undergraduate Student Government to convert food waste from its annual Thanksgiving dinner into composting. 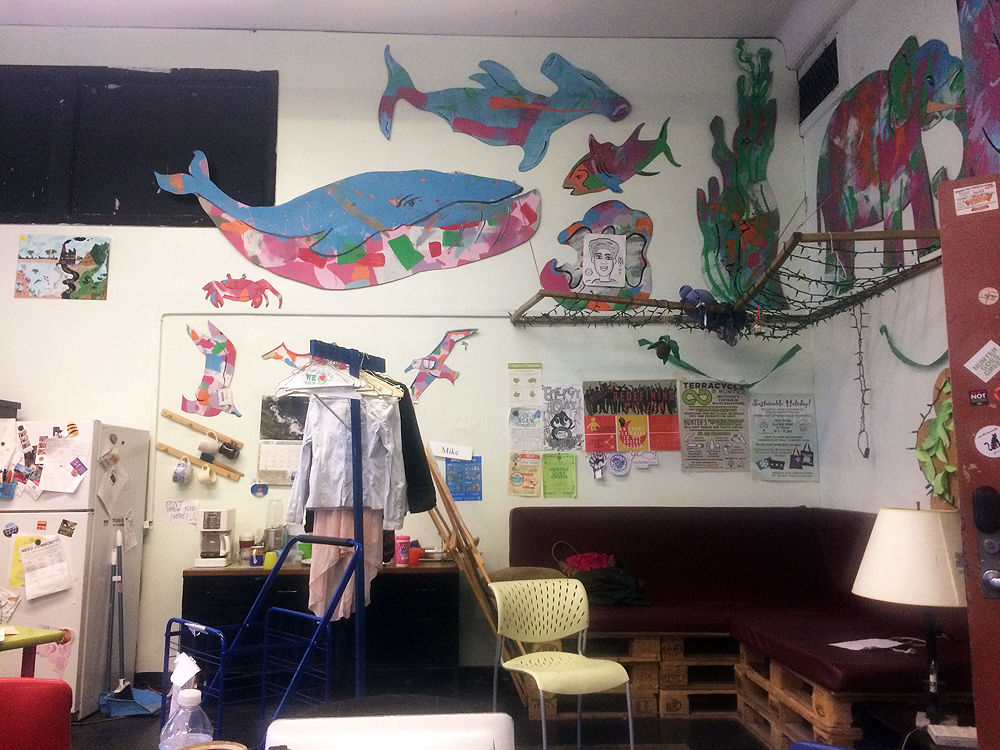 Inside Room 305B. Picture by Olivia Pawlowski

Food waste from the celebration was driven to the Earth Matter composting center on Governor’s Island, which “seeks to reduce the organic waste misdirected into the garbage stream by encouraging neighbor participation and leadership in composting.” according to information gathered from its official website.

In high school, Mike Tejada, 21, club president, realized he “wanted to be more carbon neutral” and minimize his carbon footprint. By his senior year of high school, he had adopted a vegetarian diet and now, as a senior in college, he has converted to veganism. Sustainability, for him, is very much about what one eats, he said. Tejada, a Bronx native, buys food locally and has completely eliminated animal by-products from his diet. Eliminating animal agriculture is not only important to the Sustainability Project and Tejada himself, but also for another club where he is a member, Paths to Animal Liberation.

Paths to Animal Liberation, according to the description on its official Facebook page, strives to “educate people about the horrific implications of using and abusing animals for food, clothing, breeding, entertainment and research.” It often partners with the Sustainability Project for campus events. Every year, during Earth Week in April, the Sustainability Project hosts a week-long event called Hunter Goes Green in which the main floor of Hunter’s West building becomes an educational playground full of games, informative presentations, and giveaways centering around sustainability and environmentalism.

Paths to Animal Liberation often takes part in the event and holds a tabling, informing students about the benefits of veganism. Natalia Scollo, 23, who is graduating this semester with a major in political science and double minor in economics and human rights, believes a change needs to happen about how “vegan is received and how animal activism is perceived,” she said. “Animal rights aren’t discussed in presidential elections ‒ I want to see that changed,” said Scollo.

Where Did The 2016 Presidential Candidates Stand on Animal Rights & Welfare?

At the time this story was being developed, the Hunter Sustainability Project was making preparations for its last event of the semester, Sustainable Holiday on December 7. “It’s really fun to bring arts and crafts into the sustainable side of things,” said Brithney Malchan, 21, who is majoring in biochemistry and minoring in environmental studies. For its Sustainable Holiday event, members recycle old papers, magazines, and bottle caps to make bows, wrapping paper, and holiday magnets.

Throughout the years, the event has shown Malchan and Johnson their own knacks for arts and crafts. One year, Johnson made her mother a candle holder out of leaves and an old jam jar. With Christmas fast approaching, she has started to brainstorm what else she can recycle to make unique gifts for friends and family.

← The End Is Near, the Beginning Was a Mix Bag
With Camera Fone & Available Light ‘Awesome in 5 Minutes’ Show Is Born →