Written by Vladimir Zark
[Editor’s Note: Guest Writer Vladimir Zark alleged that there were errors in the original article about his chess club, published October 4. The editor decided the one way to address the allegations was to publish a new version with changes by Vladimir Zark.] 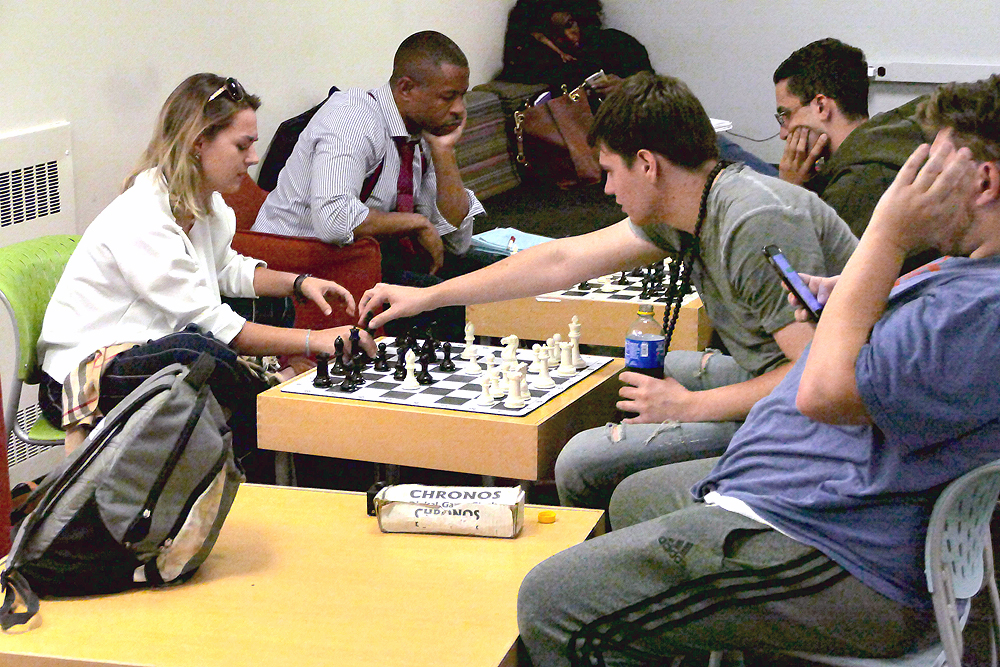 It is my pleasure, as President of the Chess Club at Hunter, to introduce myself and all the great activities members engage in at this social club.

Incoming freshmen and even long-time students can have difficulty navigating the clubs. Many clubs have obscure locations, can’t advertise well enough and aren’t inclusive enough to make room for new members. Furthermore, the social effort made to attract students to activities and clubs is practically nonexistent.

There is very poor communication between students, and more importantly, it can be surprisingly difficult to find meaningful human connection. When you go to college, you should make friends, experience the world as it is and humanize yourself. This is what we’re here for. This is why we have this club.

We at Chess Club understand that students are quite preoccupied and busy. We also understand that most who come to our tables to play are usually casual players, and not full-time experts or masters. We respect such students because they have taken the mental and emotional energy, as well as humility, to come to us and ask us for help, to inquire further and to realize their true potential.

There is no bridge between our strongest players and our weakest – indeed, we’re one consciousness of love and respect. Rarely do we have a session of chess club where somebody felt marginalized or ostracized, and even more rarely have we had a session where anyone failed to learn something. The effort chess club makes to engage incoming players, not to mention sharpen the spiritual bond between us as students, is really something else even to me.

There is also something remarkable about how we make time and can be easily contacted. It’s like our collective soul is always there. We don’t have a meeting room. We are in the roaming expanse of the third floor of Hunter West, the main lobby area by the escalators. I make it my duty to arrive there by 12 p.m. every day, though I wake up at 10 and live more than an hour away. I am essentially the backbone of the club, though I don’t take any undeserved credit for it.

The club previously was in the hands of my friend Victor, who, while being a passionate chess player, limited the club to the confines of a small and isolated classroom on the fourth floor of Thomas Hunter Hall. I mean no offense to him, but I feel that my ‘socialized’ approach has done a lot more for chess and for new members. There should not be any conflict between chess and media.

We have an active Facebook group entitled “Hunter College Chess Club.” We have flyers posted up around the third-floor area and we make an effort to engage people, sometimes going as far as yelling, “Chess Club” at the top of our lungs. Though this may sound rambunctious, it’s also reflective of the spirit of our club. We love this game. We are truly nerds. We will never apologize for it. 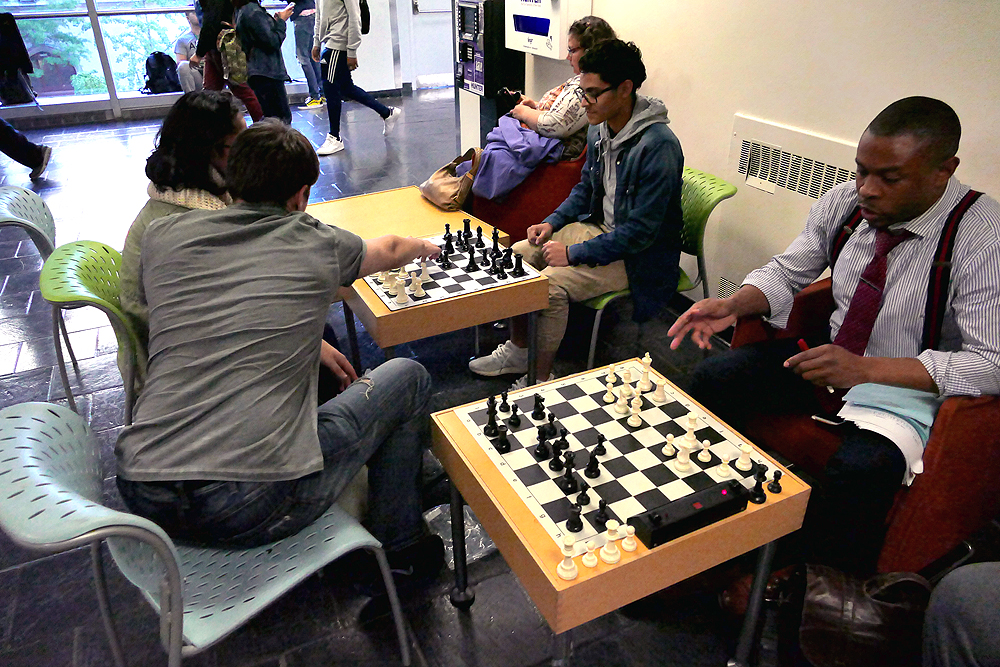 It’s also quite wonderful, to me at least, how much depth is produced over chess. We don’t just talk about chess. We talk about life, philosophy, politics, relationships, our own personal issues, the truth, and so on. We don’t talk about boring things. An interesting chess game gives way to very interesting ideas, after all. It’s to be expected that when you get people from all walks of life, you’ll see their personalities exacted in the chess game as well. That’s really beautiful.

We attract professors as well! I’ve met about four professors who have an interest in the game, and three could be considered strong players. It’s fascinating how an academic, a person trained in the art of teaching and research, will take to such a logical and judgmental game. Perhaps they enjoy the rush of competition. Indeed, I am so happy that I can find myself talking to these professors as though they’re my best friends, just by way of a simple board game. Even janitors will come and tell me how much they love what I’m doing. And I appreciate them too.

The Chess Club meets Mondays from 12-2:30 p.m., Tuesdays from 12-4 p.m., Wednesdays from 12-5:30 p.m. and Thursdays from 12-2:30 p.m. Essentially, these are my hours when I’m not taking classes, but it is unfortunate that I do sometimes get overtaken by such love for the game that I cut class anyway. If I see a new player or someone unfamiliar, I will often stop my own game to help immerse them into the experience, make them comfortable, and set them up for either a game or a lesson. If I shame or disappoint someone, I apologize.

I hope I never have a moment when I neglect a person interested in chess. Though the main goal of our club is to teach and help chess players improve themselves, our deeper goal is to help people realize their latent potential, laugh at themselves out of gentle humility and respect themselves for what they are – even if they’re not chess experts or masters now, they CAN be, and that’s all that counts. I feel that there’s this deep philosophical component to a club like this, undeniable at the core: When you engage people in competition and self-understanding, you provoke them to find their true selves. And that’s good. We love those people who come by often, and we appreciate the effort every person makes to ask me questions, express concerns, and realize their own unique chess personality, which every person has.

The Chess Club attracts very strong competition. I consider myself a skilled chess expert, a person who has devoted five serious years to the game. However, every national and international master pushes me to learn more and challenge myself. Alex Ostrovskiy, one of the strongest, 21-year-old players in New York, is studying education at Hunter. I will give him the necessary credence and respect, both as a player and a person, because he comes by and glorifies me with blitz games. 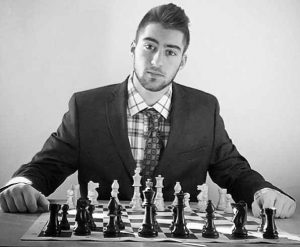 He also talks to me, engages me and doesn’t come off as a snobbish narcissist unlike many players in his skill range. I’ve done alright against him, but to be honest: He gives me three minutes to move, he takes 1, and has won about 14 out of 17 games. Two wins and one draw are more than satisfactory for me, however. But that’s because all the decency and respectfulness of Alex becomes subsumed into a cold killer instinct when he plays.

Namely, he has the capacity to turn off emotionally and doesn’t panic almost at all. It’s the quality of a true mystic and yogi, a disciplined mind that doesn’t desire anything other than a clean victory. There are national masters like Azeez Alade, who’s in the armed services and is studying for a degree in computer science, and Tyrone Davis III, a 16-year-old wizard studying at Hunter, and will likely be doing a computer science degree as well. It goes to show what kind of minds are perfect for the game! 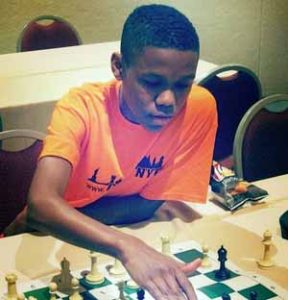 The Hunter Chess Club hopes to use its future budget for tournaments and lessons, but plans change based on the circumstances. In general, we are quite okay with equipment, as I provide two sets and two clocks of my own, but we have backup sets and clocks if need be. We are quite happy to send aspiring players to participate in tournaments, seeing that true players are born when given a numerical rating, an ELO, and begins to see their skill level scale with each win, loss, or draw that they receives. 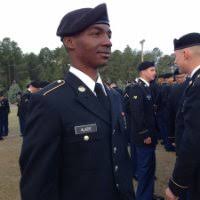 Azeez Alade, picture from his Linkedin.com.

All in all, Chess Club is a beautiful little seed that my friends and I have planted and cultivated for more than a year now. And if we could somehow become the most widespread and popular club on this campus, if not at CUNY, I’ll say that it can only help. I see so many people who see us play and passively say that they “aren’t good enough to play,” yet no one puts up those mental barriers but them. I want to dissolve those barriers, destroy the biases that make us fearful and insecure, and finally free people from themselves.

Chess doesn’t only invoke the powers of the mind, but it allows us freedom of the soul itself, a soul I don’t even know exists. But even if it doesn’t, I cannot deny that SOME soul has spoken to me many a time when I sat down and played a blitz game. There’s a stereotype that you have to calculate many moves ahead to win in chess, but I say that’s foolish. All you must do is BELIEVE in your own ability to win, use your strength of will, and battle through the oppressive limitations of circumstance.

I hope to see you at our club. We will work tirelessly until we can make you the best chess player and human being you can be. There is no reason to be afraid. You can reach out, you can ask for lessons, you can take back moves, and you can make new friends in the process. You can be yourself, I swear – that’s why this club is here for you all.

Please don’t forget that this club is for people first and chess players second. We seek to humanize you, to accept you for who you are, and to help you recognize your divine energies. You have them, especially when you’re possessed by the grand spirit of inspiration – when you play a game without mistakes without even knowing how, or when you lose but continue smiling like a winner. These are beautiful things, grand things, and we want you to know them. May our paths cross in the main area of Hunter West! May I see you come and embrace yourself. And may we all have a good time before our time is up.