A suspenseful telling of a courageous adventure of a matador chasing his dream of becoming world famous. GORED is an intimate documentary about the most gored bullfighter in modern history, Antonio Barrera. Winner of the 2015 Mckinnis Sports Documentary Award and the 2015 Raindance Film Festival’s Jury Prize.

With the support of his father, Barrera made his childhood dream become a reality. He began to perform in many arenas, but has not been the most graceful matador. Barrera is known for being stabbed and pierced with horns more than any other bullfighter known to date, 23 times to be exact. Undergoing nearly 17 surgeries, Barrera has suffered many broken bones, but refuses to give up on his dream.

A dangerous obsession, Barrera has always been content with the possibility of dying doing what he loves, until he started a family. Since then, he has become fearful for his life. Being a husband and a father, Barrera has suffered with the thought that retirement is near. He wants to continue his lifelong desire of bullfighting, but also understands that he has barely escaped death dozens of times.

A classic conflict of desire vs. survival, Barrera chooses the retirement route after understanding the severity of his fate in the ring. Of course, Barrera refuses to give up without a final fight. Depending on how he performs, another tough fight may very well become a life or death situation. One last question remains: Will he survive his final performance?

Mizrahy has created a stunning film, loaded with intimate details of Barrera’s personal life. The amount of real footage obtained by Mizrahy of Barrera’s gored bullfights are fascinating, and was by far the most interesting part of the documentary. This graphic footage was needed to set the emotional tone that lasts throughout the film.

A gut-wrenching documentary that shares the emotional story of an underdog facing extreme consequences, GORED is a must-see film that will keep viewers glued to their screens, hoping that Barrera will continue to make it out alive.

** This film is available on BluRay/DVD, and also has been released on iTunes, Amazon, Google Play, and Vudu, throughout North America, Latin America, Spain, and the United Kingdom.

Natalie Lally, covering the 2016 Tribeca Film Festival, can be reached at natalielallye@gmail.com. 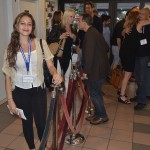