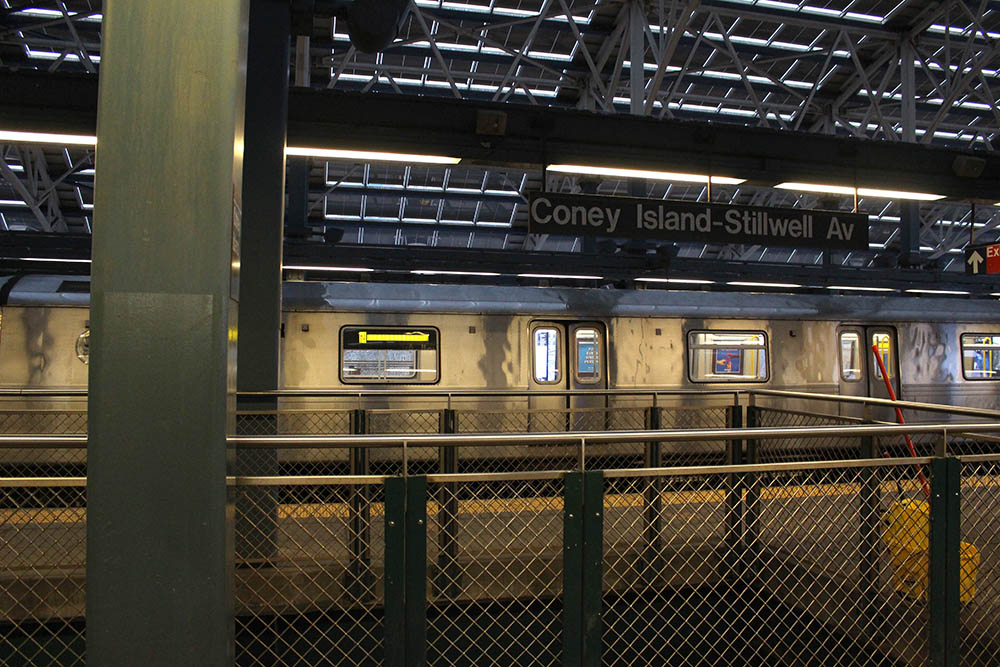 An early leg of a long commute. Picture by Dana Kaldy.

It’s February 8, a Tuesday morning during the second week of classes, and I’m on a B Train to campus from Sheepshead Bay, Brooklyn, and a scrawny, unkemptly dressed young man is stumbling through the subway car. A light grey shirt blotted with stains and dark black markings clings loosely to his frame. His hair is matted with equally unkempt curls.

Twenty minutes into my commute, he shouts about Jesus.

“Jesus is in me. I am him. And I’m here to save you all. He sent me and I’m here to give you this message,” the bedraggled straphanger announces. He maneuvers around train poles as he continues to recite what sounds like a well-rehearsed sermon. A middle-aged woman sitting in front of me is glued to her cellphone but neither this nor her face mask hide the disapproving eye roll she gives at the mention of Jesus.

“Please,” he continues, “if you want to be forgiven, you need to repent now.”

He lowers the volume of his evangelical pitch and begs, “Please listen to me;  please, I’m here to help.” At times his voice trails off. To my left, everyone seems immersed with their phones. They don’t give him a second glance.

Looking around, he solemnly exits out of the train door in front of me but not before whispering, “Please, I can do this in any language you want, English, French, Spanish, German, Korean.”

Not even 30 seconds later, two men enter the car. One holds a dark red accordion and the other a plastic-stringed acoustic guitar. They serenade in Spanish, waltzing gracefully through the car and smiling as they move. They capture the hearts of two women who pull out dollar bills from their pockets.

When I don’t have the time to buy a morning cup of coffee, the tithe-seeking subway performers and troubadours provide alerts sufficient to keep me awake and vigilant on my way to a 12:45 p.m. psychology class.

When I hit campus at 68th Street and Lexington Avenue, I am usually ready for the transition from crowded cattle cars to a campus swarming with students, faculty and staff, and I’m always awed by the lack of space. With more students attending classes in person this semester, it’s hard to overlook how crammed this campus is.

The library overflows with last-minute study sessions, happenstance meet-ups and random encounters of friends in the halls. Students throughout the campus can often be seen sprawled on the floors hunched over laptops.

I, like several other WORD reporters, have been assigned to write a first-person account about the reopening of Hunter for on-campus courses. Mask restrictions are being modified, though a lot of us students still mask up. 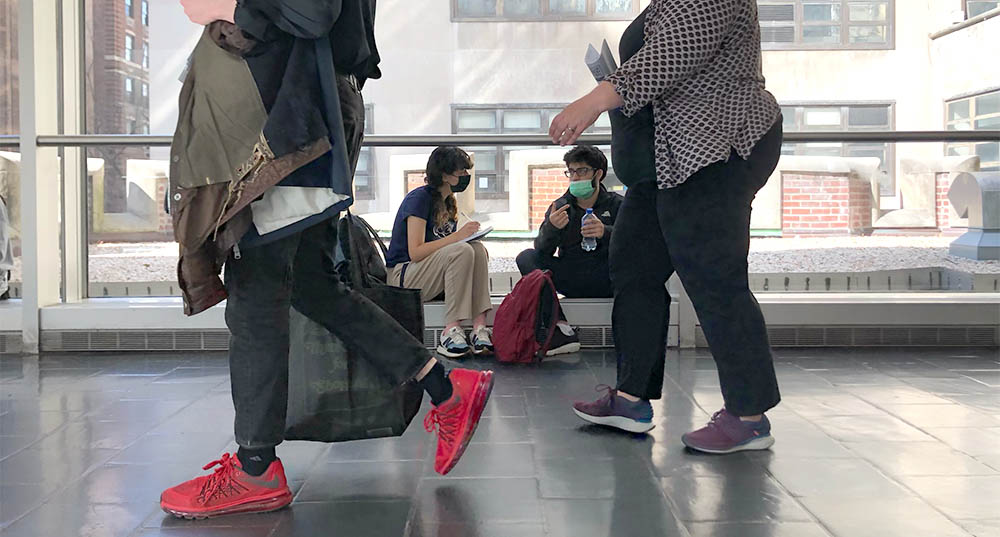 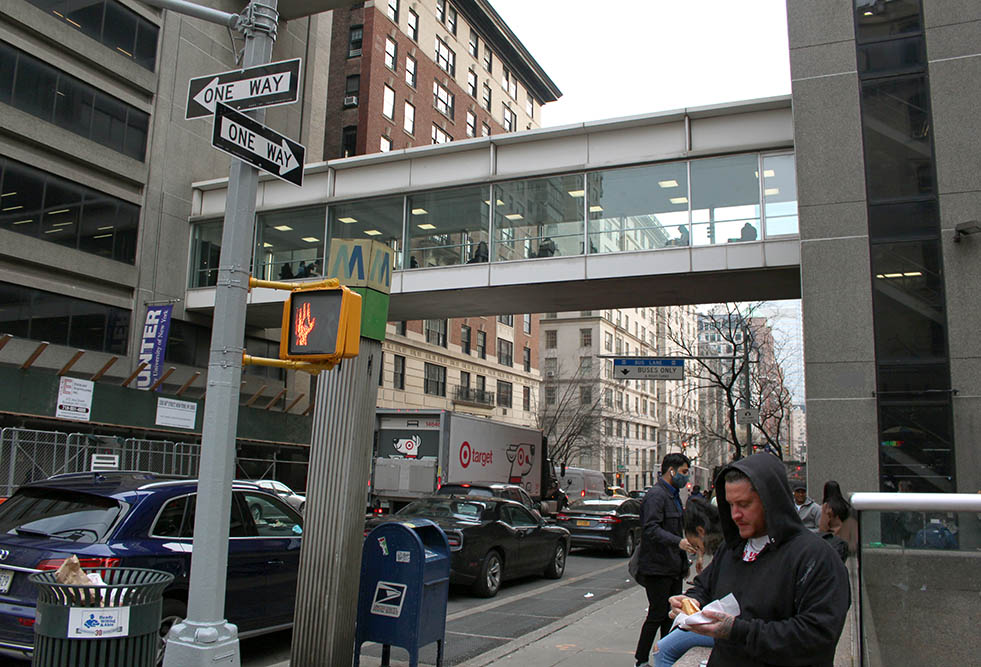 “Everything is too crowded. We can be catching COVID and you wouldn’t even know,” said Nyya Collins. The media studies major emphasizes her point by demonstrating how she makes her way through teeming crowds on the escalators. She called it doing the “crouch-and-shoulder thing,” that is, swinging her elbows in the air, as she ducks, body arched backward. She seemed pleased pantomiming her technique.

Collins, a media studies major, is studying journalism and double minoring in theater and English. She once majored in English but switched during the Pandemic. A first-generation, soon-to-be alumna, the 22 year old wants more than what she said her neighborhood of Crown Heights has to offer her.

“I won’t settle for less,” she said. Collins’ future plans include marketing internships with Broadway theaters.

Another student said he enjoyed the clusters and crowds. Furzan Asim, a physics major, transferred to Hunter this semester from SUNY Maritime College and described how pleasing the transition was for him.

“At my other school there weren’t many people,” he said. “In some classes, I would see a max of like five people. So, this is a breath of fresh air for me, honestly, seeing more students.” 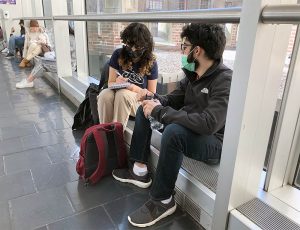 CUNY announced March 4 this semester that students don’t have to wear masks.   “I’m still wearing my mask,” said Nicole Jara, 21, a biology major who lives in Corona, Queens. Earlier in the day, she said, she was starting an exam when her professor told the class they could take off their masks. Not one was removed.

“Why take off the mask when there’s people around you,” said the junior. “It’s also like a moral obligation. Everyone has a responsibility,” she said in her interview around noon on that section of the third-floor skybridge nearest the West Building. “I always have it on me. I’m not taking it off on the train, not at all.”

In the beginning of the semester, I imagined, metaphorically, there would come a time students would experience that silence before the storm of exam and term paper deadlines. But midterm season is upon us, and that onslaught is approaching. Yet, The World Cup Cafe on the third floor of the East Building, with its tantalizing assortment of empanadas, coffees, sandwiches and other tasty delights, can serve as a temporary oasis for those in need of sustenance to keep them lucid for the academic challenges ahead. 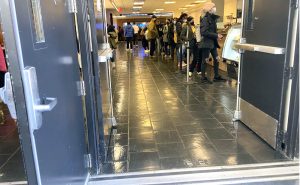 Dana Kaldy can be reached at dkaldy94@gmail.com