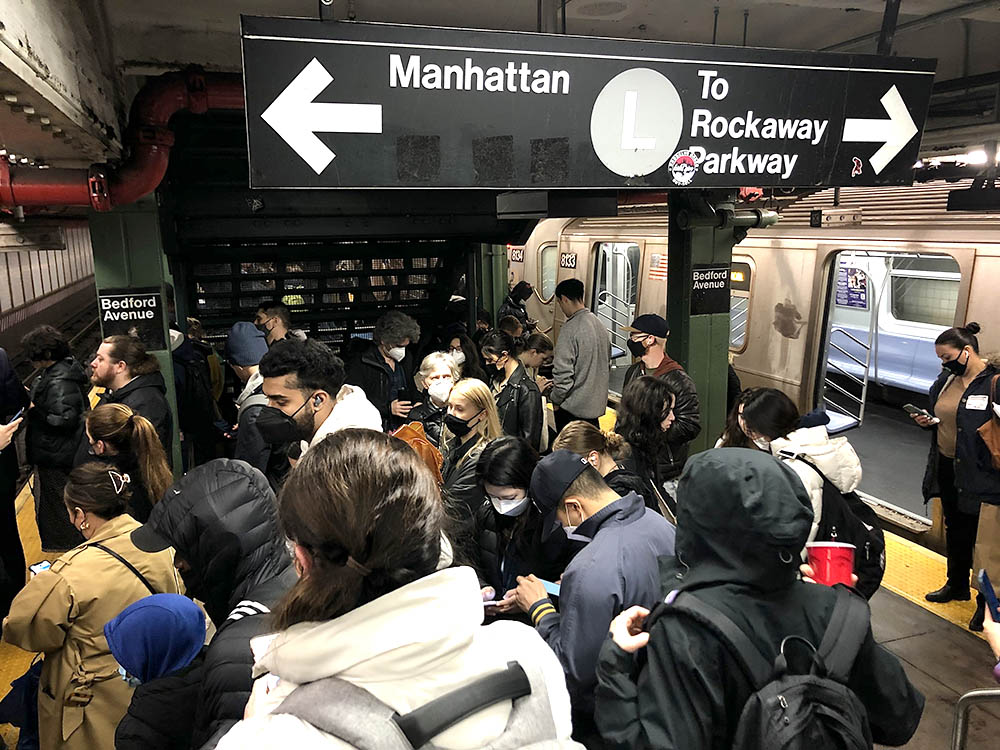 My 15-minute walk Monday, February 7 to the Bedford L Train subway stop for my commute to the main Hunter campus at 68th Street and Lexington Avenue, Upper West Side, Manhattan, required caution that day due to ice that hardened over the cold weekend.

As I walked north towards the station, my eyes glazed over the plaintive signs of the harsh consequences of the virus. For example, the four corners of South 6th and Bedford in Brooklyn were staked out by rapid testing vans whose open doors were sealed with protective plastic covers; all but one appeared vacant. And restaurants lining the street offered their own outdoor dining huts, a reminder of the times when it was considered too dangerous for customers to cluster inside.

Silence seemed to hang in the air of my subway car this date, and the head count soared as straphangers poured in at every stop along the way to Union Square stop where I and many other passengers were to get off.  Our car sped past the First Avenue station where I spotted two unmasked police officers standing on the platform with their hands in their pockets. At Union Square, I caught the Number 6.

Between the uptown and downtown Q express train stop, a man sat on the ground next to a suitcase and several milk cartons full of what I believed were his belongings. He was smiling at his cellphone. His left arm had been amputated, the other hung exposed in his yellow cutoff shirt.

My 6 train bound for Pelham Bay Park, with Lottery Ticket ads posted throughout my subway car, rattled its way north. In my peripheral vision, I saw a man wearing a pink medical mask dozing off. Every so often he rubbed his shiny head and checked the stop we’re at. At 51st Street, short video clips filled a screen showing women in lingerie engaged in everyday activities: One licking a spatula dolloped with frosting while the other was doing yoga.

I often wondered how effective these advertisements were since passengers seemed too absorbed in their own thoughts to give the ads a second glance. I’ve yet to see a straphanger watching the videos. I was recording detailed notes of the trip for an assignment I and other WORD journalists were doing for a first-person account about the early weeks of the reopening of the commuter campus for classes.

Besides taking descriptive notes we were responsible for interviewing students about their thoughts and feelings and experiences. Hunter, like all the other City University of New York campuses, officially reopened January 28, 2022. 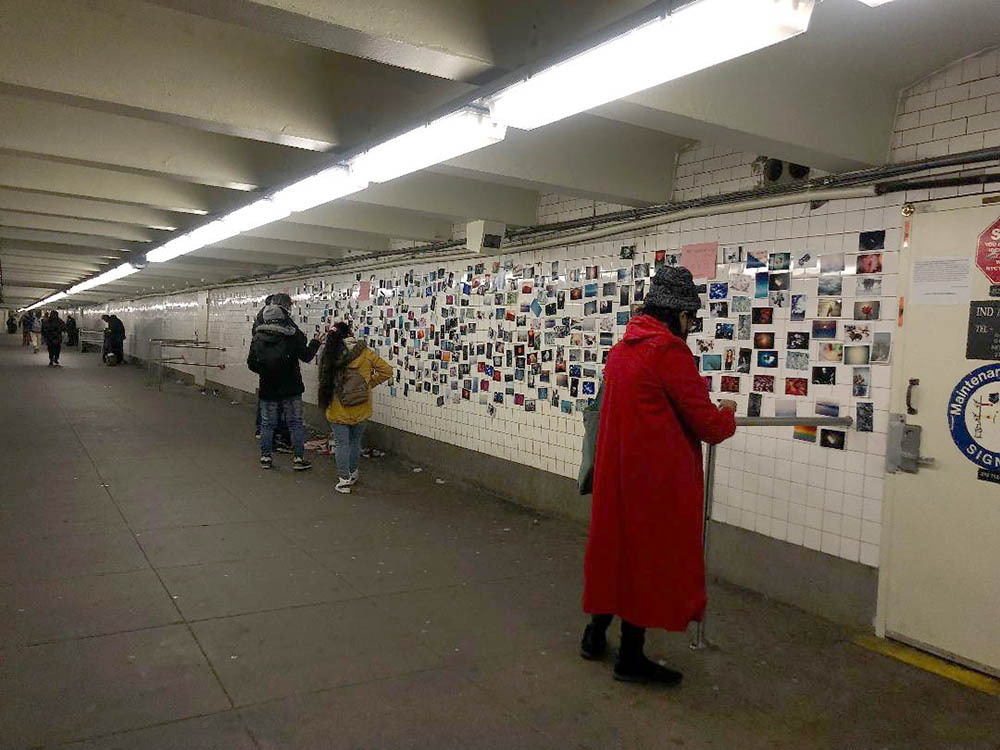 Before arriving at my last stop, I heard a plea for money. I couldn’t make out the source, but the spiel was familiar. No one around me looked for the man sharing his plaintiff plight: “You gotta be saying to yourself right about now, not another person asking for my hard earned cash. You deserve some honesty, I’m trying to get a job. Can I ask if you have it in your  heart to spare some change and change my life?”

The commute to Hunter College at 68th Street and Lexington Avenue from the Bedford L Stop in Brooklyn takes around 40 minutes.

The first student interviewed for this article, 20-year-old Gregory Victorino, a biology major, lives closer to Hunter than I do. His home is located on the Upper West Side. Victorino, returning for his second semester, said he was happy to be back. He said that it had been hard for him to focus on his online classes and that he hadn’t been able to connect with classmates virtually during that period when the campus, like much of New York City, was shut down.

After signing up for on-campus classes this semester, he still was required to deal with an online course. His classical mythology teacher, because of a doctor’s recommendation, switched to virtual meetings for the rest of the semester due to health concerns.

Regarding his concerns about being infected, Victorino said that he felt comfortable on campus. “If it happens it happens. You can’t really worry about it too much anymore,” he said. Victorino was interviewed near the escalators on the third floor of the East Building. Sitting between the bay windows of the third-floor corridor, he kept a safe distance from other students.

Victorino’s comments mirrored closely the comments of Portia Leggiere’s, whom I interviewed following an art class she’d just taken. Leggiere is 20 years old and majors in developmental psychology with a concentration in women and gender studies. 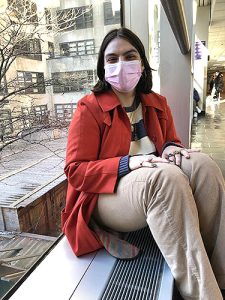 “I’m a woman, I’m a gay woman and super into feminism and intersectionality and human rights,” she said early in the interview. Sitting in the window lined bridge connecting the West and North buildings, she placed her canvas tote on the ground and pressed her coral trench to her body as she sat on the metal vents beside me. Leggiere said she found her path in school because of a love of Criminal Minds, a TV crime drama series about the Behavioral Analysis Unit of the FBI that profiles suspected criminals to anticipate their actions as well as understand their motives and, of course, prevent crimes if they can.

Said Leggiere:  “I know it’s a little cliché but ever since I watched Criminal Minds I was like, hmm this is kind of the direction I’ve always wanted to take it in. Studying serial killers and addressing mental health in the criminal justice system and just what leads someone to be a serial killer or a rapist. That’s why I chose this specific track of developmental psychology, because a lot of that connects to childhood and relationships with parents.”

Her commute was easy, she said, about her 15-minute subway ride from her home on East 95th in Manhattan. Comparing the current spring semester to her last, she said she was experiencing the closest to a normal college experience since the beginning of the Pandemic. “I feel so good being in person this semester. I know it’s a little bit of a fault of my own, but online I was not engaged in school, I did not feel like I was getting a great quality of education,” she said.

Leggiere’s words resonated with me. My experience with online schooling inspired less engagement; my room at home offered endless distractions. I contracted COVID over the break, but now I feel safer for the next several months because I believe my antibodies are at their highest.

[Editor’s Note:  Center for Disease Control and Prevention: Test for Past Infection] 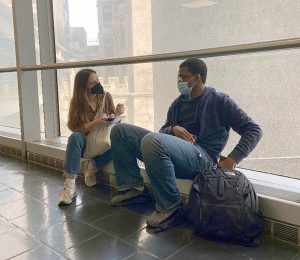 Katie Lambert Interviewing student about the reopening of on-campus classes and dealing with the Pandemic.

Katie Lambert can be reached at CATHERINE.LAMBERT@myhunter.cuny.edu

← Go Forth and Seek, She Was Told, And, Thusly, She Stumbled Upon the Hindu Students Association
“Please, If You Want to Be Forgiven, You Need to Repent Now” →