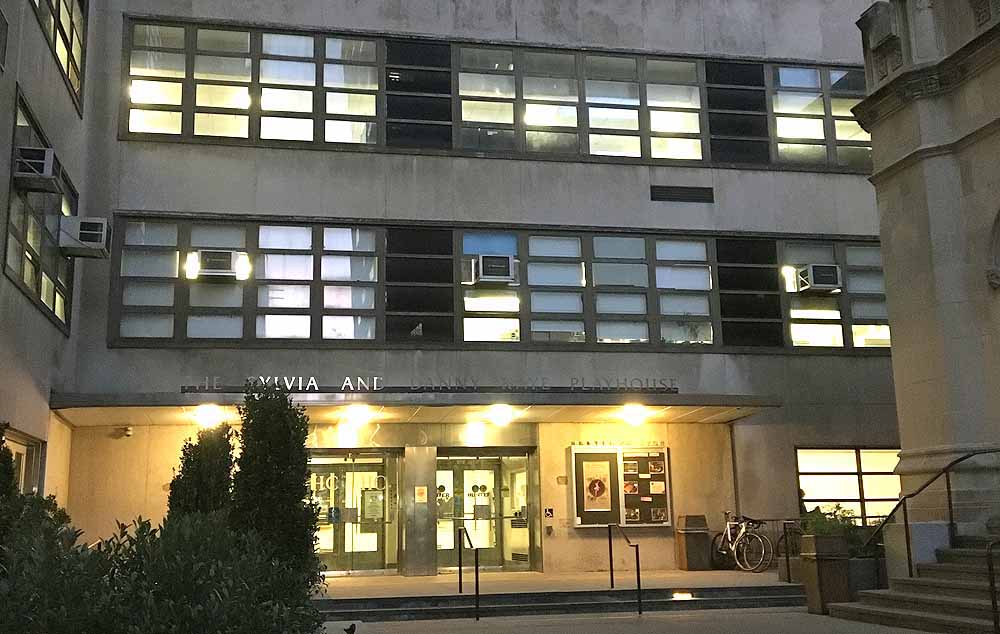 No loss for opinions inside these hallow halls about Colin Kaepernick’s crusade. Picture by Olivier Dumont

A little over a year ago, San Francisco 49ers quarterback Colin Kaepernick took a knee  during the national anthem to protest police shootings and racial discrimination against innocent black lives in black neighborhoods. Now, Kaepernick is jobless and out of the NFL. He is suing the NFL. Though his protest has not only spurred other players to engage in nonviolent protests this season, whether kneeling or sitting on the bench, it has also led players to raise their fists as well as interlock their arms with one another during the anthem.

For the first time ever on Sunday, September 24, coaches interlocked arms with their players, some even taking a knee with their teams and others, such as Steelers Coach Mike Tomlin, delaying their teams from taking the field. The 24th was also the same day and game week some team owners joined their kneeling and arm interlocking players on the field during the national anthem. However, it has not always been very clear as to what is being protested by the players, coaches, and owners.

Several Hunter students, some who are campus leaders, were interviewed about their opinions about the protests and demonstrations inspired by Kaepernick. “I think it’s fine,” said Michael Mejia, a 21-year-old, Philadelphia Eagles fan and sociology major who lives in Yonkers. He was sitting near the seventh-floor sky bridge that connects the top floor entrance to the library in the North Building with the West Building. Wearing blue jeans, black vans, and a grey, long sleeve sweater, Mejia also said, “I think they have the right to express themselves. It becomes visible so that everybody can see that it’s not just a working-class problem, celebrities are in it too, people who are getting paid millions are acknowledging it’s a problem.” 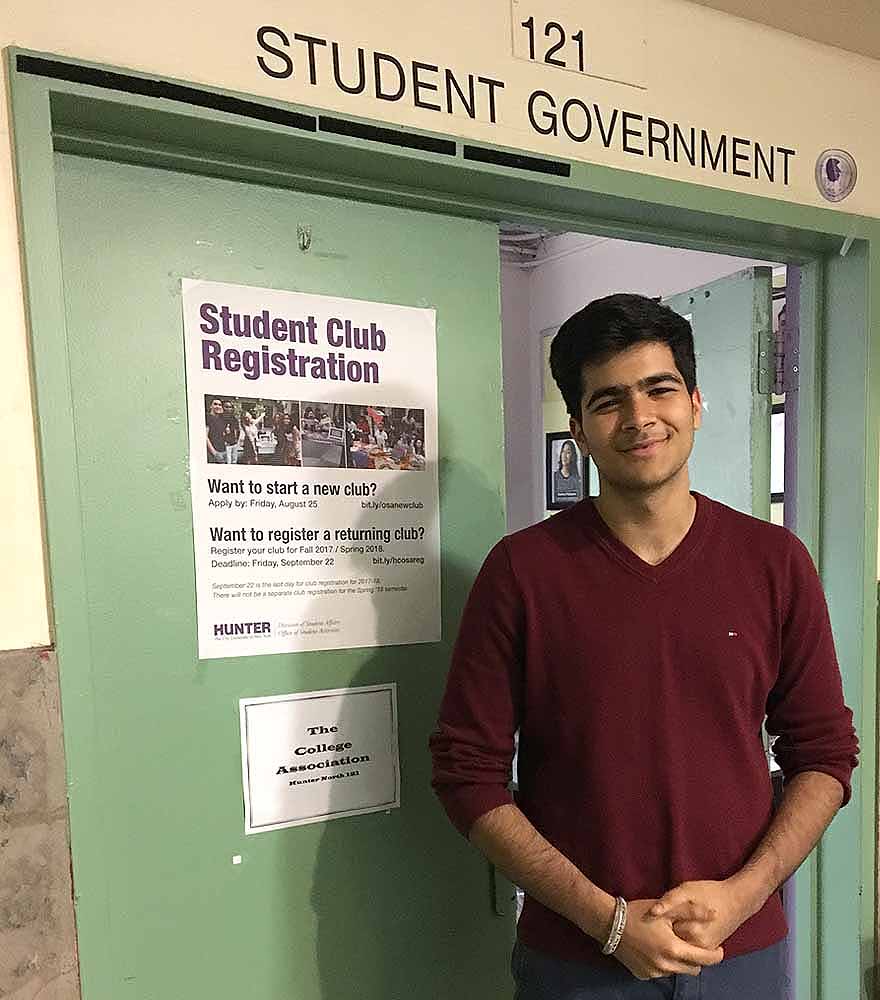 Intzar Singh, the Financial Commissioner of the Hunter Undergraduate Student Government, expressed support for the players and the kneeling protests. “At the end of the day, they’re people, they believe in certain things, they have the right to protest for certain things,” said Singh, a student of Indian decent, standing at least 6-feet-2, with black fluffed up hair, wearing a plaid long sleeve shirt and light brown pants.

Singh lives in Queens and is a double major in mathematics and theater. “Donald Trump said that they should be grateful for what they have. A lot of these people come from low income families so they understand firsthand, the type of society that’s built for people of color and the oppression they have faced throughout their career.”

Ariana Rosario, a 20-year-old history major who lives in Richmond Hill, Queens, said, “I think it’s kind of in between. There’s definitely players doing it because of him (Kaepernick), but I feel like there’s players that are doing it, not necessarily to stop the social injustices like the shootings, but also to do it against Trump.”

Rosario was interviewed where she was sitting on the side of the third-floor sky bridge. She wore a dark green jacket and light blue jeans, with large hoop earrings dangling from her ear lobes. She has curly, light brown hair containing streaks of blonde highlights.

“A lot of these coaches and NFL owners were flip-flopping, which is something I personally didn’t like,” said Singh, who provided an example of Dallas Cowboys owner Jerry Jones. “He kneeled the week after Trump said that statement, that players should be fired if they kneel, and then the following week, he said every Dallas Cowboy player needs to stand up for the anthem.”

Earlier in the season, Trump also said that fans at the game should walk out the stadium. This statement by the President fueled a debate with NFL fans and students about what the flag symbolizes and represents, and if such protests are disrespectful towards it and the nation. Rani Allan, Senior Senator of the Undergraduate Student Government, said, “For the NFL players, especially for the black NFL players, it resembles seeing their own black brothers and sisters being murdered.” Allan is a political science major of Palestinian and Lebanese descent who lives in Queens. “For them and for the black community overall, it resembles the racial oppression and racial marginalization that all people of color, specifically the black community, have faced all of their lives,” said Allan, wearing a white and light blue, striped, collared dress shirt and dark blue jeans, sitting at a table on the fourth floor of the library.

Francesca Royal, Sophomore Senator of the Undergraduate Student Government, said that Trump’s statement was unfair. “I think that Trump doesn’t want people to be upset, he doesn’t want these players to influence the people who elected him and the rest of America into thinking that he’s a bad person or into thinking that people are discontent with the way America is,” she said, sitting at a study table to the right of the library assistance counter on the fourth floor of the library. Royal is a 20-year-old, double major in economics and public policy who lives in Manhattan.

“I think all the more power to them that they’re taking a stand, and I, 100 percent, do not think they should be fired because it’s a freedom of speech thing. Trump himself has made it very clear that freedom of speech is something that he believes in, I mean you see his Twitter,” said Royal, wearing a long-sleeve, grey Hunter Hawks sweater and a pair of thin dark grey sweatpants.

Eduardo Garcia Torres, 18, a sophomore who lives in Manhattan, said, “I don’t find it disrespectful at all.” Torres, dressed in a black hoodie with black athletic shorts and sitting on the seventh floor sky bridge, also said, “They’re just standing up for what they believe in, and if they feel something is wrong in the United States, then they should definitely speak out and that’s what they’re doing by taking a knee.” 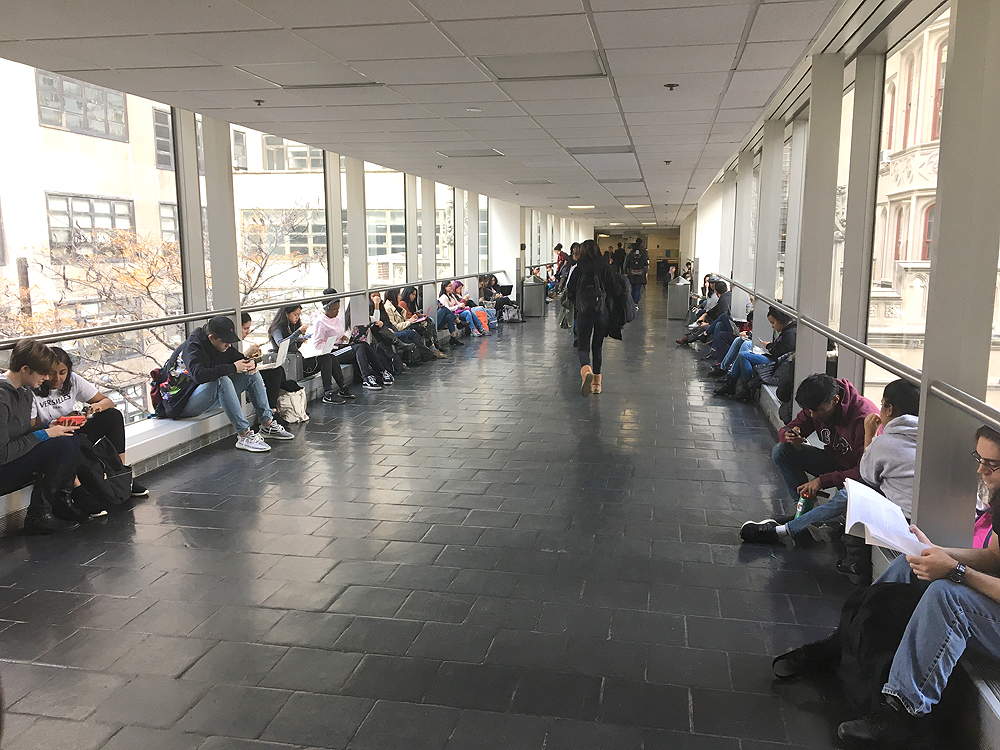 The third-floor crosswalk for the North and West buildings also serve as an area for passionate discussions. Picture by Olivier Dumont

Political science major Anthony Fitzsimmons, said, “I would assume they see kind of an illusion, a false sense of equality and freedom.” The white 20 year old from Long Island, wearing a dark blue T-shirt and some blue jeans, also said he believed the players’ kneeling actions were disrespectful, but he expressed empathy for their protest as well. “I think he’s disrespecting the flag a little bit,” Fitzsimmons said about Kaepernick. The student was interviewed as he was sitting on the side of the third-floor sky bridge near the main library entrance, his hair slicked up in small flip and he was sporting a clean cut beard. “But in his mind, I guess he’s trying to reveal certain aspects of the people who watch the NFL, what type of people they are, or just more generally, what’s going on in the country.”

Several interviewed students questioned Donald Trump’s tweets and position on the protests. “The main problem I have with the way that President Trump handled it, is that you don’t need to call someone a son of a bitch for kneeling,” said Singh, recalling Trump’s first attack on Kaepernick last year. “You don’t need to take personal attacks on someone that’s protesting a public issue and you don’t need to attack their personal character for something that they’re doing peacefully. I think he has every right to say it, should he say it? My personal opinion is no.”

Interviewed students, including Allan, said the NFL should be a platform for political expression. “I applaud the NFL players for choosing the stadium to express their own political sentiments because they have to mainstream these social justice efforts and their own opposition towards white supremacy,” said Allan. “When there comes an opportunity to showcase it in front of millions of people, if not, hundreds of millions of people on national television, then, yes, they have to go for it. Where else would you find such an opportunity.”

SBNATION: Everything You Need to Know About NFL Protests During the National Anthem

But with the season progressing week by week, so has the kneeling. Students wondered what the next step could be for the protesting players, some even questioning whether there will even be a next step. “Ultimately, I think a lot players are realizing, hey, this might cost my job,” said Mejia. “There might not even be a next step and I think kneeling is just right.” If threats from the NFL persist, Fitzsimmons said, a political approach would be a good next step. “Maybe they can get out there and instead of using the NFL as a platform, get out on the streets, go do some real grassroots politics and try to inspire everyday people instead of being on a TV screen.”

Other students, such as Rosario, believed kneeling could be just a beginning. “It just all started with the game, but it can be so much more than that,” Rosario said. After reporting and researching this topic for this story, this reporter believes Colin Kaepernick has done nothing wrong, and, if anything, the unemployed quarterback has resorted to the most respectful way to protest in the NFL and has every right to file his grievances against the NFL after the league has kept him out of a job by labeling him a malcontent and a distraction to the game of football.

Although President Donald Trump exercised his First Amendment right, he was disrespectful to players expressing their First Amendment rights. This reporter believes that NFL owners and coaches supported and participated in symbolic actions because of Trump’s attacks on the league. Innocent black lives have suffered throughout this nation because of police violence, and taking a knee is addressing the players’ concern. But if football players really care about this societal problem and want to instigate actual change, it is in the best interest for all that more white NFL players join in on the kneeling and sitting protests to support their black teammates who are merely looking to feel safe and respected in a country they call their home.

Olivier Dumont can be reached at Olivier.Dumont03@myhunter.cuny.edu