THE COLUMNIST (DE KUTHOER) – Publicity Blurb … “follows an author (Katja Herbers) who receives anonymous death threats on social media and decides to take revenge. The film was released on January 8, 2020 in the Netherlands.”

Attention Potential Audiences, the blurb is summarily misleading even though it did tickle this reviewer’s imagination. THE COLUMNIST is so much more than a revenge flick about a female writer’s bloody revenge in a Holland community.

Marketed and promoted as a black comedy, THE COLUMNIST (DE KUTHOER) seethes cynically with dazzling flourishes of the transcendent and the ghastly horrific.  It is directed with stylish panache by DIrector Ivo van Aart whose main protagonist has an imperturbable style for the righteous retribution she inflicts on adversaries. Whatever its genre, join van Aart’s fan club. If THE COLUMNIST cult following is queuing up, join that too. A sequel? You don’t need this reviewer to tell you what to do. A TV series? So say we all.

Katja Herbers is the svelte Femke Boot, a single mom and a successfully well paid writer, experiencing the torturous bane of a writer’s existence, writers block. Besides her own self-torture, she feels the heat of unrelenting button-pushing by her publisher – unsympathetic if not very dismissive – who wants another money-maker bestseller from Femke Boot no matter the psychogenic toll.

There’s more: Femke Boot is being maliciously assailed by misogynistic Twitter trolls, some if not all, in the grips of oedipal rape-fuck fantasies that have them in heat and stalking her like sexualized cyber velociraptors on steroids no less. Yet, they don’t realized that they are signing themselves up for the endangered species list of a remorseless, trophy-collecting serial killer tracking them on Google as they stalk her on Twitter. For those of us who believe in righteous revenge, the kill scenes are Oh là là!

Twitter trolling causes a psychogenic toll no matter where she. Courtesy of Film Movement

Katja Herbers’ Femke Boot collects trophy digits in gorgeously horrific scenes that caused this writer to avert his eyes, maybe, once or twice; okay, maybe thrice or thrice-plus-one – not that they were gratuitously gory but ghastly none the less. In Dutch, with English captioning of hypnotic scenes of virtuosic acting and directing and lush cinematography, THE COLUMNIST can push buttons on every level of your film-loving, mind-body-soul film experience. There are scenes that you will want to revisit, lines that have to be reheard.

The way that the svelte, sometimes smoldering, Femke Boot, rises to the occasion to confront Twitter Trolls prompted a flash for this reviewer: A Jeckell-Hyde animus unleashed on a misogynistic, bourgeois society by a Dutch Everywoman who found her muse – and a remedy for her writer’s block. Don’t be surprised at incidents of unexpected collateral damage but to say more would spoil the delicious pleasures awaiting audiences even those who aren’t into righteous revenge.

Is THE COLLECTOR Sneering at the Pretentious Mores of the Danish Bourgeoisie? 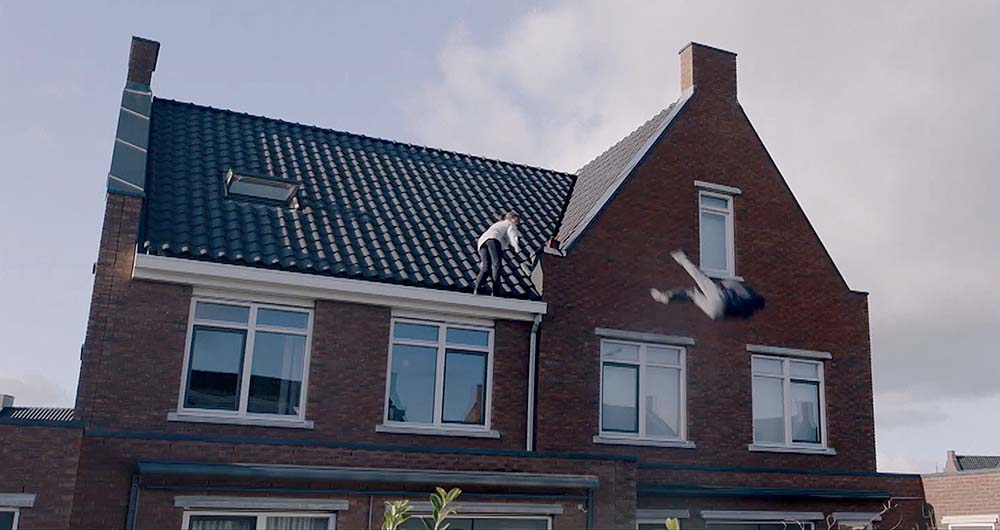 There he goes.A soon to be first trophy when he eventually hits the ground. Picture courtesy of Film Movement

Wrapping Up: Plot & Subplot Lines That Should Be Mentioned But Dare Not Spoiled

– Femke’s daughter, played smartly by Claire Porro, is thrown off the student newspaper of her high school, setting off freedom-of-speech claxons, subtle and otherwise; and the mom-daughter-relationship as well as the proverbial like mom, like daughter should not be overlooked.

– Is Femke Boot a cold blooded or hot blooded assassin? This writer doesn’t really know because of the sangroid she exudes. But she most definitely is murderously pissed off, and, has this imperturbable manner for an assassin who dispatches her victims. Even when wielding an ax.