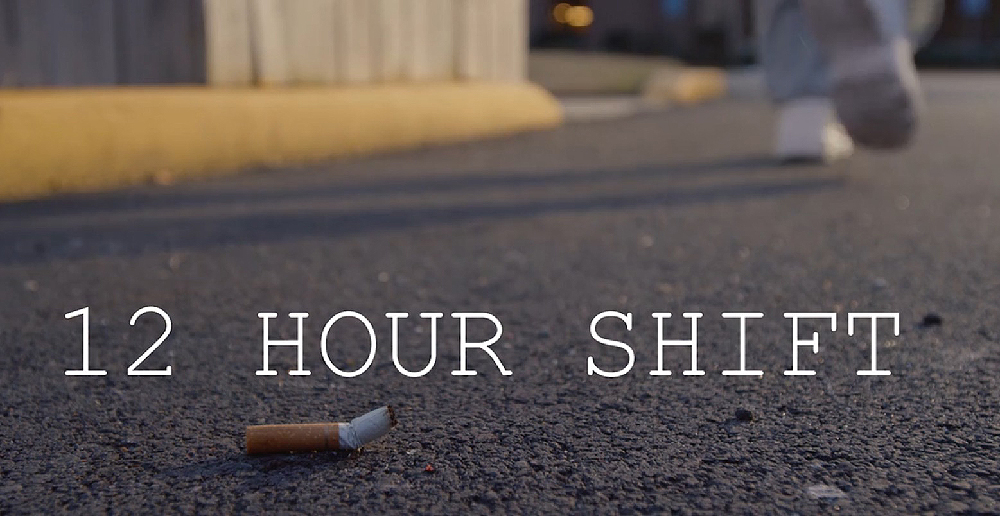 Gregg W. Morris, the WORD – Cowabunga! Audacious and raunchy with panache, this bite-me movie spits in your eyes – and winks at key moments, of which there are a lot. The film score rolls, though I’m clueless about its roots: Symphonic+ rock? Audiences should know all this if they’re only comfortable with movies that don’t rattle their sense of good and evil, the moral, immoral and amoral. Hint: Can they handle a poop moment going down outside a bowling rink in a when-you-gotta-go-you-gotta-go scene. 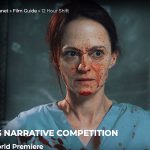 A few minutes after the opening, I was thinking, this isn’t my kind of flick. Wrong! And I quickly got on board. I had been led to believe, or allowed myself to believe, that 12 HOUR SHIFT was in the vein of some film genre close to TV’s M*A*S*H (1972–1983). And a publicity photo [right] of the blood-smear face of veteran actress Angela Bettis  added to that impression.

Ha! I’m certain I had been sensitized by copious news footage of the legions of medical, nursing and EMT spartans fighting their intrepid good fights in hospitals and wherever they were dispatched. [A Digressional Editorial Note: They aren’t being paid enough for their hazardous duties no matter how much they are saluted]. But this movie?

12 HOUR SHIFT opens with actress Angelis Bettis’s nurse Mandy puffing on a smoke out side of the hospital where she’s about to start a double shift. She banters with another nurse nearby and the banter soon segues from everyday collegial to derisively bitch-eee – but not dukes up, nor in-yer-face. A sardonic and scathing tone with intense mutual disrespect persists throughout the movie between almost all the main characters.

Mandy, addicted to drugs that she has been stealing for a long time from the hospital, heads inside and sets about her regular round of official duties as well as her side gig of making sure that a black market organ trading operation goes smoothly. As she makes her rounds, she keeps an eye out for a potential organ of the day and makes sure, whatever the selection, that it is delivered to a designated pickup driver and that’s that. So much for the hippocratic oath she inked to get her job.

Today it’s a kidney. A few other unscrupulous hospital staff are involved. This date, however, it’s as if a mercurial god of a nether region has decided that whom it wants to rake over the coals must first be driven crazy or made more crazy than they already are. There are many of the chosen. Regina, played by savvy veteran Chloe Farnsworth, is Mandy’s cousin, supposedly. The god does his thing, Regina screws up the pickup and delivery, and the narrative speeds up, taking audiences on a trip through a maze of byzantine plot flips, twists and turns with Mandy and Regina trying to survive the day and beyond. Regina especially seems doomed because of her incredibly dimwitted actions but Chloe Farnsworth makes her character’s dimwittedness artistically composed in ways this reviewer won’t describe here.

Smart directing and acting keeps 12 HOUR SHIFT on an elevated plain of direction and acting that will keep audiences entertained, mercifully keeping them from the dreads of the insipid slapstick it could have been. No guffaws here but …