My squib is based on a vibe from the opening for the TV series The Outer Limits (1963-65). For all of you who will be sighing, fidgeting, writhing and squirming at what you will be seeing on the screen: Remember, it’s just a movie, though your brain and senses will be put through the paces. Keep this in mind and don’t be afraid to chant aloud (or whisper) even while wearing your mask: ‘There is nothing wrong with my brain –  Director Craig Center and Writer Robert Dean Kelin are in control – I can deal with it.’ Try to kick back, to not be disturbed at disturbingly grisly scenes of brain-disturbing horror.

Surprisingly, there are no gratuitous scenes of viscous gore and horror-film slashing schlock, yet, many in the audience may choose to avert their eyes at particular horrifying moments. Beware, however, that too much averting of eyes may be hazardous, cinematically speaking, to your horror fear entertainment – which, believe it or not, say psychologists who study film, the more you see the better the healthy benefits.

Beware of the Beasts

6:45 opens with Bobby Patterson and Jules Rable passionately making the beast with two backs in their room at the Cosy Nook inn on the tourist island of Bog Grove. A primal beast of a different stripe (spectral, garbed in black and weird opaque eyes that glow) mysteriously appears several scenes later as the couple in a tourist-trekking stroll away from the inn, pauses for a moment to yadda-yadda about how much they love each other, how much they need each other and so on.

Bobby surprises Jules with an engagement ring. At that golden moment, the beast of a different stripe, appearing out of thin air, grabs Jules in a headlock with one arm while its other arm, its hand gripping what looks like a boxcutter, sweeps in one big arc across her throat, blood gushing here and there – just before the beast turns on Bobby and snaps his spinal chord. 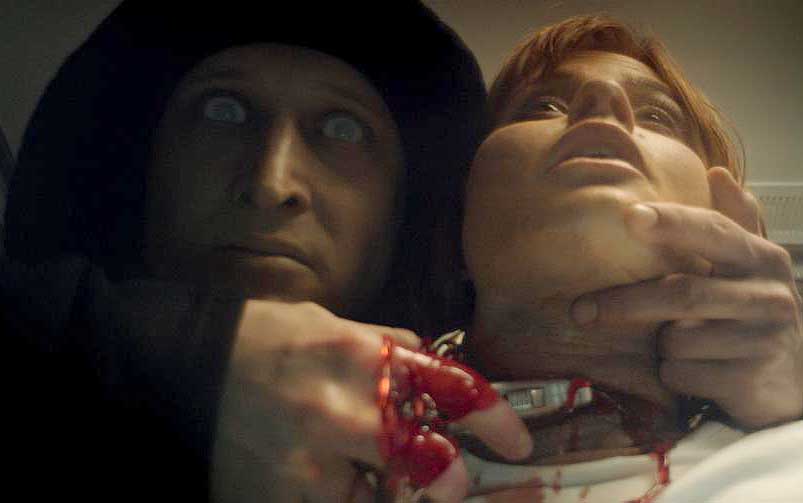 Comes the next scene with the alarm clock in the couple’s room of the Cosy Nook inn on the island of Bog Grove, going off at 6:45 a.m. with Bobby and Jules alive and kicking for the next time-looping cycle come what may. Will they be ready? Will you be ready?

Film publicity and promotion references to GROUNDHOG DAY helps get viewers in a time-looping frame of mind. However, this reviewer experienced cinematic déjà-vu image-gut-thumping shards of directors and films (PSYCHO, Hitchcock, MEMENTO to name a few). Note: There wasn’t one point in GROUNDHOGSDAY when I was on the edge of my seat and I only needed to catch a rerun or two to satisfy my cinematic angst, that is, that I didn’t need to see it again, though I enjoyed it, because I had seen and experienced everything that film had to offer.

[Director Craig Center in a Q&A with this writer explains how he and his crew took the vibe of GROUNDHOGSDAY to another level of cinematic dimension of time, space and viewing. The Q&A is in the works].

6:45 is the kind of movie that psychologists who study film say we really need in these times of a menacing global PANDEMIC of apocalyptic proportions. Summarizing the studies: Watching horror movies and others of their ilk causes the brain to release cortisol, the stress hormone, followed by dopamine that produces feelings of pleasure. Believe it or not, there are health benefits to seeing horror movies: Click here if you need more info. But there are dramas that do the same thing, leading me to say this: This horror film can compete with the best of dramas that curry so much attention. What is Director Craig Center up to? A new genre? Says he has other movies of a dark, dark nature in the works but he didn’t say they were horror. Uh oh!

Psychologists also explain why so many seeing 6:45 are likely to experience a condition that they must see it again and again.  Psychologists have found that repetition breeds affection. Familiar fare requires less mental energy to process, and when something is easy to think about, we tend to consider it good  – Derek Thompson, The Atlantic.

I was the American star on the Sporting Club De Portugal basketball team a long time ago, and suffered a severe knee injury in an away game in Sangalhos. And, so, as I was convalescing and rehabilitating in Lisbon, my girlfriend and friends took me to see JESUS CHRIST SUPERSTAR at one of Lisbon’s marquis theaters to get my mind off what was looking like a career-ending injury. The film blew us away and we headed to a local cafè to share experiences about favorite scenes and lyrics and more.

In the course of the conversations, it became clear that there were a lot of scenes and stuff we couldn’t agree on, that the personal cinematic experiences were that unique.

So, we returned a few days later to see it again and afterwards headed to the same cafè to rehash. And it happened again, that everyone seemed to have been caught up in something that the rest of us didn’t see or experience. So, it was back to the marquis theater. And as days and weeks came and went, other visiting friends and American players from other Portuguese teams joined us.

And so it would be seven to 10 or 15 of us going to see the movie again and again and again. Sometime around the fifth or sixth week, bingo, we all saw and experience everything what everyone else did. It was a cosmic experience.

This explains the existential thumping I was experiencing every time I saw 6:45, that I am going to have to see it again until that feeling is satisfied, that I saw and experienced everything that it had to offer.

← Previous Post
A Damn the Delta Variant, Full Speed Ahead Q & A: With 6:45 Director Craig Singer →