In these times of “fake news,” slimy, lying journalists, the severe mistrust of news media by the American public, according to a recent Columbia Journalism Review article, and the reports of increasing threats of violence against reporters, there are journalism students undeterred about their career plans  – even if the job market for journalists isn’t rosy. 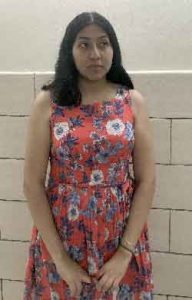 One of the undeterred is Laura Chavarry, 22, of Queens, a theater major who said that journalism allows her to combine her love of writing and the possibility of a good career for her future. As a child, Chavarry wrote short stories, and her mother suggested that she become a journalist. Mom believed it could help with potential future job opportunities, she said. Journalism allows her to not only write and fulfill her mom’s wishes, but also allows her to be thoughtful with the writing she produces which blends creative writing with the facts that readers need in their news, she said.

Chavarry was dressed in an classy white top, black and white polka dot calf-length skirt, ballet flats and diamond necklace. After the interview by the vending machines at the Hunter North entrance to the Skybridge ended, she set off to her job at Macy’s in midtown Manhattan.

Another of the undeterred is Bryan Moreno, 22, who said he has a passion for sports reporting, especially boxing and wrestling. A transfer from John Jay College of Criminal Justice, he is now an English major with a journalism concentration. Dressed in a black windbreaker, navy blue button down shirt, dark wash blue jeans and navy and white sneakers, he was interviewed on the third-floor Skybridge of the West Building.

Moreno grew up in Puebla, Mexico. When he was in grammar school he was bullied, teased, and hit by some classmates, he said. His parents, concerned and troubled by the well-being of their son, enrolled him in self-defense classes. In those classes, Moreno found his fascination for boxing. He said he has watched all the matches that he could and idolized his favorites, like Juan Manuel Marquez, a former Mexican professional boxer who competed from 1993 to 2014.

At 15, Moreno said he and his parents moved to the Lower East Side of New York City where he lives now. He spends his time in gyms and at wrestling shows, getting up-close-and-personal with athletes and people involved in the sport. Boxing motivates him to write and report on the boxing community. His passion for boxing inspired him to report news stories of matches he attends and those with whom he interacts. “The technique, the diversity, the atmosphere, anyone can do it,” Moreno said.

Cassandra Lynn can be reached at clcatapano@gmail.com