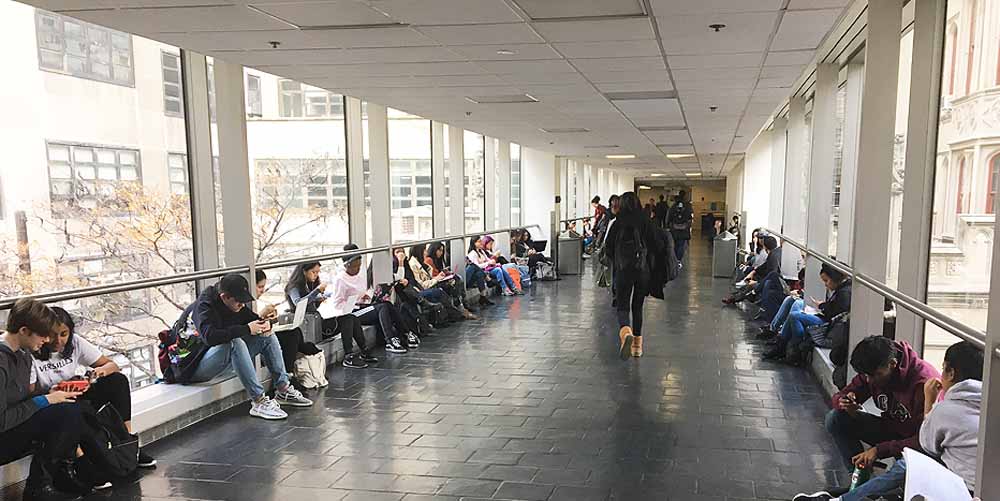 Majoring in ancient Greek and Latin and minoring in media studies with a concentration in journalism, Henry Fernberger, like many students, says he isn’t sure what he’s going to do once he graduates. But he knows he has returned to Hunter for the last time.

“I’m trying to figure out what I like, since it’s a significant part of my identity,” he says. He describes himself as an activist who took an interest in student politics and recalls his high school days when he raced dinghy boats.

At one moment in the interview he pauses and looks out the third floor Skybridge. He seems to be gazing over the scene below: One-way traffic running south on Lexington Avenue and one-way traffic running west on 68th Street as students exit the 68th Street Lexington Avenue subway stop and many mill about the West Building entrance. In the background are tall buildings. In the evenings the lights and taillights of cars add an impressive hue to the scene. 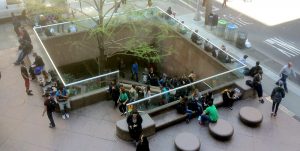 Activism came to him as a natural response to his experiences with the college, he says. “I was bitter at how the system impeded access to education for all.” Fernberger recalls, for example, a conversation he had with a classmate who struggled to pay tuition. Ferbernger says he felt upset that students weren’t able to get a degree at what he considered an affordable price. He says it is unfair that there are students who can go to college without worrying about finances or having a job while others have to overcome numerous obstacles to earn their degrees.

This, he says, prompted him to attend several meetings of the CUNY Board of Trustees and CUNY-related events, and even participate in student government elections as a way to get involved and promote change.

But when you’re one voice in a sea of thousands, he says, it can be difficult to imagine any progress. He stopped his activism for a period of time because of his studies and work.

Fernberger recalls boat racing as a very time-consuming sport. He began sailing when he was 13, at first for fun and then for serious competition. He maintained that activity through high school until he was 20 when he quit. “My boating partner was a very irritable person, and I kind of grew to resent him over time due to his attitude,” he says. “I would have to practice with him for hours in order to prepare for races, and since I had a busy schedule, it got overwhelming.”

He has picked up new hobbies, such as rock climbing. He was introduced to the sport two years ago, and has climbed outdoors and in gyms. Fernberger has even assembled a small unofficial team that represents Hunter in rock climbing competitions in the city. He also says he has taken up an interest in anime about a year ago. “The thing about anime is that you have the ability to make all these scenarios happen that you wouldn’t be able to do in real life,” he says. “The possibilities are almost endless when it comes to storytelling.”

His family has been very supportive. “I still live with my parents, and sometimes I ask them what they think,” he says. “They haven’t pressured me in any way and that’s great.”

On the other hand, Cassandra Catapano, 24, says she has her post-graduation plans sorted out. The senior majoring in media studies with a concentration in journalism wants a job in logistics for a small company. Despite being good at writing fact-based pieces, and having an interest in her major, she says she doesn’t want a career in media studies. Catapano says that she is not good writing creatively, but her real skills come into play when she writes about actual events. “I think journalism is important,” she says. “People deserve to know what’s going on in the world and how it impacts their daily lives.”

She works as a sales person at Midtown Comics. “I enjoy working there,” she says, “it’s been fascinating to see how many people have gotten interested in comics due to the rise of visual comic media, like the Marvel Cinematic Universe, for example.” While many of her regular customers come in for the comics, others want to see the rare merchandise and collectibles that are on display. Plenty of tourists also stop by since the location has become popular in recent years.

Attending New York Comic Con provides her a precious perk, and Catapano has gone five times. Tickets sell out fast, but her job guarantees her access. She must interact with customers and that leads to a fair share of humorus moments. She recalls when she had to dress up as Harley Quinn and pose for pictures with people. “One guy came up to me and asked to lift me up,” she says. “I tell him sure, and he lifts me upside down for the picture. Once it was over, my boyfriend looked at me all confused, probably wondering what that was all about.”

This year, at the time she was interviewed, she was looking forward to new details about the BIRDS OF PREY and THE JOKER. She knows her job is temporary but intends to enjoy every moment, she says,