Despite news reports of more than 500,000 dead and blazing headline threats of escalating virus mutations descending on us like a biblical plague at the time I was wrapping up my final draft for this article, this semester at Hunter been more relaxed and laid back for me and students I know, especially seniors who want to graduate this June.

That kind of tranquility exists because we know what to expect this semester, because it’s all familiar, it’s all about the ZOOM. 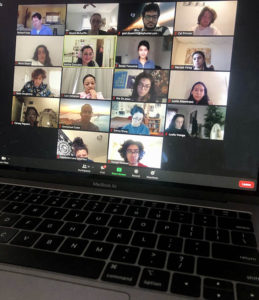 Picture by Niamh McAuliffe at her family’s home.

Students get a Zoom link, they un-mute themselves when they want to talk, and say thank you, and wave goodbye to their instructor when class ends. Zoom is no longer this nerve wracking experience when students worry about issues they never had to even consider, such as, and this is just one, that their peers can hear them even if their microphones are muted.

Maybe some still worry, however.

Although I interviewed students who said they enjoyed being online because they don’t have to commute — I even know one professor who said she might quit when the campus returns to in-person learning — many whom I know and didn’t interview for this article still miss being on campus.

I was abruptly kicked out of Hunter’s 79th Street dorms near First Avenue. In an email notice to students, it was stated that the Governor’s NY on Pause order  made it “imperative that students go home and stay inside for their own health and safety, as well as that of everybody.”

I am now at home in Hicksville, Long Island, with my parents. Forcibly expelled from life in the city to remote classes at home has been difficult, and I cannot wait to return to campus. I am not alone. Computer science major Wilfredo Recinos, 20, of Manhattan, said, “It’s actually made me a bit more shy because talking through screens is kind of weird versus talking to someone in person. Anybody could have gone to an online college and just taken the classes, but we chose to go to a public school where you can meet with other people and connect with them.”

Or so we thought.

Donna Megna, a 21-year-old general psychology major who lives in Queens, also said that it was hard for her, especially since this is her last semester. The senior said in a phone interview, “Being at home all day definitely does take a toll on you. Sometimes here and there I need to zone out and talk to my friends and go out for a little breather.”

I know this is important to do because of the isolation from the collective experience of being with other students. There are news reports about a decline in students’ mental health. According to Ryan Craig, a senior contributor at Forbes, “Zoom school may set us back more socio-emotionally than it does academically.”

My mental health suffered because of remote learning. I hated online classes last semester, and I told friends and family members that it had not do with difficulty learning, it was about surviving. Getting through the semester without failing my classes nor having a mental breakdown was all I was aiming for. Then, over winter break, when I was at my worst, I had a very deep conversation with my hairdresser when I was getting my cut. We talked about many things, like how getting dressed, going for walks, and talking with my friends could improve my life. 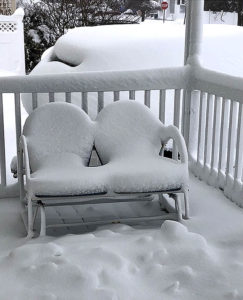 I tried them all and to my surprise I am in a better mental state, and I am more optimistic about this semester and the future. I want to make that transition back to in-person classes next fall with as much elan as possible.

I appreciate snow for how beautiful it can look when it’s falling and how suddenly the world feels quiet, but since the first snow back in the beginning of February, it has become less exciting to me and more dark and depressing. According to the New York Times, “New York City was smothered by 17.2 inches of snow by early Tuesday, more than in all of last winter, when only 4.8 inches fell on the city.”

Kristina Vukaj, 22, a junior majoring in media studies with a focus in journalism like myself, said she disliked the snow even though she lives Five Towns, Long Island, which has a lot more snow to shovel than Manhattan. She missed her first two classes because the snow knocked out her Internet, she said.

Recinos and Megna said they liked the snow and saw it as a comforting start to the semester, especially because they don’t have to commute to campus. Now, as I am writing this draft, the snow has transformed from the pristine fluffy white to the brown slush found in dirty mountains. This may be a metaphor for the way the semester will go. But I hope I will be able to hold onto this laid back feeling and optimistic viewpoint all semester and soon return to campus.

Niamh McAuliffe can be reached at nmcauliffe@outlook.com

← Damn the Pandemic, Full Speed Ahead
David Dekle-Hills, Kedar Young and Sumaya Nasir Said They Are Stepping Up to Challenges As Best They Can
This Threat Could Have Scared the Bejesus Out of Me Except for … →