Emerging media major David Dekle-Hills, who lives in Howard Beach, Queens, said he experienced a period when he lost passion for his favorite endeavors. For example, instead of practicing piano, he watched anime or played video games. 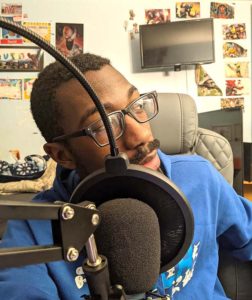 The 22 year old said that a few months ago the passion returned, and he started his “The Voice of Thunder” podcast to share personal stories and talk about things that interest him, such as poetry and other forms of literature. Although it was originally a monthly podcast, in January he pushed himself to release weekly episodes, he said in a Zoom interview.

The return of the passion erased self-doubts he had about himself, said the senior, who wants to expand his work ethic to practicing piano more often and learn Japanese.

Film major Kedar Young, 22, who lives in Yonkers, said he found ways to be productive during the pandemic. Although he cannot swim nor engage in archery, he said he was refining his writing and photography skills to prepare for a career in filmmaking, voice acting and screenwriting.

Yet, during a Zoom interview, Young also revealed that the pandemic has been menacing at times. He recalled that three of his family members were sick with COVID and that all had lingering symptoms after their recovery. Aside from focusing on his studies and working as a cashier at a store in Yonkers since the pandemic began, he said he had to focus on self-isolating. 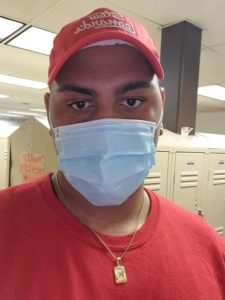 He wore masks and gloves inside the house, stayed in his room most of the time and was responsible for all the household chores. “Working in school is already hard enough,” the junior said. “But working and going to school during a global pandemic is just a completely different ballgame.”

Anticipating a return to normalcy even though he isn’t sure what form that would take, he said that everyone should still aspire to achieve their goals. “I think hope is the biggest thing we have right now,” he said. “Do not necessarily hope that things go back to normal but hope that things move forward.”

Senior Sumaya Nasir, 22, a political science major with an interest in pre-law, said that she recently moved into an apartment and must pay for rent in addition to school expenses. Nasir said in a Zoom interview that since the pandemic savaged the job market that it is now harder for her to find work that will help her pay bills.

Despite her challenges, said Nasir who lives in Bushwick, Brooklyn, she was grateful that her scholarship manager helps her find ways to get money and that her friends are understanding and encouraging.“If it wasn’t for her and my friends, I think I would have been distraught,” Nasir said.

Seon Pollard also can be reached at Seon.Pollard948@myhunter.cuny.edu and seonpollard@gmail.com. His major portfolio website: https://seonpollard.wordpress.com