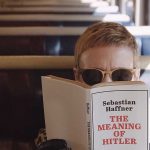 THE MEANING OF HITLER’s bravura cinematography and deft use of visuals – such as animation, graphics, vintage news reels, Hollywood and foreign movie footage, social media visuals – as well as interviews with historians and writers speaking with a believe-it-or-not-if-you-dare tempo about a truth, a whole truth and nothing but that truth – resulted in a sweeping panoramic documentary with prophetic and apocalyptic tones about the Who, What, Where, When, Why & How of the never-ending macabre fascination with Hitler.
By Gregg W. Morris