BLAME’s writer seems to purposely add a twist to a predictable plot in order to stave accusations about the obvious clichés. The sudden re-directions make for an unexpected ride down a familiar lane. But a jolting cinematic ride is what we should expect from a 22-year-old writer/director, right?

Bravo to the talented Quinn Shephard, who wrote, directed and starred in her debut at the Tribeca Film Festival. 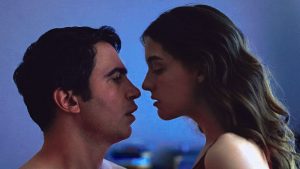 Shephard elicits conflicting feelings from the teacher-student dynamic. It’s not absurdly poetic, somehow justifying an inappropriate love affair between a young student and her teacher (like many films do.) Instead it deglamorizes the school girl crush and subtly accentuates the twisted nature of such relationships – but not without alluding to an element of insanity from the love-struck teenager. If the uncomfortable feeling one gets from the derailed love affair is purposely solicited in order to parallel the shocking ending, then Shephard is a genius with a bright future.

On the notion of insanity – Shephard’s compounded plot adds depth to the storyline. The superficial and underlying injection of Arthur Miller’s, The Crucible, adds duality to the plot but also helps in developing the characters. If you’re familiar with the play, it’s easy to make your own connections between the two Abigails.

Shephard (Abigail) says very little throughout the film, but wardrobe, facial expressions and the looming play about witches helps to emphasize the mystification of the character. The juxtaposition of a play based on 17th Century witch hunts and today’s selfie era is another one of those contrasting jerks throughout the film.

Dual plot theories aren’t the only multi-faceted proponents of the film. “There are a few reasons why it was important to me to make this film as a dual protaganist story,” says Shephard. You’ll see how one mean girl fits that role.

Chris Messina (Jeremy) does a great job at walking the sexually perverse tight-rope. Hmmm, but does he? One scene in the film would have you wonder.

Nadia Alexander (Melissa) wonderfully plays the defiant role of a mean girl. The familiar scenes of her tight-lipped and stomping through the high school hallways, flanked by lockers, seems like an exaggerated homage to every mean girls movie – it made me laugh.

Overall, Blame is an interesting twist to a mean girls theme that somehow seamlessly incorporates poetic justice and an all too familiar taboo. Shephard will most likely be a force to be reckoned with in the industry.

Kadia Goba can be reached at Kadia Goba Kadia.Goba09@myhunter.cuny.edu