The family is the most violent institution, group or setting that a typical citizen is likely to encounter. There are, of course, exceptions, such as the police or the army in time of war – Dr. Murray A. Strauss, University of New Hampshire, Sociology.

TAILGATE was an official 2020 selection at the Sitges Film Festival and FrightFest: A Dutch family embarks on a highway trip to visit paternal grandparents. Their car becomes stuck behind a slow-moving van along the way, and the family patriarch at the wheel menacingly tailgates the vehicle by blaring the horn and riding the van’s bumper with inches to spare.

In subsequent encounters and faceoffs along the way, the swaggering, bellicose patriarch, as his two young daughters and flummoxed wife watch, shoves the van driver to provoke a fistfight. The van driver being provoked is a sociopathic killer who on occasion doffs a yellow hazmat suit so that he can safely spray a fatal toxic, flesh burning concoction on victims who fail to apologize appropriately for insulting him. This killer toys with victims like a cat playing around with the mouse it plans to eat.

At this point in the movie, the cerebral and visceral cinematic signposts have piled up to the point that the reviewer realizes that TAILGATE is more than a road or a road rage. It is so much more. 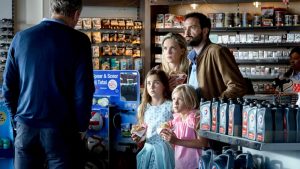 The family that sneers together stays together? Picture, courtesy Movie Moment

It is not the rock’em, sock’ em’ visceral thriller that the movie trailer portends. [The trailer’s popping but pithy soundtrack bite made me want to rise from my seat to boogie and sway with the music.] Instead, the movie bristles like a plot ripped from pages of The Theater of the Absurd, suffused with irony, parody and slapstick whackery as well as a medley of other features of the absurd.

Thus, this reviewer came to believe that the subliminal messaging resonating throughout TAILGATE was apparent in the opening scenes with hints of the ails, ills and woes of Holland’s bourgeois society told through a prism of a Dutch family looking chic and privileged on the surface – while the rot underneath nibbles away at their lives. 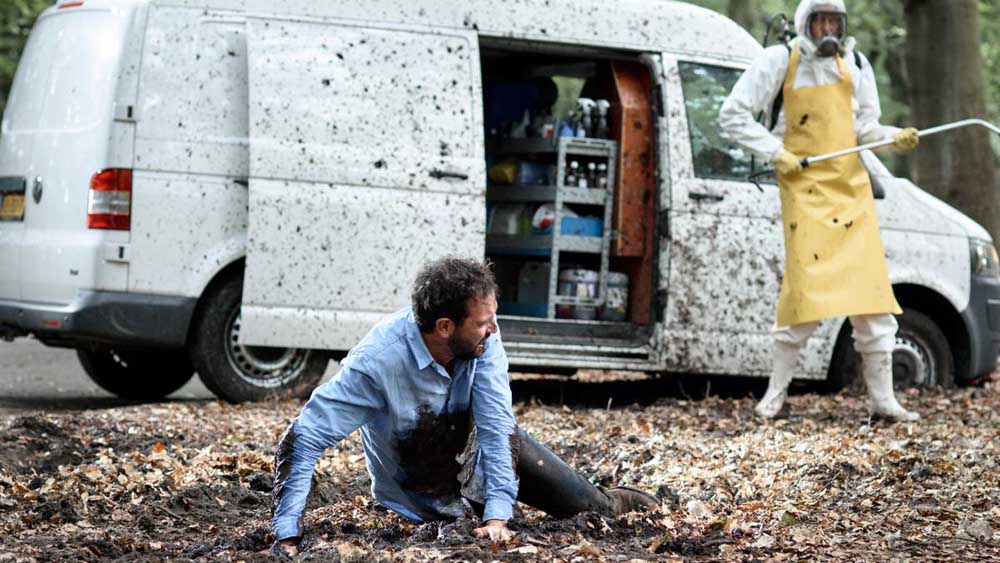 Comeuppance in the works? Picture, courtesy of Movie Moment

All the seeds (sassy & savvy directing, acting, cinematography, production values) look promising for a 2022 or even a 2023 remake, re-thought, revising or just a straight up Part 2. A TV TAILGATE series via Netflix? After all, recall how the Dutch Prime Minister gracefully put down America’s beloved-by-millions racist, sexist homophobic misanthropic POTUS in a 2018 meeting. I can hardly wait.

Lodewijk Crijns wrote the screenplay for Tailgate. Steve Willaert created the music for the film. Bert Pot crafted the cinematography for the film.

About Film Movement – A North American distributor of award-winning independent and foreign films founded in 2002 and based in New York City. It has released more than 250 feature films and shorts culled from prestigious film festivals worldwide including the Oscar-nominated films Theeb (2016) and Corpus Christi (2020).