One reason for the bravado moviemaking, this reviewer believes, besides its virtuoso directing, cinematography, acting, and sundry other cinematic flourishes, is the imaginative kaleidoscopic-style segueing of flashbacks, surrealistic dreamlike scenarios and iconic scenes of contemporary heartland America circa 2013 that create a verisimilitude of astonishing transcendental proportions that you only experience with the best of the best movies.

Caveat Emptor WORD readers: JOE BELL is one of those movies that many will come to believe has to be seen more than once because there is so much to this story and the way the filmmakers chose to tell it, especially if you feel your buttons are being pushed this way and that for 90 minutes. Audiences should also anticipate that their minds, bodies and souls may be stretched across levels of awareness and consciousness that they hadn’t expected, maybe didn’t even know existed – and you know what that means.

The film opens with Joe Bell, working class white, from the Oregonian town of La Grande, already into a walkabout across heartland America from his hometown to the Big Apple, in tribute to his teenage son Jadin, who was driven to suicide by pernicious and wrenching torture-bullying at his high school. [Note: This reviewers believes the contrast between bullying and torture-bullying needs to be clarified because the latter can result in grievous savaging of mind, body and soul when it doesn’t end in death.]

The torture-bullies are your typical homegrown, homophobic youths and the like, in a community where the pecking order can be intolerantly vicious for those socially, culturally and racially marginalized to the fringes. Joe, pushing along a two-wheelie carriage, is heartland trekking from Oregon to New York City (not across country according to teeming misinformation in lots of reviews) because that’s where his son was planning to go after he graduated from high school. 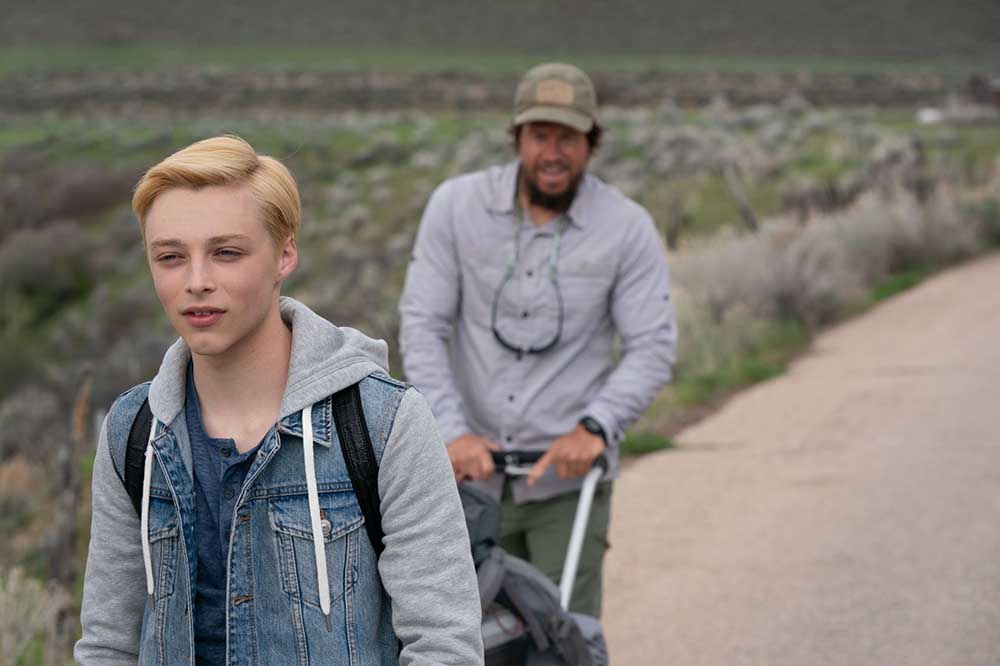 Joe’s Jadin was tortured-bullied because he dared to come out when he was a member of the La Grande High School cheerleading team. Jadin is as stoically intrepid as his dad is braggadocio cantankerous but no match for the mob stalking him and the community that nurtures them. News and social media stories reporting on Bell’s walkabout embellish an image of an everyman-dad with true American grit, bestowing on him, in a sense, a news spotlight talisman giving him an extra measure of respect.

Nevertheless, early movie-scene-segues of Wahlberg’s Joe Bell, before his son’s tragedy, portray him as a cantankerous, brash, macho my-way-or-the-highway sombitch. Family and friends who believe that a heart of decency beats deep in the marrow of Joe’s soul tolerate him in those enigmatic and persnickety ways of family dynamics that outsiders may not fathom. Regardless, there are scenes of Joe that push this reviewer’s buttons. In the movie that braggadocio was never used in the best interests of Jadin when he was alive and under attack.

And the reasons and motives for that are deftly told in the 93 minutes of the film.

So, Joe’s walkabout is also his means of trying to assuage the guilt that he stumbled and fumbled coming to terms with his son’s sexuality and cruel predicament, that he wasn’t there for Jadin as much as he could have been. Joe’s message early on to any heartland denizen whose path he crosses is that more tolerance of people not like you is needed. Jadin, played by Reid Miller, appearing in surrealistic dream scenes of him and his dad conversing, sometimes even crooning in duets of Lady Gaga lyrics, chastises him for a feeble pitch about intolerance, that it’s too superficial and even too self-serving. 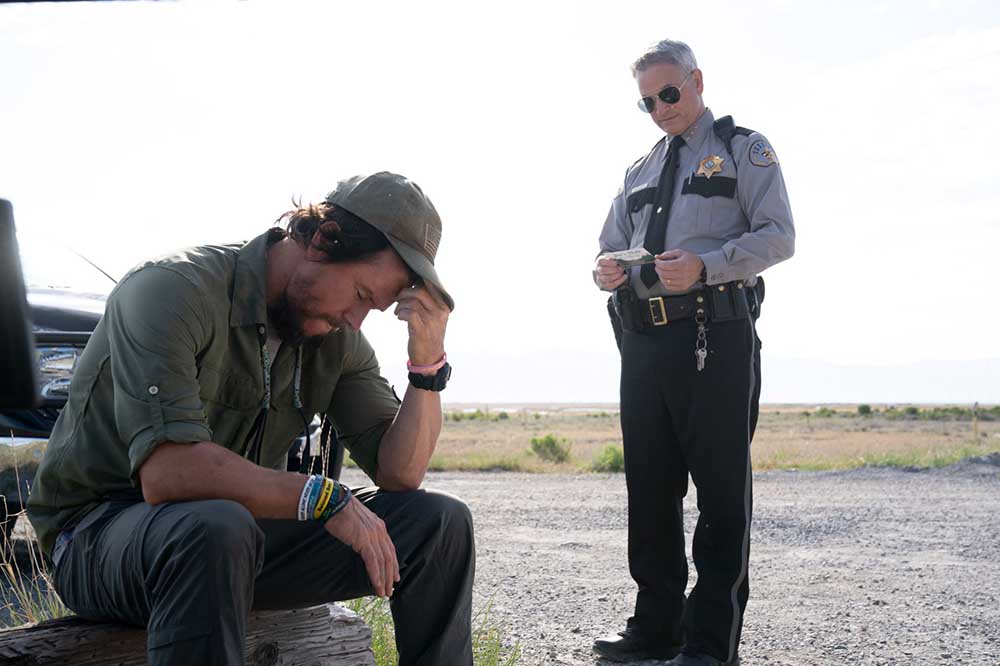 Joe’s self-realization of his faults, though, emerge over a painful and anguishing period of self-discovery as he encounters strangers on his walkabout in town and city soapboxes, watering holes, diners and school gymnasiums that welcome him – and inadvertent encounters akin to ships passing in the night.

This writer believes WORD audiences should be provided a succinct, contextual prep to understand this reviewer’s use of certain expressions and characterizations, such as “torture bullying.” My real-deal, straight-up, no chaser definition for bullying that leads to grievous harm or death: Torture. This real deal definition is based on empirical and scientific research and personal experiences.

So, I wrap up the film review with a reflection on a compelling scene that for this reviewer is one of so many that resonated with incredible push-button verisimilitude. Joe, played by Mark Wahlberg, his wife Lola played by Connie Burton, and their son Jadin, played by Reid Miller, are in a meeting with a high school counselor bureaucrat about a wrenching torture-bullying attack on Jadin. In the meeting, Jason stands his ground, saying, in so many words, that the school should haul thugs in and ream them, submit them to a tongue-lashing and punishment for what they did. The school counselor lectures, patronizingly, the family about options, such as Jadin considering transferring to another school district or getting a therapist for his gayness, inferring that if Jadin wasn’t so openly expressing his gayness, he could find some measure of harmony in the school and his community. 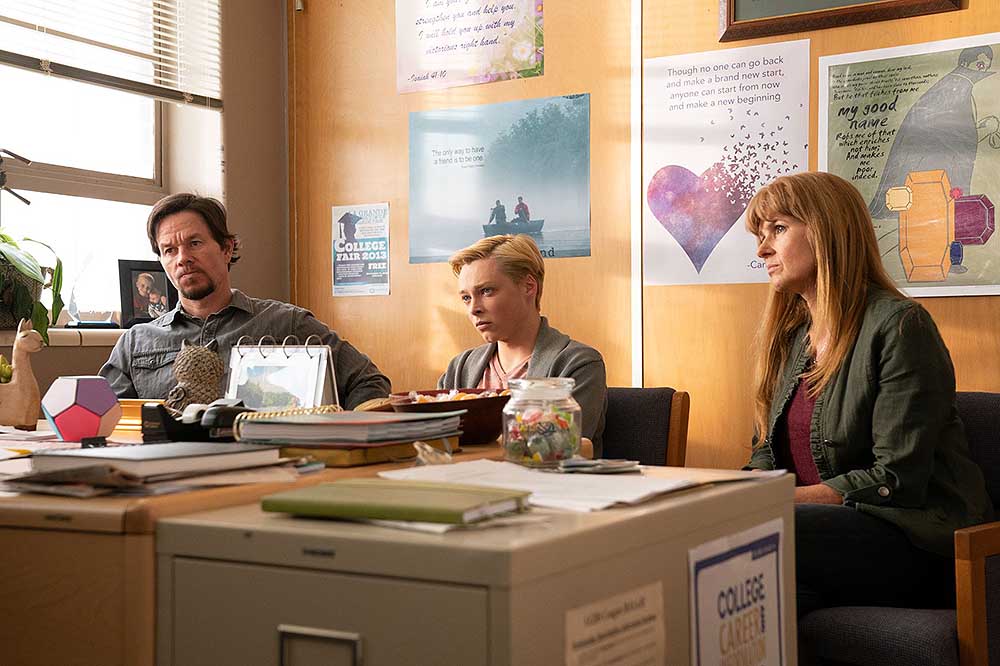 Mom and Dad, uncomfortably listen to the intolerant school bureaucrat. They say nary a word to the counselor dissing their son. The counselor was so-ooo-ooo good at her role as a typically patronizing and insensitive bureaucratic neandertha. I’ve yet to identify the actress.  I was swelling with molten malice – figuratively speaking, of course 👹. I so wanted to reach into the scene on the screen and rip her heart out, squishing it into a lifeless pulp of oblivion – figuratively speaking, of course 👹. There are numerous other button-pushing scenes.

I believe there should be more TV and movie and videogame productions about bigots and racists getting their comeuppance in viscerally appealing cinematic ways. JOE BELL is not one of these movies but is powerful nevertheless.