Students randomly interviewed for this article about their favorite TV shows said they were too busy to watch the home screen for regularly scheduled TV shows, but some did say that they watch Netflix when they could.

The 2017 fall semester was coming to a close as this article was being completed and some students interviewed talked about their Netflix experience. Sarah Beaglehole, 21, a psychology major, said she was recently catching up on the series Dexter on Netflix in her spare time. The celebrated cable series, a Showtime monster of a hit running from October 2006 to September 2013 before eventually being picked up by Netflix, is about a serial killer who kills serial killers. It was recommended to Beaglehole by a friend. “I like that it is different than any kind of show I’ve seen before,” she said. 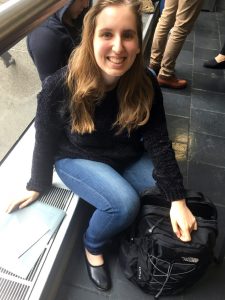 Beaglehole is a psychology student who enjoys the psychological aspects of the show, which include the motives for homicidal and murderous action by the main character, Dexter, played by Michael C. Hall. This is one of the few shows she watches. In the series, Dexter Morgan is a Miami-based blood spatter expert. Beaglehole said she has also has used Netflix to watch “Beauty and the Beast,” about a daddy’s girl who ventures out on her own and falls in love with a rich but ugly beast who has imprisoned her.

Beaglehole said she loves the special effects. “The only reason I only watch Netflix is because the only time I have to watch anything is weekends and in between classes,” she said. “Most of the time I’m studying or volunteering at the animal shelter. I’m in school five times a week, volunteer one time and Sundays are my family lazy days.” She was interviewed near the escalator son the third-floor of the West Building where she wore a black sweater, black flats, jeans and a black backpack.

Jacob Levintess, 19, a history major, said he primarily watches Netflix to get his TV fix. “I’m watching The Office and the movie The Big Short,” he said. The Office is a humorous depiction of what happens every day in a supposedly typical business office. It still has an enormous fan base. “The Big Short is about how businessmen used the economy to make money,” he said. “The Office may be for humor, but The Big Short is more on the serious side.” 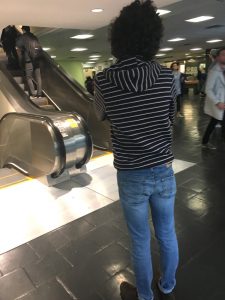 Jackob Levintess prefers his back to the camera. Photo by Jane Verdel

Said Levintess, “I don’t have time for television. I work at a warehouse once a week and the rest of the time I’m doing schoolwork for four classes in addition to being president of the International Club at Hunter.” He was interviewed on the third floor of the West Building by the library and wore brown shoes, jeans, striped sweater and a blue backpack. Mariya Lyampart, 22, an accounting major, said she watches several shows. One is Modern Family that he said offers a funny perspective about family life; The Middle, about a family of five and their shenanigans; and Lucifer, AKA the original fallen angel, AKA Satan, who has become dissatisfied with his life in hell, according to publicity. After abandoning his throne and retiring to Los Angeles, Lucifer indulges in his favorite passions: Wine, women and song.

“If I miss an episode, I watch it online right away. I don’t work right now, so I have a lot of time to watch television, even with schoolwork to do,” she said. She focuses solely on her studies. She wore a black jacket with jeans and black shoes at the interview in the library on the third floor of the East Building.

Raffaella Eydelman, 22, enrolled in the undergraduate nursing program, said, “I watch Grey’s Anatomy and Law and Order.” She also said, “I watch Law and Order because it is interesting and the story lines allow me to relax.” She also said, “The first half of the show concentrates on the investigation of the crime by the police, the second half follows the prosecution of the crime in court. On the other side, I’m watching Grey’s Anatomy because it is helping me understand things that I am learning in my nursing program.”

Grey’s Anatomy is a medical drama about happenings in a hospital, which Eydelman said she can relate to. Eydelman watches this for pleasure. “Sometimes, because of my workload, I can’t watch it on the day the new episode comes on, so I record it,” she said. She wore a red shirt, a back pack, jeans, and a hat, and was interviewed on the third floor East Building.