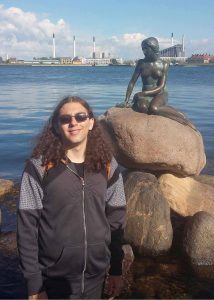 Three students were interviewed about their first few weeks of the fall semester, a period that can be enjoyable or frustrating depending on how well students get the course schedules that they want. The early weeks were good for Matthew Dreyer, a 21-year-old senior. Dreyer said he was enrolled in only one class on this campus because he takes the rest of his classes at the College of Staten Island where he is a history major.

“The first few weeks have been good, I noticed a lot of broken escalators,” said Dreyer, who wore black jeans and a blue shirt and was interviewed in the seventh floor Hunter North lounge. “I really enjoy German and that is my only class, so I have no regrets,” he said. Why German? “I like it because it’s cool to learn another language,” he said.

On his commute to Hunter, he listens to music or plays games on his phone. Dreyer, who rarely eats on campus, usually brings a sandwich. “Sometimes I’ll get Halal, which is rare,” he said.

Regarding hobbies, he enjoys movies, TV, video games, reading, hiking and eating. “The movies I like range from enjoyable horror, comedies, deep philosophical movies or just fantasy,” he said. “For TV and books, I keep to more to the fantasy side because I like character development. Character are my favorite part of a story.” He likes hiking because he gets to connect with nature and he likes food because he craves comfort. Dreyer works as a tutor in CSI. “It’s fair, it’s relaxed about being a little and you can do homework or chill if nobody is there to be tutored,” he said. “Sometimes the job is boring,” he said.

Raphael Kashtelian, a 21-year-old media studies major with a minor in math, said his “first few weeks back were generally okay. I like my classes for the most part except one elective that seems too repetitive. I’d say it’s worse than last semester based on the fact that the schedule is bad. I have classes ending at 9:40 p.m. and (beginning) next morning at 9:45 a.m., with a two hour commute each way, which can get exhausting.” Said Kashtelian, “The production classes are very fast paced and if you look away for five seconds, you struggle to catch up the entire class.” He wore a tan T-shirt and jeans and was interviewed on the third floor skybridge.

Kashtelian lives in Staten Island and doesn’t have a job at the moment but he said he was looking for internships in design and production so that he can do light coding, which he wants to apply to websites and video games later in his career. One of his main hobbies is playing video games. “I play racing games usually, like Forza Motorsport, but I also love open word games like GTA,” he said. Asked why those are his favorite, he said, “I enjoy racing games because I love cars and the physics of racing are satisfying and open world is good for letting out the stress.”

He said that he gets stressed from life in general because of his nihilistic outlook on the world, his studies and uncertainty about the future. “I just commonly find that I have no idea what to do with life at times. I either regret taking the wrong track, or just don’t know what to do next,” he said.

Sometimes the escalators work, sometimes they don’t. Elevator service in the North Building can be a bummer.

Gabriel Dudin, a 20-year-old junior and a media studies major who lives in Brooklyn, said, “My first few weeks back in school have for the most part crawled by at their usual lukewarm pace, and nothing of note has really occurred. I don’t have any particularly strong feelings as to how I feel about this semester, since it still feels too early to tell, and as it compares to my previous semesters. I’m more confident in my selection of classes, and don’t have any immediate regrets or classes I’m fearful of.” 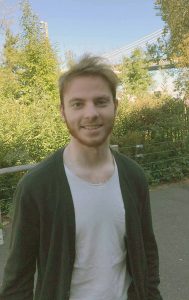 Wearing shorts and a T-shirt and interviewed in the third floor student cafeteria, he said, “I’ve had a pretty good idea of what major to go for since the start of high school since they also offered majors, and I was confident in my choices of classes because they fell more in line with my major rather than Hunter’s core requirements.”

“I like video games, a pretty wide range, anything from shooters to RPGs to puzzles. If I’m not doing that, I’m reading, texting friends or just making for myself in Photoshop or something,” he said. Dudin doesn’t have a job but elaborating on the Photoshop, said, “I like to do typically just small graphic design things, banners, logos. I sometimes have friends ask me to do things for them, so I do that too.” The work gives him an “opportunity for self improvement or experimentation, but it is a job when they pay you,” he said. As for his love of video games, he said, “I guess I like the way they make you think, with some games promoting great quick thinking and others really making you think far in advance with preparations and the like. For some games, I enjoy the worlds that the creators build for you to move through and the characters and stories they mold for you to fall in love with.”

Larry Romanovich can be reached at Vrom68@yahoo.com

← New America Media, AKA NAM, Shutting Down Officially November 30, 2017 – It Will Be Missed
MOST BEAUTIFUL ISLAND – Part 1, Film Review →