Awesome Is What Awesome Does

The iHeartRadio Jingle Ball tour is one of the biggest of the year. Shows take place around the country, hosted by various radio stations and about 10 select artists attend each one and perform a few songs.

This year, Niall Horan, a member of the boy band One Direction, was performing at a few Jingle Ball shows. That is, he was performing for the first time as a solo artist, so naturally, as a big fan, I had to attend all the East Coast shows where he was performing – New York, Boston and Washington D.C.

My Jingle Ball experience, I imagine, was in sharp relief to those of mere ticket holding fans – and I don’t mean that in an arrogant way.

It all started on a Thursday night when I went to the airport to try to meet Niall when he was landing. He was flying in from LA. The terminal at JFK was huge so the friend with me decided to wait upstairs and I waited downstairs to make sure we covered all of the exits. We stayed on the phone to keep each other updated.

The flight landed at 11:28 and around 11:45 my friend exclaimed, “His cars are here, come upstairs now!” Since we’ve been doing this a lot, we know what type of cars he takes and their license plates, so the second she saw the cars she knew he was going to come up her way.

I raced up two escalators and as I was getting upstairs I saw Niall walking through the airport quickly with three bodyguards around him. “Niall,” I exclaimed. “There’s two fans here. Is there any way we could get some pictures?”

Zayn Is in New York.

“Sure,” he responded, slowing down and reaching his arm out to me to take a picture. I moved in and posed with him, and then my friend did the same.

“Thank you so much for stopping,” I said. “I’m going to three jingle ball shows for you, I’m so excited,” I told him.

“Wow thank you, it’s going to be a lot of fun,” he responded.

After that he got into one of the black escalades waiting for him and left.

The next day was Jingle Ball so my friend and I headed to the pre-show, a party before the concert with food and games and contests. We were two blocks away when I saw on Twitter that Zayn Malik, another ex-member of One Direction, was also in New York. Paparazzi had photographed him leaving his girlfriends apartments. “Zayn is in New York,” I told my friend. Quickly, she turned the car around and headed towards the apartment. 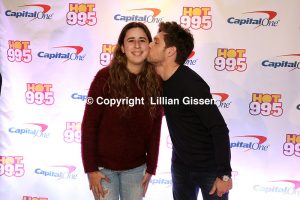 One paparazzi was there when we arrived. After about 10 minutes, Zayn’s car pulled up in front of the apartment and he ran inside. He didn’t see the fans waiting because he was covering his face from the paparazzi.

We waited about an hour when suddenly he walked out of the apartment and came right over to me. Normally, Zayn doesn’t stop for fans at his apartment, especially when there are paparazzi on the lookout there so I was very surprised. We took a picture but after he took mine he went right into the car and didn’t take one with my friend. Zayn knows who I am and usually always stops to take pictures with me because of that.

It feels amazing when he singles me out for pictures.

I hate meeting him when he is fleeing from paparazzi flashing lights in his face and dealing with fans fighting for his attention. My friend didn’t get a picture so we decided to follow his car and try to meet him again. He went to the Soho House in the meatpacking district to eat. When we got there, he ran in quickly andwe didn’t get a chance to talk to him.

After he finished eating he came out and right over to us. He gave me the biggest hug and I apologized for bothering him again, “I hate meeting you like that, with all the craziness and paparazzi,” I said. “No worries, you alright? It’s good to see you babe,” he replied.

He took pictures with us and then my friend wanted to get one of his lyrics tattooed on her so she asked him if he could write it for her. He was honored to do so.

“You have really nice handwriting,” I told him.

“Oh thanks, I thought you were being sarcastic,” he laughed.

He messed up the lyrics twice and kept having to redo it! “Stop distracting me!” he told me.

After he finished the tattoo I talked with him about his new book and then he got into his car and left. By this point Jingle Ball had already started. I didn’t have tickets for the New York show, it had sold out too quickly so I had planned on buying tickets from a scalper outside. 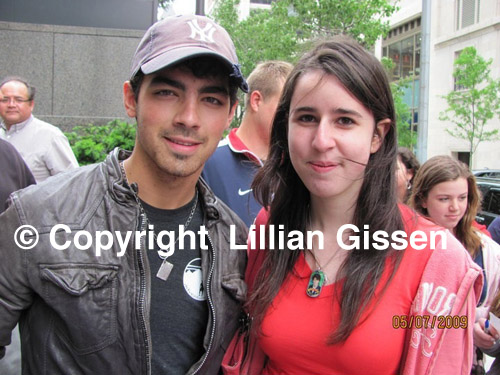 But because we had gone to meet Zayn I didn’t get the chance. I wasn’t very upset because I had tickets for the Boston and the D.C. show and it was the same artists at each show.The next day my friend and I headed to Boston. We drove about three hours, did some sightseeing when we got there, got dinner and then headed to the concert. We had had front row seats. We were so close we could pretty much see the sweat on Niall’s forehead.

Ariana Grande opened the show. Next came DNCE, then Daya, Diplo and Tov Lo. Next was Niall, he sang, “This Town.” Beautifully, of course.

After Niall finished performing we left and went to his hotel in Boston to try to meet him again. He came soon after us but pulled his car into the garage of the hotel so he didn’t have to see any fans. His car was still waiting there, so we thought he might come back out but we decided to go try to meet Ariana Grande instead since Niall had “garaged” it and it didn’t seem like he was in the mood to see any fans.

Ariana’s boyfriend was having a concert at a club in Boston so we headed over there to try to meet her. We waited there for about five minutes when suddenly Niall’s car pulled up in front of us! He came to the show to hangout with Ariana! What was our luck!? We asked Niall for a picture but he ran inside the club quickly, waving, but not stopping for any pictures. We decided to go inside the club to have another chance at meeting him, and snuck in the exit when somebody was coming out for a cigarette.

Inside the club we could see Niall, but couldn’t get close to him because he was in a closed off section for VIPs. We decided to just enjoy the concert and have fun.

After the concert ended it was very late so we headed back to NYC. We drove to D.C. in the morning for the next show so we wanted to get back and get a little sleep if possible. We arrived around 6 a.m., not sleeping all night. We rested for a little bit then headed out to D.C. around noon. On our way we heard on the radio free meet & greet wristbands were being given to fans to meet Niall backstage at the concert, and that the 100th caller would win.

I called from my phone and my friend’s phone, the line kept registering as busy when suddenly I heard it ringing on one of the phones: “Kiss 995, you’re the 100th caller!” My friend and I were screaming so much a lady on the phone could barely understand us. And we almost crashed! I answered a few questions – my age, my date of birth, full name and address – and got directions where to go and when.

“Can You Kiss My Cheek in the Picture?”

We ate dinner in D.C. and then headed to the venue to pick up our m&g wristbands – they were pink with the words, “Niall Horan,” written across the face, probably the most beautiful bracelet I’d ever owned. Then they told us to meet back at 7:05.

At 7:05 we were led downstairs into a big hallway. About 20 other winners were there. Soon they started feeding us one by one into a room. As I entered the room I saw Niall, I walked up to him and he hugged me.

“Thank you for everything,” I replied.

It was very quick but after that we took the picture. “Can you kiss my cheek in the picture?” I asked him.

“Of course I can,” he responded. He kissed my cheek and they took the picture and then I left the room.

We watched the concert and then headed back to NYC. We arrived at like 6 a.m., another night of no sleep. I was exhausted but over the moon. I had met Niall twice, Zayn once, saw the concert from the front row twice.

It was amazing, fun, crazy.

Lillian Gissen can be reached at lilliangissen@gmail.com