Four students interviewed on the Hunter campus said they weren’t concerned about tuition increases at City University of New York, but were troubled with the way things work at the University.

“Tuition is not a burden for me. But the financial aid office just isn’t organized,” said visitor Allen Cole Jr., a 23-year-old graphic design major at Kingsborough Community College who was interviewed on the steps of the Hunter North building. Wearing a red and black flannel, Nike’s, and khaki pant, he said this about Kingsborough, “They once put in the system fewer credits than I was taking that semester, messing up the financial aid award that covers my tuition.”

Said Mike Tejada, a 19-year-old history major, wearing basketball shorts, distressed Nike’s, and a sports book-bag while interviewed in front of Hunter’s main entrance, “Tuition doesn’t affect me unless there’s an issue with my financial aid, which has been the case this semester and the previous semester.”

Antonio Cerullo, a 20-year-old Macaulay College Honors student majoring in biology, wearing a button-down black shirt and gray chino pants, was interviewed on the steps at the Hunter North Building. “CUNY is cheap when compared to prices of other universities around the country,” he said. “Hunter specifically is a lot of bang for your buck. I know the quality of my education here is definitely top-notch, comparable to a lot of other brand name schools like NYU and Fordham. Tuition is a not a burden.”

Tuition, of course, is not a burden for Antonio Cerullo, since Macaulay College Honors students receive funds that cover four years of full-time undergraduate study. However, only 492 students at Hunter are enrolled in this program.

Katsia Amazan, a 22-year-old psychology major, wearing denim jeans and a knitted green shirt and interviewed in front of Hunter’s main lobby, said that regardless of tuition hikes CUNY is still a great university to recommend. “I’ve had really great professors that come from great schools, so I do recommend Hunter to my friends,” she said. 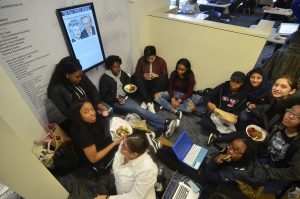 CUNY colleges, such as Hunter, have been nationally rated as “the best value for education” by Collegefactual.com. The average annual tuition for a full-time CUNY undergraduate is about $6,330 compared to the national public college tuition cost of about $8,240.

According to The National Center for Education Statistics, eighty-five percent of full-time college undergraduates receive some sort of financial aid help. About forty-four percent of CUNY undergraduates pay no tuition at all because of state and federal aid, such as Pell and TAP, provided to students.

Since 2011, tuition increases regularly because of a decision of The CUNY Board of Trustees for periodic tuition increases at CUNY senior colleges. The increases supposedly helps maintain the quality of education and student services. Tuition is raised $500 per year, reported The Excelsior—a Brooklyn College Student Publication. In an interview with The New York Times, CUNY Chancellor Matthew Goldstein said the university had little choice but to raise tuition in order to compensate for sharply reduced support from the state in recent years. Goldstein also said the increase is in place for “the protection of our faculty and staff from kinds of layoffs that other public higher education systems have experienced in recent years.”

No surprise that the Chancellor’s reasoning for tuition hikes has been criticized. Barbara Bowen, President of the Professional Staff Congress which represents faculty and some staff, told New York Times writer Richard Perez-Pena that the increase is “a failed budget strategy.”

PSC Vice President Steve London was quoted as saying, “Trying to fund CUNY through tuition increases is bad public policy. Expecting some of the nation’s poorest students to pay more and more will only reduce access to college and expand social inequality – the opposite of CUNY’s mission. And it will never provide the funds that CUNY needs.”

← Awesome Tour Memoir
What Does It Take To Become a Food Writer? →