BOOM BUST BOOM opened Theatrically March 11 in New York AT Village East Cinema and was release on iTunes and On Demand March 15. It’s one of those movies that this reviewer believes will been seen – and should be seen – more than once.

From Gregg Morris, WORD Editor: This Q&A took place March 10. I’ve edited comments to try to give a narrative style to the Q&A. Such as, I edited my questions/comments when I was meandering or elaborating too much. I sometimes get wrapped up in interviews and drone on. I marginally and sparingly edited the remarks of Co-Directors Bill Jones and Ben Timlett, basically eliminating pauses for a better read for readers. Also, because Monty Python’s Terry Jones appears in the film and narrates, I made references to BOOM BUST BOOM as another Monty Python movie which it isn’t though it’s obviously Monty Python-esque, that’s for sure. 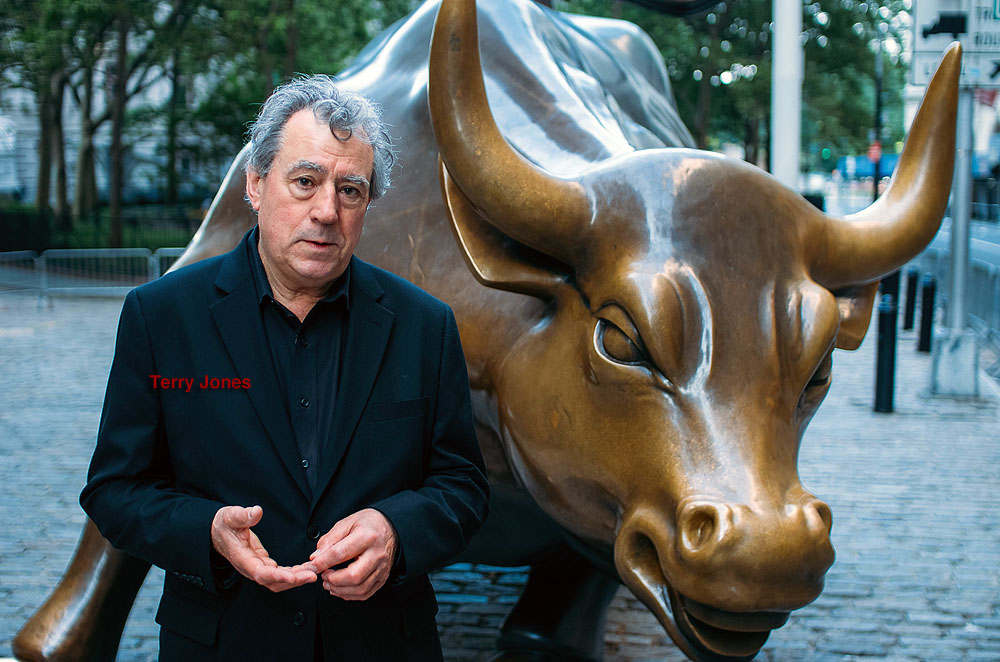 Gregg Morris, Editor: I think it’s the kind of movie that I would have to see three times. First, it blows you away. I get lost in a movie, you know? The first time that I’m watching this, so I know I’m going to have to see it a second time to see what I missed the first time, and, I hope this makes sense, there’s a visceral feel that’s going on when I’m watching this. I feel like, “Ah, oooo.” Are you guys going to do a sequel?

Bill Jones: To be honest, it’s like, when the next crash happens, you just have to watch the same film. It’s all about the same thing. It’s very interesting talking about watching it three times because, when we were editing, when these guys were talking about the economy, you had to watch it three times to try and work out what they just said. They’re using jargon that we don’t know what a lot of that jargon really means, and it’s a complicated and dry subject.

Ben Timlett: But it’s so important.

Gregg Morris, Editor: You made it so exciting.

Bill Jones: We’ve been saying that this is one of the hardest edits we’ve ever had, and that is because we weren’t able to get it from what it was into the space it’s in now.

Ben Timlett: The hardest this was, as you say, was to know that we could keep the raunchiness to it. That we weren’t just going to glaze over. That was the hardest part.

Bill Jones: We were also worried that we were just giving information, and just bombarding people with information we thought we’ve got to try and put breaks in there. That’s why some of the songs are in there.

Bill Jones: Give you a bit of time to digest what’s coming, and hopefully give you a chance to catch up.

Gregg Morris, Editor: I have to to see it Friday because I need to see it on a big screen. I saw it on a [screener online ]. I have a 21 inch Macintosh, but … Actually I’ve probably got to see it a fourth time, but I’ve got to see it on the big screen, because if I get affected by something that’s just on a 21 inches, I want to see what those big images are like when I’m in that movie theater watching it.

Bill Jones: It’s amazing what shooting it was … It looked beautiful. We got to go to Alter Ego and see Monkey Island.

Bill Jones: The animations are just so lovely, and just wonderful, and just been drawn into the when you have the Queen song, and you just … It’s a kind of mash.

Gregg Morris, Editor: People who’ve seen this movie know that … I’ve got to say it as the word “know”, know there’s going to be a bust.

Ben Timlett: You know there’s going to be one. When?

Bill Jones: I’ve been saying there’s going to be a crash in 2010, and I’m right. Still hasn’t happened yet, but I’m right.

Bill Jones: The Bank of Scotland as well announced that they thought there was going to be a crash this year.

Ben Timlett: Chinese crashed. They just switched off the machines.

Bill Jones: They closed the market, so that you couldn’t just sell your shares.

Ben Timlett: They’ve inflated since 2008. They’ve almost made it worse.

Bill Jones: They’ve just carried on the system that crashed, but just shoved a whole lot of money into …

Ben Timlett: A kind of heroin of money, for jaunty reasons, to sort of park up the financials.

Bill Jones: To prop it up, and it’s just going to blow them down. 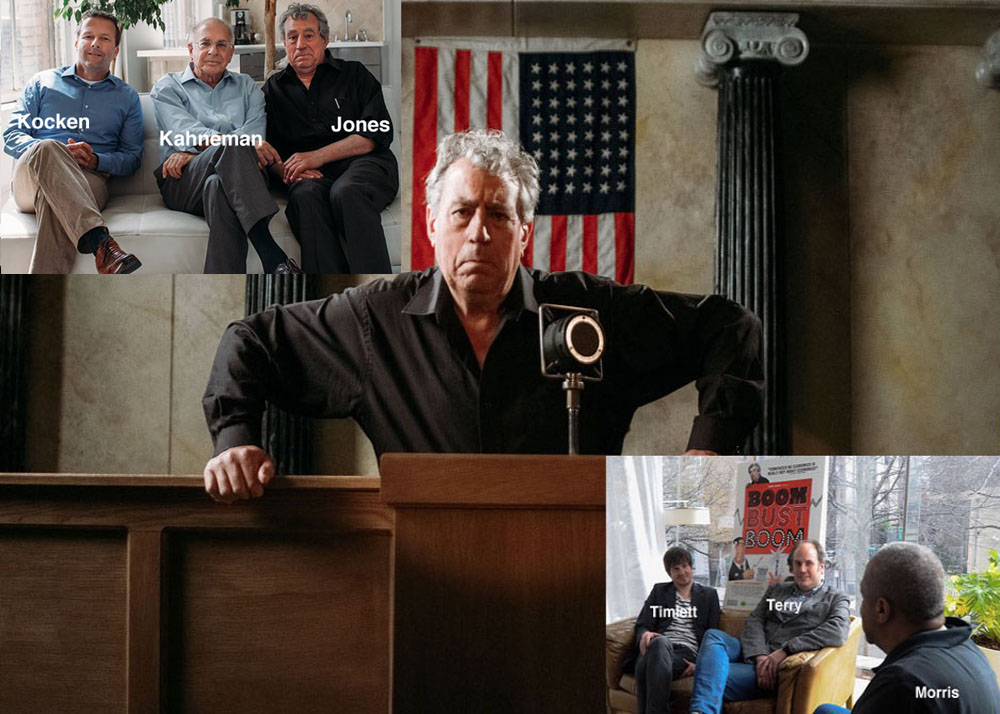 Gregg Morris, Editor: How long did you work on this?

Ben Timlett: A year and a half.

Gregg Morris, Editor: Audiences absolutely won’t go to sleep. They won’t even nod off. They will be mesmserzied, and it’s not predictable what’s going to pop up in the next scene, and when the monkey thing came at the end, I just thought, “What a kicker.” It’s just, “Wow. They can get away with this.”

Ben Timlett: Did you end up feeling depressed, or did you … Did we entertain you into depression?

Gregg Morris, Editor: Okay, I was entertained. Absolutely. I was informed, amazingly, but I know people who were affected by this. I know people who are probably going to be affected by the next one, and I literally … This is a little bit of exaggeration, I could hear their cries and their screams, and all the deplorable stirrings … It’s weird to be high about this movie, which you will be high, but it’s not fiction, you know? Even with all the Monty Python, I remember, and it’s stuff that eluded to … It was contemporary stuff that … There was fiction there. There was hope. It’s going happen, and maybe we could do something …

Ben Timlett: No, I don’t think we can do anything for the next one.

Gregg Morris, Editor: Maybe, but you didn’t completely leave the … at least [a feeling of impossible doom].

Ben Timlett: No. We very much focused on education. Trying to change the whole education establishment, and we’ve got a website, well, Boom Bust Click, and then there’s the economy website, which is all about re-education, lobbying for change education.

Gregg Morris, Editor: The economic students, those are from …

Ben Timlett: Economy.com is the whole movement, and it’s big. It’s really taking shape, and they’re doing great stuff to try and change the way economics is taught, or at least make it broader. At least. People going honestly, or whatever, they can actually … They’re looking for problems. The moment somebody says, “That asset there is cast iron and will never fail,” they go, “Hang on a minute.”

Gregg Morris, Editor: Someone should be there with one of those big posters at Bernie’s, or Hillary’s … When they’re doing a debate, and [the cameras are] scanning the crowd.

Bill Jones: I remember in the UK when we had this Chancellor of the Exchequer, Gordon Brown, who said … This was early 2000’s, “We have solved the problem of boom bust. We no longer in a boom bust.”

Ben Timlett: “No return to the boom and bust.”

Bill Jones: “No return to the boom and bust cycle.” And I remember being quite young at the time, going, “Well, that’s nonsense.” But he couldn’t see that. He’s a very intelligent guy. He steeped in the economy …

Bill Jones: He’s got all these advisors, and none of them could see it, that what they were saying was nonsense, because they were intelligent enough to convince themselves otherwise.

Ben Timlett: That they were clever enough to have solved it.

Bill Jones: If you’re clever enough you can convince yourself of anything.

Gregg Morris, Editor: He was in that 2012 horror movie. The world ends …

Ben Timlett: Okay, I made a connection when I saw him, and I really like him, but I thought, “Jesus, he was in this horror movie, so it was fate. Is there a message coming? Don’t go to the beach.”

Bill Jones: That’s the last thing of this issue.

Ben Timlett: The end of the world.

Gregg Morris, Editor: His comment, “I’d love to deal with these economists.” He was serious, and he was dead serious. He wasn’t exaggerating. He was just …

Ben Timlett: He’s angry. You believe in his anger.

Ben Timlett: He’s actually written quite a lot about it, and he engaged with it.

Bill Jones: It’s amazing. We sent it to him, and he was unsure about it, and …

Ben Timlett: We’d read a couple of things about him.

Bill Jones: Then he suddenly sent us … The next day, he sent us an email talking about Hyman Minskey. We’d never heard of him before, but he started ringing up and was like, “Oh my God. This is amazing.”

Ben Timlett: Hyman Minsky as a person, to me, I just think about the fact that he’s a professional writing in the 50’s, when America’s at it’s absolute top. Everything’s great, everybody’s got loads of money, and he’s saying, “No, this is going to cause a disaster.” Just being completely put out onto the outskirts of the profession.