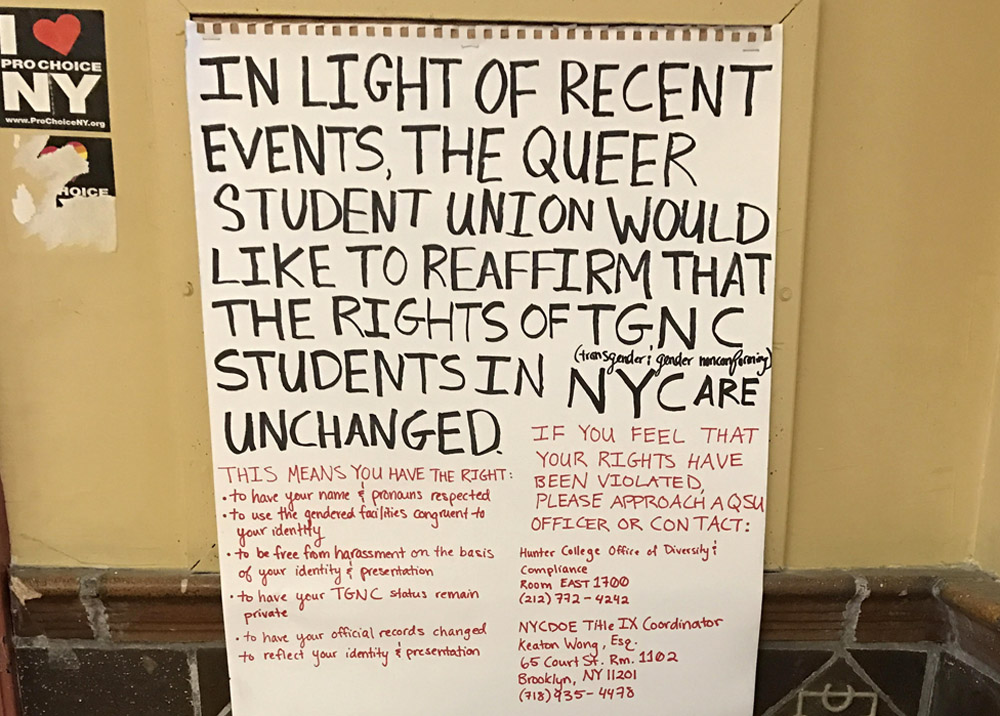 On February 22, 2017, a Wednesday night, Donald Trump revoked the Obama executive order that allowed transgender students at public schools to use the bathroom based on their preferred gender identity. According to an article on CNNPolitics.com headlined, “Trump administration withdraws federal protection for transgender students,” civil rights groups said that the revocation of their rights was a politically motivated attack on transgender students.

President of Undergraduate Student Government Matthew LoCastro was contacted about this hostile action by President Trump. The interview was conducted by email and in Q&A style.

Carlos Diaz, the WORD: Where does USG currently stand with our transgender students here at Hunter College?

USG President LoCastro: As a diverse organization, USG also supports the diversity among our student population. We strive to fight for all students rights and plan to protect our students from acts of hate and discrimination. This past year, USG worked with the Hunter College Faculty Senate to pass a resolution mandating a title 9 clause on all syllabi. We have also continued to expand our Students Stand Up Campaign against sexual assault and hope for the campaign to become increasingly more encompassing and integral to the conversation of diversity, sexuality, and gender at Hunter.

Diaz: Has the USG implemented any policies to make sure our transgender students are safe and able to use the bathroom they identify with?

LoCastro: Beyond the above described initiatives, we have worked with the WGS department (Women and Gender Studies) to support their events on sexual assault, gender, and sexuality. We hope to continue this relationship and expand it further. We support all of our students and believe that Hunter is and will continue to be a campus where students can use the bathroom they identify with.

Diaz: Will the USG implement any new policies to ensure the safety of our transgender students if they aren’t any implemented at this time?

LoCastro: We are always working with the administration to ensure safety and inclusion on campus. As opportunities to make change and new issues continue to arise, USG will continue to take action.

Diaz: I’ve interviewed the President of  QSU (Queer Student Union) and they mentioned that they’ve been trying to get a gender neutral bathroom here in this school. Have you taken any actions to ensure that?

LoCastro: This issue was not included on USG’s policy agenda this year. As the new administration comes into Hunter, the exiting admin will make sure to communicate this issue to our next class of student leaders. USG has successfully secured funds to begin installing menstrual care products into both male, female, and gender neutral bathrooms on campus.

Transgender and non-gender conforming students were asked their opinions about the Trump decision. Jay Lucero 21, of Woodside, Queens, said he believed that Trump was sending a message to the public that he didn’t care about transgender people. Lucero, who wore black dress pants, a grey bomber, Stan smith sneakers, and a grey button up shirt, is a transgender student preferring to be identified with they/them instead of “he said” and said that they felt that what Trump is doing was bullying the transgender community.

“We need a bathroom,” Lucero said. Lucero, during an interview on the fourth floor at the Hunter library, said that the community needs to stand up to this legislation and not go down without a fight and that there were more issues that need to be addressed.  In addition to bathroom use, transgender people must also face issues regarding healthcare and workplace discrimination, Lucero said.

Sonnie Kiriyu 19, of Brooklyn, criticized the decision. Kiriyu, who wore a black crop, ripped jeans, and red heels, said he felt uncomfortable about the way Trump had implemented the ban. He said that she doesn’t appear male and that using a male bathroom could make him feel uncomfortable. 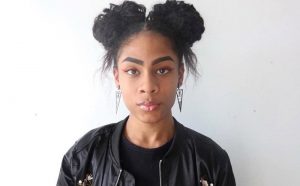 “I don’t believe that Trump has any right to do that because we should be able to go to a bathroom based on our personal gender identity,” Kiriyu said during an interview on the sixth floor at Hunter West. “I think that is so unethical.”

Nicole Ortiz, 22, of Yonkers said, “I feel that there is no need to police other people needs to use their bathroom.” During an interview on the third floor of Thomas Hunter Hal, Ortiz who wore blue sweats, a blue sweater, and running shoes, said she felt like a lot of people who supported Trump’s executive ban used a lot of fear tactics to get their point across. “it’s basically harassing people for using a bathroom.” She said.

This situation goes back to early last year, according to an article on CNN.Com headlined “North Carolina governor signs controversial transgender bill.” The governor signed the bathroom bill early last year blocking transgender individuals from using bathrooms with the gender they identified with in addition to preventing cities from passing any more nondiscrimination laws – basically, alienating individuals from the TG community. This was the start of an issue that has come into light this year with the new decision.

Despite recent events, however, according to an article on Politico.com, headlined, “Cuomo: Rights of transgender students are protected in New York,” shortly after the decision was implemented, Governor Cuomo said that regardless of what happens at the federal level, under New York State law transgender high school and college students are still protected.

In addition, according to an article on AMNY.com, headlined, “Transgender students can use the bathroom of their choice, New York Lawmakers say,” Major de Blasio had tweeted that New York City will “affirm the right of every New Yorker to use the bathroom that fits their identity. A new president will not change our values.”

This should give students here at Hunter and throughout the state a sign of hope and support.

The Queer Student Union located at Thomas Hunter Hall Room 402, had posted a bulletin poster reaffirming the rights of transgender non-conforming students are unchanged at Hunter. This means that transgender students are to have their name and pronouns respected, use of restroom according to their identity, free from harassment, and have official records changed to reflect their identity and presentations. Students who feel violated, should contact a QSU officer or Hunter College Office of Diversity and Compliance.

Jude Vetland 21, President of Queer Student Union, told this reporter to use they/them pronouns instead of the he said/she said for attribution referring to Vetland. They said that Trump decision was unfair. Vetland, during an interview at the Queer Student Union Room in Thomas Hunter Hall, said, “I think it’s a cheap shot at vulnerable children and it puts them in harm’s way.” However, Vetland expressed optimism that students are still protected in New York City and as President of the Queer Student Union, they said that the club is here to let everyone know their rights.

← Kadia Goba Reviews DEAR BASKETBALL at the 2017 Tribeca Film Festival
What Some African-American Students Think of the Bill O’Reilly Scandal? →