March 14, 2016 – The settlement follows an investigation into allegations of discrimination for failure to accommodate patients with disabilities.

As part of the settlement agreement, the NYC Commission on Human Rights is requiring Lenox Hill Radiology to modify the front and interior of its building at 61 East 77th Street, Manhattan, to make it accessible to people with disabilities; provide equipment in line with the U.S. Access Board’s accessibility standards to ensure that mammography machines are accessible; change internal scheduling, communications, and equipment purchasing policies citywide; and train staff at all its New York City locations to better accommodate patients with disabilities.

The U.S. Access Board is a federal agency that promotes equality for people with disabilities through leadership in accessible design and the development of accessibility guidelines and standards for the built environment, transportation, communication, medical diagnostic equipment, and information technology. 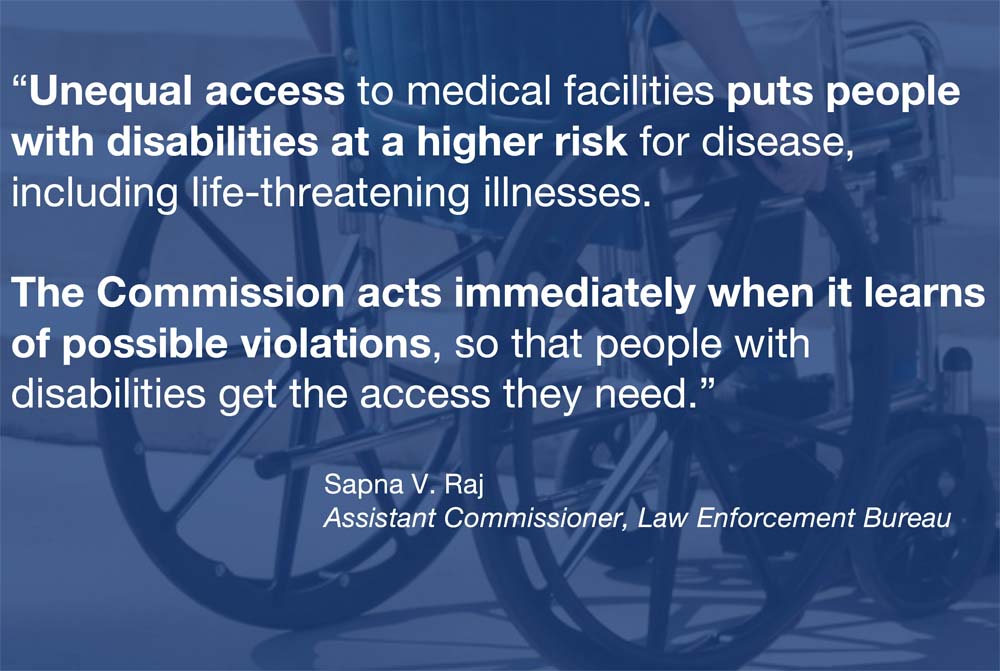 “Unequal access to health screenings and medical facilities puts people with disabilities at a higher risk for disease, including illnesses that could be life-threatening if left undiagnosed and untreated,” Assistant Commissioner of the Law Enforcement Bureau at the NYC Commission on Human Rights, Sapna V. Raj said, according to the NYC Human Rights Commission press release. “The Commission acts immediately when it learns of possible violations like these and works with entities to resolve matters so that people with disabilities get the access to the life-saving medical examinations they need to live long, healthy, and happy lives. We hope this settlement encourages health providers across the City to proactively make broad and far-reaching changes to their facilities and practices to ensure accessibility for people with disabilities and that medical manufacturers everywhere create medical equipment and devices that meet the U.S. Access Board’s current accessibility standards.”

The U.S. Access Board issued accessibility standards for medical diagnostic equipment in January, 2017, that provide design criteria to ensure that medical and diagnostic equipment, including mammography machines, are accessible to people with disabilities. Although the U.S. Access Board has authority to issue standards, the standards do not become mandatory until an enforcing authority, such as the NYC Commission on Human Rights, requires entities to adopt them.

“Access to healthcare is a basic human right. Without accessible health care facilities and the necessary medical equipment, people with disabilities could incur undiagnosed and life-threatening diseases,” said Commissioner of the Mayor’s Office for People with Disabilities, Victor Calise, according to the press release.  “We are pleased to see that Lenox Hill Radiology worked closely with the NYC Commission on Human Rights to take the necessary steps to ensure the needs of people with disabilities will be met.”

The New York Lawyers for the Public Interest’s letter to the Commission noted possible violations and described the experience of Susan Scheer, a long-time disability rights activist who experienced great difficulty when attempting to get a mammogram at Lenox Hill Radiology’s main office at 61 East 77th Street in Manhattan.

Scheer, who requires the use of a wheelchair, went in for a mammogram, was forced to change in an open, non-private room where the radiology equipment was located because the private changing room was too small to accommodate her wheelchair. Scheer also experienced extreme pain and humiliation during the examination due to the lack of accessibility of their mammography machine, in addition to the typical discomfort of getting a mammogram.

Because the mammography machine would not lower far enough, Scheer was forced to contort herself into a painful position and was asked to stand on one leg during the exam, which due to her disability, caused her extreme pain and discomfort that lasted for days afterward. Ultimately, despite her suffering, Scheer believed her exam images were inaccurate because she could not contort herself into the requested position. Staff were also unable to direct Scheer to an accessible Lenox Hill Radiology facility when she followed to make another appointment.

“As a woman who uses a wheelchair, my experience trying to obtain a mammogram was frustrating and embarrassing. More importantly, it placed my life at risk,” said Scheer, who reported the discrimination, according to the press release. “No woman with a disability should have to sacrifice her dignity to obtain a mammogram. When we don’t feel welcome, or our accessibility needs aren’t accommodated, we risk missing out on the early detection and treatment of breast cancer that can save our lives. I hope that every hospital and radiology facility in New York City will see this settlement as an opportunity to review their own accommodation policies and quickly take whatever steps are necessary to ensure that they are meeting both the letter and spirit of the Law.”

The Commission found several violations of the NYC Human Rights Law disability protections during its investigation of Lenox Hill Radiology, which the Commission is requiring Lenox Hill Radiology to fix in a settlement agreement. It is illegal in New York City for employers, housing providers, and places of public accommodation, including doctors’ offices and hospitals, to discriminate against people with disabilities by denying them access to employment, housing, and goods and services or by denying them reasonable accommodations.

More Details of the Settlement

In a settlement agreement, the Commission is requiring Lenox Hill Radiology to:

Access to buildings and services can be a life or death situation for people with disabilities in New York City. That is why the NYC Commission on Human Rights intervenes early when it learns of alleged acts of discrimination based on disability.

People who believes they are the victim of disability discrimination, including being denied access to buildings or programs or denied a reasonable accommodation, should call 311 and ask for NYC Commission on Human Rights or call the Commission’s Infoline at 718-722-3131. Reports may also be filed anonymously. People may also report discrimination on the Commission’s website.

“Being able to get a mammography is, without exaggeration, a matter of life and death, yet what Ms. Scheer experienced at Lenox Hill has long been the norm for women with disabilities,” said Chief Operating Office at Independence Care System, Regina Estela, according to the human rights commissions’ press release.  “Very often, facilities and equipment are not accessible, staff are not trained in disability-competent care, and patients with disabilities endure pain and humiliation, only to receive inaccurate or inconclusive test results.”

“This settlement is an important step in making an essential women’s health service accessible at Lenox Hill Radiology’s facilities and, equally important, in reminding all healthcare providers of their obligation to proactively accommodate this large and growing population.”

“When people with disabilities are denied access to medical care because of inaccessible buildings or equipment, they face the untenable choice between addressing the problem and maintaining their relationship with their medical provider,” said Director of the Disability Justice Program at the New York Lawyers for the Public Interest, Ruth Lowenkron, according to the press release. “Vindicating one’s rights must not come at the expense of continuity of care. New York Lawyers for the Public Interest is grateful that the Commission can investigate and remedy such medical access problems, while preserving patient anonymity.”

“We applaud the Commission’s work in ensuring accessibility for all at Lenox Hill Radiology.”

“Disparities in access to quality healthcare are a matter of life and death, particularly for people with disabilities, women of color, and immigrants,” said President and CEO of The New York Women’s Foundation, Ana Oliveira. “We commend the NYC Commission on Human Rights for taking intentional steps to address this issue specifically as it pertains to patients with disabilities, with their recent settlement with Lenox Hill Radiology.”

“At The New York Women’s Foundation, we know that a woman’s health and overall well-being is directly connected to her economic security and ability to provide for herself and her family. We must remain vigilant in our efforts to ensure that people with disabilities have full access to quality healthcare that meets all of their needs.”