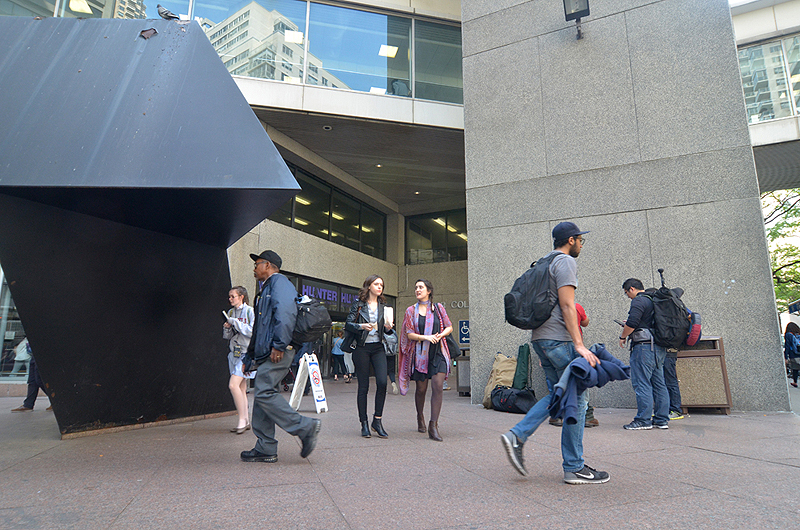 Hunter students have strong opinions about the 2016 presidential race.

This reporter was one of several assigned to conduct random interviews on campus about students’ opinions and preferences in the remaining days of the presidential campaign, and two interviewed in front of the Thomas Hunter Hall Building said they planned to write in candidates on their ballots.

“I am not voting for Trump or Hillary. I am going to vote Bernie Sanders, to still exercise my right to vote,” said Brooklynite Michael Bruno, 21, who is majoring in biology.

“You know, people praise Hillary for her experience when she should really be put in jail for the amount of illegal things she has done this election. And Trump is just the antichrist,” said Bruno, wearing Nike sweatpants, a gray T-shirt and black Nike sneakers when he was interviewed. Truth be told, Clinton has been accused by Trump and his supporters of engaging in illegalities and although Bruno also said she has committed illegal acts and has been accused of improprieties regarding her email activities as Secretary of State under Barack Obama, she has not been charged with crimes or ethics violations. But she is linked to many scandals, according to an October 28 article in The Atlantic.

Staten Island resident Paul Walkonis, 19, majoring in English, said she planned to vote for Michelle Obama. “If there is anyone who can get the job done, it is she. Trump and Hillary are just not an option. Michelle has the experience we need and the right ideas as to where this country needs to head towards,” said Walkonis, wearing a blue button-down shirt, denim jeans and New Balance sneakers, “A few months ago, I found out about the write-in candidate option on a voter’s ballet from a friend. Regardless, if she wins or not. I feel good about my decision,” said Walkonis.

Here’s Why Michelle Obama Will Never Run for President, was the headline of a Fortune magazine story published in July. The First Lady, according to the article by Valentina Zarya, is a reluctant First Lady and she doesn’t like politics in general.

“I will not run for President,” the First Lady told an audience at the South by Southwest festival in Austin, Texas in March.

A write-in candidate is a one that does not appear on the ballot but for whom voters may vote nonetheless by writing in the person’s name. Typically, write-in candidates have a very small chance of winning, but there have been some strong showings by such candidates over the years, according to Wikipedia and other sources. Nevertheless, over the years, write-in candidacy has been regarded derisively. According to The American Prospect, during the 2012 presidential election, in Travis County, Texas, Jesus received more presidential votes than Hillary Clinton, Jon Huntsman, Willie Nelson, Mickey Mouse, and “Nobody.”

“Write-in candidates have always been prime fodder for keep-your-day-job pranksters and patriots who can’t find it in their heart to vote for anyone on the ballot. And Mickey Mouse is always the most frequent guest-star in the discard write-in pile,” wrote Jaime Fuller in her November 5, 2013 article, If You Give a Mouse a Vote.

Write-In Candidates in 2016 from MyTimeToVote.

What follows are federal guidelines for presidential candidates.

Katherine Hernandez can be reached at Katherinehernandez71@Gmail.com