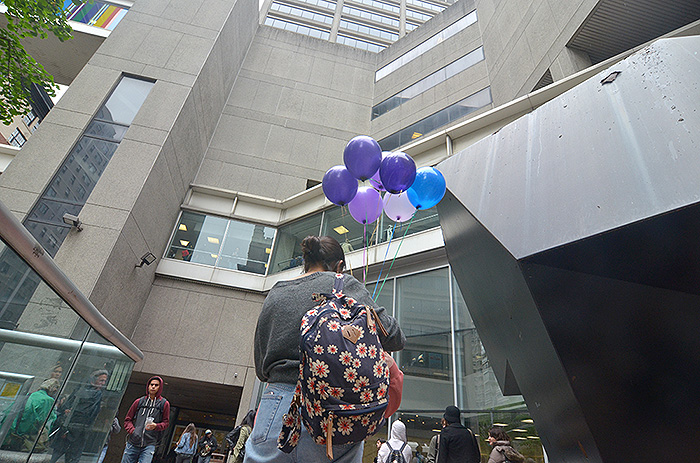 First in a series of articles for a journalism ethics project reporting on how Hunter millennials select news sources.

Five student’s were interviewed about their news consumption habits, and it turns out all rely on apps and social media to stay informed on what they consider news.

Between juggling school assignments, full time jobs, and other family responsibilities, the interviewed students say they barely have enough time to pick up a physical newspaper. “I primarily find news via iPhone applications such as CNN news or headlines on yahoo news,” said Avid Maldonado, a 21-year-old media studies major, who wore a white top with basketball shorts and sneakers with a book bag when he was interviewed in Hunter’s Library.

He also said that he checks these sources because they are easily accessible on his mobile device, giving him access on his terms. Other students expressed similar reasons for relying on smart phone applications as their primary source for obtaining news. “I primarily get my news via phone applications because they’re quick and easy to check while on the go,” said Kashima Grant, a 27-year-old media studies major with a concentration in analysis and criticism. She wore navy blue pants with a green and white patterned button up top and converses when she was interviewed in the third-floor student cafeteria.

Although, they get the news via phone applications, each had his or her own interpretation of what is news. “News is information that is meant to enlighten people to situations and aspects that are impactful to their lives,” said Andrew Henry, a 21-year-old media studies major who anticipates graduating in the spring, 2017. He wore a bomber jacket with jeans and sneakers and a baseball cap when he was interviewed on the third-floor bridge.

A spring time performance by students in front of the Hunter North Building.

“News is any current event that generates traffic through different media outlets,” said Carla Mota, a 27-year-old City College media communications and art major who is taking classes at Hunter on an e-permit. She wore a white T-shirt with jeans and flats when she was interviewed in the student Cafeteria.

Not only did the students have various interpretations of what is news, each consumed a variety of different news topics.

“I usually gravitate towards news on the election, celebrity gossip, fashion, award shows, sports news, and other miscellaneous topics such as whatever is trending at the moment, said Julia Suarez, 19, who has yet to decide on a major. She wore a blue led zeppelin T-shirt with black shorts and black boots when she was interviewed in the college library.

A few interviewed said that they followed the same news sources as their friends and family. Henry said, for example, “I share similar tastes in news with my friends and sister because we are all around the same age group and can discuss similar stories whenever we are together.”

Grant said, “I don’t think I follow the same news as my friends and family, they follow sports or political related news.” Grant also said she focuses on celebrity news.

The current state of the news media is complex. People are now able to obtain news in numerous ways other than printed medium. Interviewees said they rarely rely on physically printed medium to stay informed about news. Another complexity regarding news is discussed in an article written by Farhad Manjoo, who writes the New York Times State of the Art column. How the Internet is Loosening Our Grip on the Truth is the headline of his November 2 article.

“Next week, if all goes well, someone will win the presidency,” he writes. “What happens after that is anyone’s guess. Will the losing side believe the results? Will the bulk of Americans recognize the legitimacy of the new president? And will we all be able to clean up the piles of lies, hoaxes and other dung that have been hurled so freely in this hyper-charged, fact-free election?

Much of that remains unclear, because the internet is distorting our collective grasp on the truth.”

Avid Maldonado said he was not a fan of the way that the news media are suppose to do their jobs. “Each day that passes I believe the news is becoming more unbelievable,” he said. “Some days reporters don’t know what to talk about, so tabloids use sensational headlines to capture viewers attention instead of reporting actual news.”

Andrew Henry expressed another opinion. “Personally I don’t think there is anything wrong with the shape of the news media today,” Henry said. Yet, he also admitted that he is pretty nonchalant about current events in general.

If the students interviewed for this article reflect the overall impression of college students in general, then it is safe to say that millennials consume news and information in a very different way from those of previous generations. Articles, such as, <i>How Millennials Get News: Inside the habits of America’s first digital generation,</i> published in the American Press Institute support this writer’s opinion.