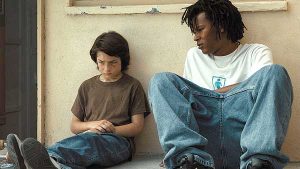 Jonah Hill’s directorial debut is a frank, intimate, and emotionally layered reflection on an unlikely coming-of-age in the world of 90s L.A. skate culture. Thirteen-year-old Stevie (Sunny Suljic), growing up with a loving but largely absent mother (Katherine Waterston) and a resentful brother (Lucas Hedges), seeks refuge with older kids who hang out (and barely work) at a Los Angeles skate shop. The energy between Stevie and his crew, played by Ryder McLaughlin, Olan Prenatt, Gio Galicia, and Na-kel Smith, fuels a film that is at once lyrical, hilarious, terrifying, and just…real.

Tickets for Mid90s are on sale now and are $25; $20 for students and Film Society members. To learn more about NYFF tickets, including a complete list of prices, discount options, and our rush and standby policies, click here.

Film Society of Lincoln Center
The society is devoted to supporting the art and elevating the craft of cinema. The only branch of the world-renowned arts complex Lincoln Center to shine a light on the everlasting yet evolving importance of the moving image, this nonprofit organization was founded in 1969 to celebrate American and international film. Via year-round programming and discussions; its annual New York Film Festival; and its publications, including Film Comment, the U.S.’s premier magazine about films and film culture, the Film Society endeavors to make the discussion and appreciation of cinema accessible to a broader audience, as well as to ensure that it will remain an essential art form for years to come.