The festival will feature more than 83 films representing 10 countries, spanning all genres including features, shorts, documentaries, web series and experimental films starring, about and for the U.S. Latino community.

This year, the festival will open with the New York premiere of the film PRINCESS OF THE ROW from director Van Maximilian Carlson and starring Martin Sheen, Edi Gathegi, Ana Ortiz, Tayler Buck, Jacob Vargas, among others. PRINCESS OF THE ROW is the inspiring tale of a runaway foster child who will stop at nothing to live with the only family she knows: Her father … a homeless, mentally ill-veteran fighting to survive on the streets of LA’s skid row.

The Festival returns with a star-studded line-up of screenings, including a special showcase of the beloved Bronx-set classic I Like It Like That. Celebrating its 25th anniversary, the screening will be joined by the film’s cast — fully reunited for the first time since its premiere in 1994. 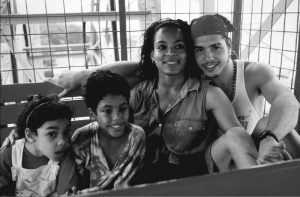 The debut of writer/director Darnell Martin, and the first-ever major studio release to be written and directed by an African-American woman, is a charming, funny, and realistic account of a young Latina mother trying to contend with life in the Bronx. In honor of the late Oscar- nominated filmmaker John Singleton, NYLFF is honored to present NYLFF Summer Cinema, an outdoor screening of POETIC JUSTICE, with a special appearance by his daughter Justice Singleton.

Starring music superstars Janet Jackson and Tupac Shakur, and peppered with the poetry of Maya Angelou, POETIC JUSTICE follows the story of Justice (Janet Jackson), still grieving after the murder of her boyfriend, writes poetry to deal with the pain. After an unexpected turn of events, she meets Lucky (Tupac Shakur). But is she ready to open her heart again?

Closing the Festival, NYLFF presents El Proyeccionista (The Projectionist), the first Dominican film to ever close the festival. The acclaimed film is the latest feature from prolific, young Dominican writer-director José María Cabral – whose last film, Woodpeckers (Los Carpinteros), was the first Dominican film to screen at Sundance – serves up some fluorescent Dominican noir in a riveting, genre-bending homage to the power of pre-digital cinema as seen through the lens of an old-style traveling cinema owner.

In an effort to support and promote the next generation of online content creators, NYLFF and Google will present, once again, FUTURO, a one-day digital conference featuring conversations from top thought-leaders, executives, and influencers in the digital space. Panels cover the most innovative and upcoming trends in the Latino digital space. Past panelists include: TV personality Natasha Martinez; Actor Allen Maldonado, Comedian TravQue, Influencer/ Entrepreneur John Henry, Comedian Radel Ortiz, Trendsetters Coco and Breezy, among others.

Admission is free for each panel and tickets are distributed in a first come, first serve basis.

This year, NYLFF, in partnership with HBO Latino presents Latinos Stand-Up, a competition in search of the best Latino stand-up comedians around the country. Designed to support emerging talent and increase awareness and representation of Latino voices in the comedy industry, aspiring comedians are asked to submit their entries no later than Friday, July 19th.

The top five comedians are invited to perform live at NYLFF on August 16th, hosted by actress, comedian and writer Gina Brillon. Reviewed by a panel of judges, the winning comic will receive a paid opportunity to appear in an upcoming HBO Latino Entre Nos comedy special, including an all-expense paid trip to the taping, provided by Viva Pictures, and more.

“We are proud to celebrate our 16th Anniversary with a salute to ground breakers from the past while acknowledging the present and future of Latino content. This year’s program demonstrates the strength and diversity of our communities’ individual and shared experience in the United States that continues to ignite our screens. NYLFF has established itself as the leading identifier of Latino/Multicultural talent.” said Calixto Chinchilla, Founder of NYLFF

“HBO has been proudly supporting the New York Latino Film Festival since its inception,” said Axel Caballero, Director of Corporate Social Responsibility, HBO. “We are thrilled to be able to open doors and provide opportunities to diverse, groundbreaking Latino voices. HBO has a longstanding reputation for discovering and nurturing new talent and we are excited to continue creating spaces that highlight culturally relevant experiences.”

“New York has the most diverse Latino population in the world, and their contributions have always been integral to the artistic and cultural fabric of our city,” said Anne del Castillo, Commissioner of the Mayor’s Office of Media and Entertainment. “We are proud to support the 2019 New York Latino Film Festival which showcases the broad diversity of Latino voices with an exciting line-up of programs.”

The New York Latino Film Festival (NYLFF) is the nation’s premier Urban Latino film event founded by Calixto Chinchilla. Since its inception in 1999, each year, the NYLFF brings together more than 20,000 movie fans and industry executives for a celebration of culturally relevant and entertaining experiences that aims to build audiences for Latino cinema, support the film community with professional development and foster relationships for Latino talent. Programming includes the flagship film festival in New York City, the Futuro Digital Conference, NYLFF Summer Cinema series, as well as competition and community programs. For more information, visit www.NYLatinoFilmFestival.com.

HBO®: Serving iconic, award-winning programming to 140 million subscribers globally. A subsidiary of WarnerMedia, HBO is the world’s most successful pay TV service with an extensive array of programming that includes some of the most notable titles to be on television including Game of Thrones®, Big Little Lies®, Westworld®, The Sopranos®, Sex and the City®, Band of Brothers®, and The Wire®.