SENIOR ESCORT SERVICE, directed and written by Shaina Feinberg – and starring Jeff Seal, Mona Chalabi, Drae Campbell, Chris Manley, Chris Roberti, the director herself as well as a lot more others – had this reviewer’s head spinning.

A comedy about a daughter on a tour of grief caused by her father’s sudden death, so it was publicized. A poignant memorial punctuated with laughs and jokes throughout the film, as it also was publicized (and even in the Lower East Side Film Festival Q&A for the film, Feinberg was wisecracking).  I felt as if my mind was sucked into the vortex of an hallucinogenic-schizophrenic space time continuum with classy cinematography and soundtrack to match and an inexplicably irresistible tale. I was mesmerized like the deer on the road transfixed by the impending doom bearing down it though for me it wasn’t doom but transfixing taking place because of scenes after scenes of a wickedly subversive film powerfully comedic – that I couldn’t make sense of. 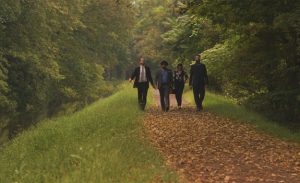 At the screening, I was sitting next to actors from movie and they were laughing throughout the film. 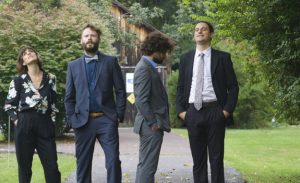 I wanted to see the movie at least two more times before writing a review but, alas, no screeners available and no dates of future showings, the latter making me wince, no, making me cringe. Thus, I had to crib to try to write something coherent  …

Two years prior to his death, Shaina’s dad asked her to create a web series called Senior Escort Service. Scenes of the film SENIOR ESCORT SERVICE show S. Feinberg happily driving an elderly man around the city but the picture focuses her grieving process, powerfully comedic, as she plans a pilgrimage to his grave site to sing his favorite song. But the film includes her seeking comfort at dinner parties from friends reminiscing on ghostly encounters and symbolic dreams starring their deceased loved ones.

Opining in the Newspaper of Records, she writes that she googled how long it takes a body to decompose … and “how many people get killed by falling coconuts each year” … and “movies to watch when you grieve,” also writing, “I have always found movies comforting … that “They’ve gotten me through breakups, awkward phases and most of my pregnancy. Movies are a perfect container for feelings. Which is probably why I started making them in the first place.”

Crib 3: THE LO-DOWN – News From the Lower Eastside:

“The whole movie is out of order and kind of schizophrenic” she is quoted in The Lo-down, “which was also my experience of grief – because when it first happens, you’re just devastated and then you kind of mourn for a while and then you think ‘Oh, I think I’m over it,’ and then, [you realize] ‘no, I’m not over it at all, this is terrible…’ so it kind of comes in waves.”

With all the streaming venues, film festivals and other venues for movies, I don’t want to believe that I’m not going to be able to see this film at least twice in the next few weeks.

Have angst, will travel. Someone please advise.