[Editor’s Note: WORD Reporters Malik Young and Arber Rexha were assigned to contact Queens College student leaders to get as much lowdown as they could for an article about about what students could expect from the new chancellor, Felix Matos Rodriguez. Young was assigned to focus on campus political leaders and others who might cross paths with him when he trekked to the college. Rexha was assigned to interview the student heads of campus media plus others who might cross paths with him as well as on his trek to the Queens Campus. Rexha’s article is published here.]

Carmine Couloute, Vice president of the Queens College Student Association and a political science major, was the first of several Queens student leaders interviewed for this article about what CUNY students could expect when Queens College Felix Matos Rodriguez begins his reign May 1. 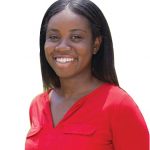 “He is a very human, he gives students a lot of attention and one on one time to voice their opinions and concerns and he is huge on diversity in his cabinet,” said Couloute, who is also minoring in business and liberal arts and is also a member of the Caribbean Students Association and the Black Student Union.

Matos Rodriguez increased the percentage of Latino students from 13 percent to 21 percent, she said. “He was a gem to us so I know he will be a treasure to all of CUNY,” she also said. 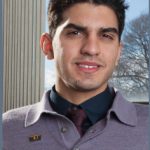 Farbod H. Moghadan, picture left, CUNY University Student Senate Vice Chair of Senior College Affairs and Student Government and also a political science major, said that he is not aware of “a college president that is more liked by all of campus, campus stakeholders, student organizations, faculty, staff and administrators.”

“Because he is a man of color and has come up through CUNY, he is able to relate and connect with students on a higher level than prior chancellors before him,” she also said.

Although he is not a Queens student, Hunter student John Aderounmu, a CUNY BA student who is chair of the CUNY United Student Senate, was contacted for an interview. He has yet to respond. CUNY USS is, according to its mission statement, “charged with with the mission of preserving the accessibility, affordability, and excellence in higher education within the City University of New York; the organization is charged with protecting the rights of the student body, furthering the cause of public higher education and promoting the general welfare of its student constituents and the University.”

Queens College sits on an 80-acre campus in the Kew Gardens Hills subsection of Flushing, Queens, with a student body representing over 170 countries, and is consistently ranked among the leading colleges in the nation for the quality of its faculty and academic programs, the achievement of its students and its affordability.

He was appointed  the tenth president of Queens College in August 2014 after five years as president of Hostos Community College, CUNY. His Career spans both academia and the public sector, that is, from 2006 to 2008, Matos Rodriguez served as Puerto Rico’s Cabinet Secretary to the Department of Family Services.

At Hunter College, CUNY he  directed its nationally renowned Center for Puerto Rican Studies. He has served as Grand Marshall of the 2012 Puerto Rican Day Parade, received numerous awards and honors, including the Union Community Leadership Award and ASPIRA of New York Circle of Achievers Award. In 2017, he was elected as board chair of the Hispanic Association of Colleges and Universities (HACU).

Matos Rodriguez is married to Dr. Liliana M. Arabia, a dentist and they have two sons; Lucas and Juan Carlos.

Malick Young can be reached at malik.young30@myhunter.cuny.edu

← The 18th Annual Tribeca Film Festival Jury Is Comprised of …
What Could CUNY Students Expect from the New Chancellor? →