Survey of Rarely Screened films by the Trailblazing Feminist Filmmaker

“As a female director, Dulac had a tremendous impact on cinema in an era in which women were largely excluded from the field.” — Tami Williams, Germaine Dulac: A Cinema of Sensations 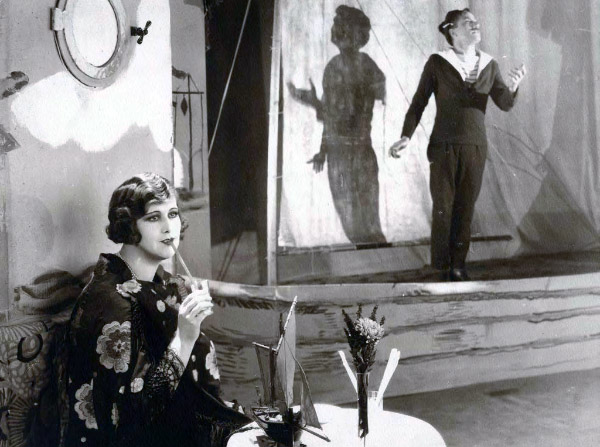 A feminist and socialist artist and thinker of the 1920s and ’30s, Germaine Dulac directed close to 30 fiction films in her lifetime, playing with narration, montage, and visual effects, and making the case, in both films and writing, for a “pure cinema” approach that took full advantage of the medium’s unique properties.

Despite being frequently overlooked in film history, Dulac’s bold experimentation helped legitimize cinema as an art form that would be on the same footing as painting, dance, theater, and music. For Dulac, only cinema was up to the task of capturing the spirit of a generation of people scarred by World War I who were emancipated by the new freedoms of the 1920s and whose daily lives had been shaped irreversibly by industrialization and social and cultural modernity.

A lesbian woman, Dulac made films that both explicitly employ and and implicitly embody queer aesthetics. Her films such as L’Invitation au voyage and Princesse Mandane use dance and symbolism to subvert gender expectations and explore queerness, a socially taboo topic in the 1920s.

The survey will feature Dulac’s early work, including the proto-impressionist La Cigarette; the riot-inducing The Seashell and the Clergyman, considered the first surrealist film; the feminist classic The Smiling Madame Beudet; as well as Dulac’s final commercial feature and one of her most explicitly queer films, Princesse Mandane. The series will also include a free talk with Dulac expert Tami Williams to discuss Dulac’s place in the history of cinema.

After its run at the Film Society of Lincoln Center, the series will continue on to UCLA Film & Television Archive (Los Angeles, CA).

Organized by Amélie Garin-Davet and Dan Sullivan, in collaboration with curatorial advisor Tami Williams. Co-presented with the Cultural Services of the French Embassy, New York.

Tickets for Germaine Dulac went on sale August 10, and are $15; $12 for students, seniors (62+), and persons with disabilities; and $10 for Film Society members. See more and save with the 3+ film discount package. Learn more at filmlinc.org.

Thèmes et variations (1929, 12m, 35mm)
Dulac returned to the arabesque form in this abstract study of a dancer, a dialectical sequence of comparisons and contrasts that places the human body in opposition to natural and mechanical phenomena alike.

Disque 957 (1929, 6m, 35mm)
Earlier in her career, Dulac had developed a narrative script about the life of the Romantic composer Frederic Chopin. This abstract study of the interplay of light and movement on a spinning record was conceived as a “visual impression… [of] listening to Chopin’s Preludes 5 and 6.”

The Seashell and the Clergyman / La Coquille et le clergyman (1928, 39m, 35mm)
Based on a script by Antonin Artaud, Dulac’s best-known work is a masterful exploration of rhythm within an image and between images, and is considered the first surrealist film.
Friday, August 24, 7 pm
Sunday, August 26, 6 pm

La Mort du soleil (1922, 83m, 35mm)
Written by André Legrand, this drama stars Denise Lorys (who had previously played a liberated countess in Dulac’s La Belle Dame sans merci) as a scientist trying to find a balance between her domestic responsibilities and her work at an orphanage for tubercular children, allegorizing the plight of the modern woman after World War I. Dulac deftly uses an array of visual and editing techniques to conjure her protagonist’s inner life, once again striving to create a cinematic language that could do justice to the collective psychology and social issues of her time. Print courtesy of the Centre national du cinéma et de l’image animée (CNC).
Friday, August 24, 9:15pm
Sunday, August 26, 8:15pm

L’Invitation au voyage (1927, 33 min, 16mm)
Dulac referred to this film—titled after a poem by Baudelaire, and concerning the emancipation of a married woman who meets a young military officer at a cabaret—as a “melody of images” and a direct response to the literary/theatrical bent of the cinema of her time.
Saturday, August 25, 2:30pm
Tuesday, August 28, 7:00pm

Antoinette Sabrier (1928, 66m, 35mm)
Adapted from a play by Romain Coolus, whose work Dulac had covered as a theater critic at the turn of the century, this atmospheric and socially inquisitive film tells the tale of an independent, sexually liberated woman (Eve Francis) who is torn between her husband (Gabriel Gabrio) and her lover (Paul Guidé). Controversial at the time of its release, Antoinette Sabrier finds Dulac using her bold sense of visual rhythm to achieve a complex portrait of a woman trapped in an unhappy marriage and a nuanced investigation into human intimacy, with her characters’ emotions expressed through then-innovative cinematic techniques such as slow motion and associative montage. Print courtesy of the Centre national du cinéma et de l’image animée (CNC).
Saturday, August 25, 4 pm
Tuesday, August 28, 8 pm

Princess Mandane / La Princesse Mandane (1928, 77m, 35mm)
Dulac said of this lyrical, gestural film, a loose adaptation of a novel by Pierre Benoît and her final commercial production: “Benoît’s hero becomes a victim of the cinema. His obsession with all the glorious adventures on the screen forces him to abandon his peaceful life and roam the world. He becomes transported into a country full of wonders, a marvelous kingdom ruled by a fairy princess. A moral ends the story: After many adventures, my hero prefers to find happiness in simplicity.” Though with this fable comes a final twist, a turn of events that, it has been argued, constitute one of the most explicitly sapphic moments in Dulac’s cinema. Print courtesy of the Centre national du cinéma et de l’image animée (CNC).
Saturday, August 25, 7:00pm
Wednesday, August 29, 7:00pm

Âme d’artiste (1925, 100m, 35mm)
This backstage comedy was an important work in Dulac’s tireless pursuit of a “pure cinema,” an approach to the medium that sought to demonstrate that it had more modern and expressive tools at its disposal than any other art. Adapted from a play by Danish poet Christian Molbech, its narrative concerns the drama that ensues amid an encounter between a fragile, sensitive poet and an independent actress, effectively reversing conventional gender dynamics. Dulac includes newsreel footage and deploys a typically audacious array of visual effects to once again put the modern age onscreen. Print courtesy of the Cinémathèque Royale de Belgique.
Sunday, August 26, 2 pm
Thursday, August 30, 7 pm

Film Society of Lincoln Center is devoted to supporting the art and elevating the craft of cinema. The only branch of the world-renowned arts complex Lincoln Center to shine a light on the everlasting yet evolving importance of the moving image, this nonprofit organization was founded in 1969 to celebrate American and international film. Via year-round programming and discussions; its annual New York Film Festival; and its publications, including Film Comment, the U.S.’s premier magazine about films and film culture, the Film Society endeavors to make the discussion and appreciation of cinema accessible to a broader audience, as well as to ensure that it will remain an essential art form for years to come.

← Projections, the Film Society of Lincoln Center’s Annual Showcase of Innovative and Experimental Work
WE THE ANIMALS Film Review →