First in a Series – Pictures by Constanza Falco An unprecedented semester fall opening during an historical moment when COVID-19 was still menacing and lethal though not as lethal when New York City shut down. Picture by Constanza Falco.

The lobby of Hunter’s West Building on 68th Street and Lexington Avenue was set up as a college fair help center during the two weeks leading up to August 25, the start of  the fall semester, to help students deal with the logistical realities of the reopening of the College’s on-campus classes.

In order to enter the main campus, which has three towering buildings, students were required to verify that their vaccination cards were properly uploaded to CUNYfirst, a fully integrated resources and services tool for all City University of New York colleges.

Three Hunter students were interviewed about their experiences by this reporter. Other WORD writers have been assigned to this assignment. Hunter is under enrolled his semester according to scuttlebutt, official and otherwise; no 2021 official stats were available at the time this reporter was assigned to write this article. According to officlal demographic statistics for 2019, Hunter had 17,121 undergraduates on its three campuses and facilities in several Manhattan neighborhoods.

“The process of actually getting on campus went pretty smoothly for me since I uploaded my vaccine proof a while back,” said Allegra Acevedo, interviewed by phone, a junior majoring in Women and Gender Studies and minoring in journalism. The 21 year old, living on 91st Street and Lexington Avenue, also said, “I would say it was hard getting back into the groove of things after being so used to online. I forgot how much time I need to allocate for commuting and stuff beforehand.” 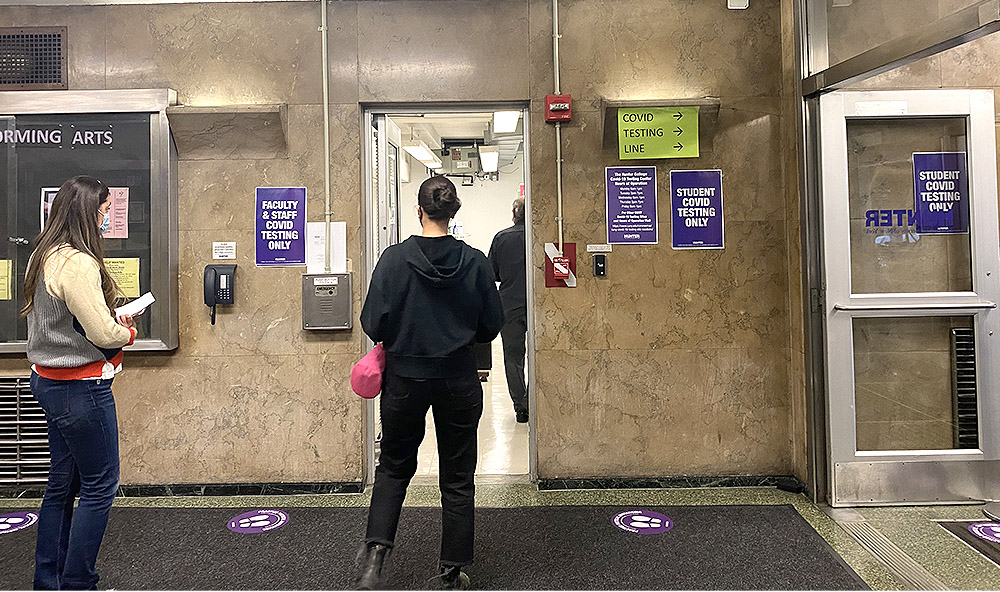 Julia Esakoff, 22, who hasn’t chosen a major yet, also was interviewed by phone: “After deciding to return to college after a year hiatus, I found the process to be relatively difficult. I had holds on my account from years prior, and when I called the admissions office to have them removed so I could register for classes, I couldn’t get a hold of anybody.”

Esakoff, who lives in Harlem, also said, “Eventually, they responded and I was able to register, but it was later than I’d have liked. I’m happy it worked out in the end. They weren’t answering the phone because the office was closed due to Covid-19, which is understandable, but makes it difficult for the students.”

This reporter, too, experienced problems with the Registrar’s Office. Phoning in and emailing were unsuccessful, and when I visited the office it was closed. I eventually was able to contact them by email.

Conrado Falco, 29, class of 2016, who worked at Hunter until the beginning of the pandemic as an assistant production manager for the Theatre Department, told this reporter, “They are never going to respond to you by email. Forget about it. That’s where Sajda [his wife, also an Hunter alumna] worked and they fired everyone during the pandemic.” Falco lives in Astoria, Queens.

Salome Bustamante, 21, of Bedstuy, Brooklyn, said, “I signed up for a class that I am super interested in, but it’s a remote class that meets once a week, and I registered late, so I have not been able to go to class yet, because I don’t have the ZOOM link.”

“I still haven’t gotten a response. I can’t reach her (the instructor) online and there is no physical place to knock on her (instructor’s office) door,”she said in an interview during one of her journalism classes. The media studies major also said she couldn’t reach the department chair.

Sadiya Hussain, 20, a City College of New York junior, who was showcased in a Chronicle of Higher Education article, headlined, “The Semester of Magical Thinking,”, was relieved to be back on campus, although she saw fewer students than she’d expected. “Learning online, I was very easily distracted,” she was quoted as saying and that “being back on campus, I feel like I’ll be more engaged in student activities.” 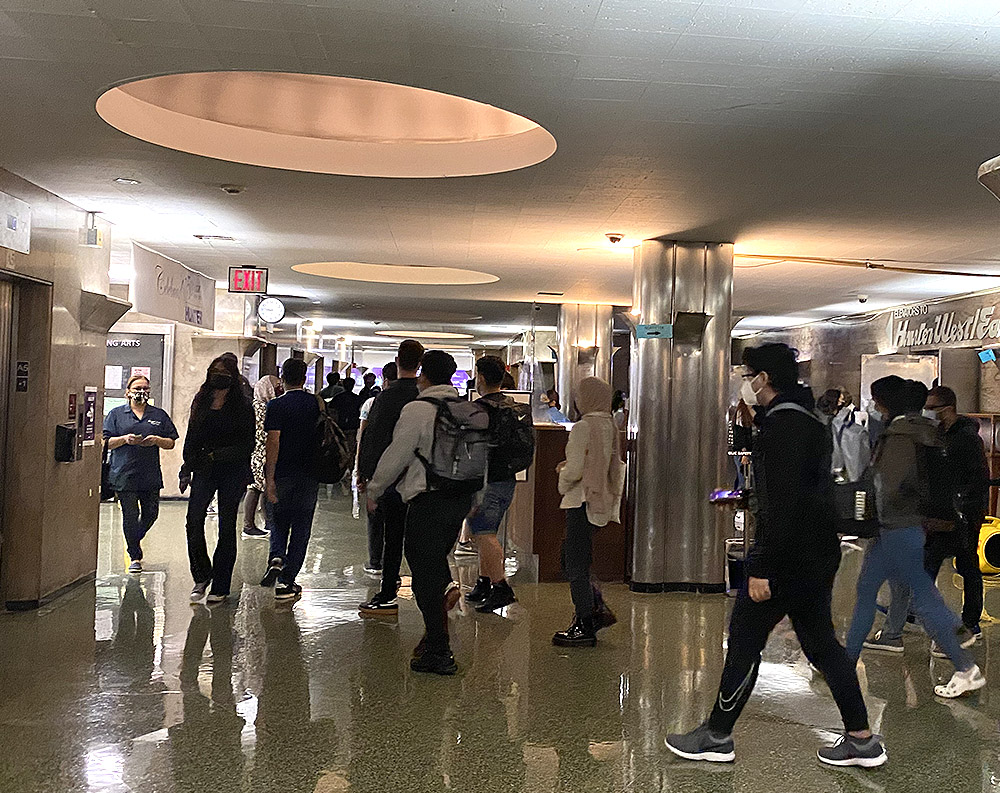 Masks are required to get on campus and security guards have been seen reminding students to mask up and mask up properly. Picture by Constanza Falco.

New York City officially reopened for business and commerce July 1, and it wasn’t without hitches. Hunter’s reopening had its fair share. The three students interviewed for this article said that an unopened and unavailable Registrar’s Office was a hitch for them. They were unsuccessful in uploading vaccination proof, and their classrooms were too small for students to sit 6 feet apart, among other grumblings.

Before students showed up, Hunter President Jennifer J. Raab emailed faculty, staff, and other employees about a number of matters. A reference to a few of those follow. “The number of approved vaccinated students increases daily, and we are pleased that in 20 percent of our in-person sections, all students are fully vaccinated,” she wrote. The CUNY system, according to Raab and other CUNY information sources, is working hard to keep everyone safe and minimize the spread of COVID-19. Revised quarantine rules now allow for vaccinated individuals in close contact with someone testing positive to be able to miss class to quarantine. Teachers have to have a seating chart for students to remain in the same seat for the semester, in order to make the process of contact tracing more efficient.

New visitors can only enter the Hunter by appointment or RSVP, and have to request a visitor access pass at least 48 hours before said appointment. They will be asked to provide proof of vaccination as well.

President Raab also wrote, “CUNY will strictly enforce the policy that only vaccinated students will be able to attend in-person class sessions after October 7,” and that “we need your help in reaching the many students who have registered for an in-person class but have not yet submitted vaccination information nor signed up to take a CUNY Covid test.”

Things were really bleak back then.

Constanza Falco can be reached at constanza.falco40@myhunter.cuny.com

← Damn the Pandemic, Full Speed Ahead Film Review of …
SALARYMAN, Directed by Allegra Pacheco
Students Dealing with Challenges Unlike Any in Recent Memory Say They Are Cautiously Optimistic →