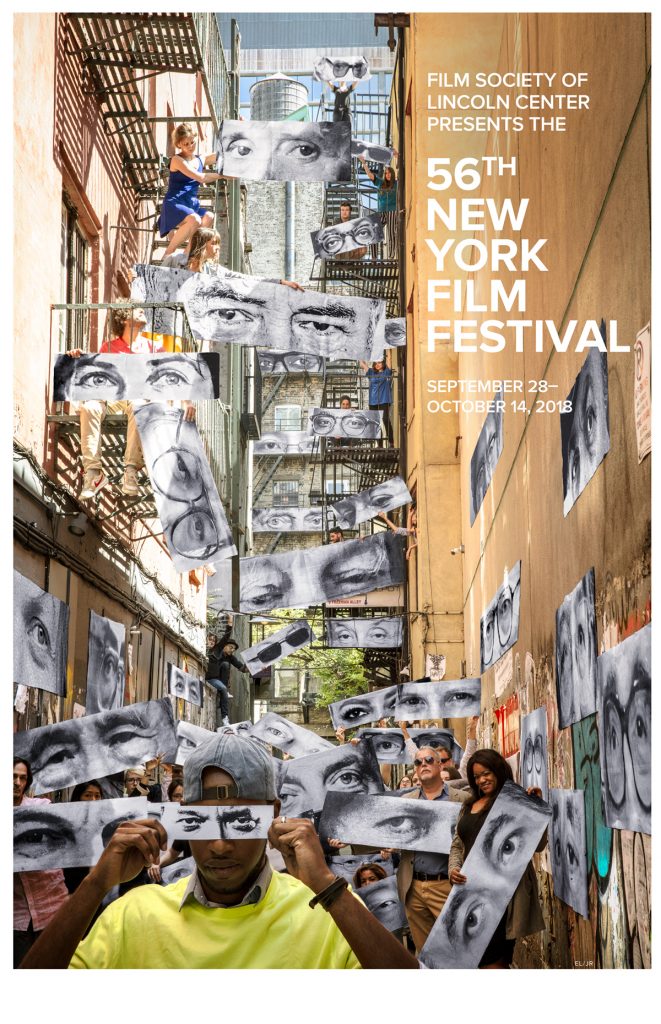 “This year’s poster came together in the best imaginable way – spontaneously, at last year’s festival,” said New York Film Festival Director Kent Jones. “Dan Stern, our board president, was talking to Ed Lachman, one of the best DPs alive, a visual artist, and a regular at the NYFF, and asked him if he had any interest in doing a poster for this year. Ed thought it over, got back to Dan, and told him that he and JR—who was at the festival with his amazing collaboration with Agnès Varda, Faces Places—had been discussing the possibility of a collaboration, and they’d agreed that the NYFF poster presented them with a great opportunity. The result is better than we could ever have imagined, a real thing of beauty, and it’s going to be a favorite.”

On the partnership and thought process behind this year’s poster, Ed Lachman explains, “Being at the Festival is the highlight of the year for me, when I’m not working. It’s a place to meet, share, and experience what cinema can be. The opportunity to create the poster for the New York Film Festival and collaborate with JR was a formidable experience and similar to filmmaking, where one works with other visual artists to create a project. I’ve had the greatest respect and admiration for his work over the years, both visually and how he engages communities he’s portraying within a social context, which I think is so important in today’s world, to find how we’re all connected, rather than separated and divided.”

According to Lachman, “The idea came together using JR’s emblematic eyes . . . What is cinema without the mind, the heart, and the eyes of the filmmakers? Using the director’s eyes can symbolize the creative force behind the images and the stories that the Festival has championed and represented to New York over the years, supported by the audience holding the placards of their eyes, and what can be more New York than our alleyways?”

Lachman’s work has garnered him numerous honors including Academy Award nominations for his work on Carol (2015) and Far from Heaven (2002), as well as an Emmy nomination for the HBO miniseries Mildred Pierce (2011). He has been honored with the American Society of Cinematographers Lifetime Achievement Award, Telluride Medallion Award, Gotham Award, and this year at Cannes with the 2018 Angenieux ExcelLens in Cinematography Award. Lachman is also known as a visual artist who has had installations, videos, and photography at the Whitney Museum of American Art, MoMA, the Ludwig Museum in Germany, and many other museums and galleries throughout the world.

JR exhibits freely in the streets of the world, catching the attention of people who are not typical museum visitors. In 2006, he created Portrait of a Generation, images of suburban “thugs” that he posted in huge formats in the bourgeois districts of Paris. In 2007, with Marco, he made Face 2 Face, large portraits of Israelis and Palestinians standing facing each other in eight Palestinian and Israeli Cities, considered the biggest illegal exhibition ever. In 2011, he received the TED Prize. Later that same year, he created Inside Out, a global participatory art project that transforms messages of personal identity into works of art. As of September 2017, over 350,000 people from more than 140 countries have participated, through mail or gigantic photo booths.

His recent projects include a collaboration with New York City Ballet; the feature documentary Faces Places, co-directed with Nouvelle Vague legend Agnès Varda; seemingly “erasing” the pyramid outside of the Louvre; giant scaffolding installations at the 2016 Rio Olympics; an exhibition on the abandoned hospital of Ellis Island; and a gigantic installation at the U.S.-Mexico border fence. As he remains anonymous and doesn’t explain his enlarged full-frame portraits, JR leaves the space empty for an encounter between the subject/protagonist and the passerby/interpreter.

A special thank you to photographers David Godlis and Julie Cunnah for their photo contributions to the poster. Chantal Akerman photo courtesy of Kenneth Saunders/The Guardian.

These limited-edition posters will be available for purchase during the festival at filmlinc.org/merch. NYFF will also be holding a contest: the person who correctly identifies the most director eyes will receive a pair of festival tickets and a signed poster. See a poster keyhere and enter the contest here. Ed Lachman will speak to NYFF audiences about the poster concept and creative process at a free NYFF Live talk during the festival, details to be announced.