Mr. GAGA, directed by Tomer Heyman, is a compelling account of the life of internationally famous Israeli choreographer and contemporary dancer, Ohad Naharin. Through vivid depiction of Naharin, we learn of the rigor and courage it can take for a human being to live an honorable life. His Gaga technique is a movement language intended to help dancers raise physical awareness by focusing on the rhythm of their bodies, letting them direct their movement and the pleasure that movement brings. Practitioners listen to their bodies.

Naharin started dancing at 22, was asked to join the prestigious Batsheva Dance Company; later on Martha Graham, the pioneer of modern dance, invited him to New York. Naharin’s very sought-after talent took him places artists dream of, yet, he always felt a need to be home. He gave up New York, the city of dreams, to return to Israel where he was to become director of the Batsheva Dance Company.

Dance, the art form of the soul, is a performing art and humans can express inner feelings, thoughts and experiences; the body expresses itself naturally and so the spirit. Yet, more often than not, dance can be filled with an intense desire to be successful, even if it means taking away the essence of the art form  – as can happen when commercial interests overpower the artistic. Not Naharin, however. 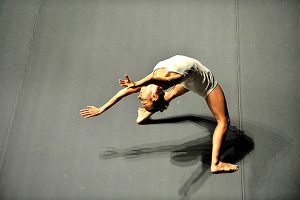 Ohad Naharin, artistic director of the Batsheva Dance Company. Regarded as one of the most important choreographers in the world. Mr. GAGA Filmed over a period of eight years.

The documentary thoroughly shows the inner battles he fought after he and his wife left New York to return to Israel. As the film focuses on his perspective as an artist and the risks he took, i.e., sacrificing relationships, starting from scratch, re-creating what dance meant for him. The audience is given a perspective not only about his personal life but also the level of difficulty, expertise and tenacity a dancer requires.

With interviews filmed in the studio during rehearsals and footage of his life through the lens of family members, viewers learn about Naharin, not just as a  choreographer and dancer but also as a human, one who grieved, lost, changed and stood up for what he believed in.

The film shows the protests inspired by the company’s resistance to the political climate present in Israel at the time, and we witness the impact Naharin exerted on the public and his dancers. He has always been an activist who believed in individual freedom and his commitment to his values are seen through his work – a rare sight as dance isn’t usually used in that regard.

Every interview, visual and sequence of the timeline of his story create a powerful and meaningful experience. It shows dance as more than just an art form – they give dance meaning and purpose that can impact society in a positive way.

WORD Entertainment Editor Anakeiry Cruz can be reached at ANAKEIRY.CRUZ48@myhunter.cuny.edu

← Photo-J Essay: Two-Hour Journey to Whethersfield, Connecticut, for Pfizer’s COVID-19 Vaccination – Pictures by Marlena Freitas
Quarantined Until Further Notice: A Photo Journalism Piece by a WORD Reporter Getting Ready for the Light at the end of the Tunnel →