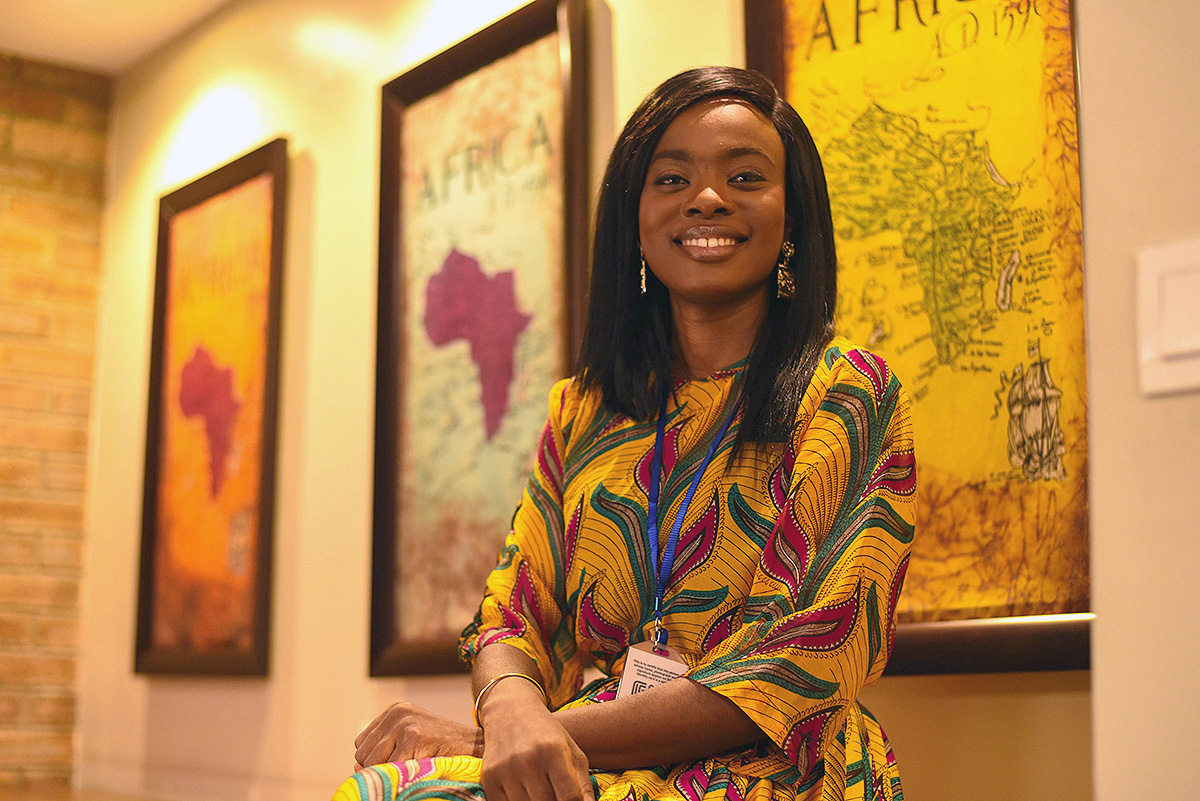 BECOMING ABIE is a six-episode Netflix dramedy featuring a Nigerian millennial, female, articulate and brainy, feisty, articulate and gorgeous, in her first job as a new hire in a topnotch Lagos advertising firm where she must learn the ropes of the business to climb the ladder of success. It  begins screening October 28.

Abie must, of course, navigate self-doubt and, of course, office politics with its land mines, sinkholes and unpredictable fickle and capricious fates. She licks her wounds as she learns from her mistakes. On the surface, there’s a familiar ring here regarding the plot and story line, and some might wonder how well the familiar ring may resonate in Netflix USA if not the rest of Netflix with its streaming in more than 30 languages and 190 countries.

First off, without a doubt – based on the first two shows I screened – ­ it’s an irresistible gem of a gem because of stellar cinematography, editing, acting, directing, script, plot, dialogue and a rhythmically lush music score. Secondly, its created, written, co-directed, and produced by Bolu Essien who also plays the lead character, Abi. [We did a Q&A.] Becoming Abi is inspired by real-world events and experiences in her life. The series’ verisimilitude resulting from those events and experiences, personal and professional, is top of the line. Nevertheless, that cinematize realism has an unmistakable touch of existential creativity.

For example, there are scenes with Abie addressing the audience directly – and they fit so smoothly without a hitch in the running cinematic narrative, adding another level of context, almost of a spiritual nature, about what the series is about. [This cinematic panache is discussed in the Q&A.]

Thirdly, Bolu Essien’s series has all the accouterments to satisfy the elemental formula for success described in old adage about success: Can this Netflix series made in Nigeria play well in Peoria. {Click here if unfamiliar with the Peoria refrain.}

The Becoming Abie series was made by Bolu Essien’s Nigerian-based production company Evolving Light Studios, which she founded alongside her husband, Emmanuel Essien, and is distributed by Nigerian distributor FilmOne.

“Abi is loosely based on my experiences, and these are experiences of over years …” – Lead actress, creator, writer, producer and co-director Bolu Essien says in an Q&A.

GWM: I reviewed the first two episode and each time I felt like I was watching a movie, not the usual Neflix TV episode streaming without commercial breaks. With each, I experienced that soulful sensation associated with watching a cinema, with a beginning, a middle and an end. 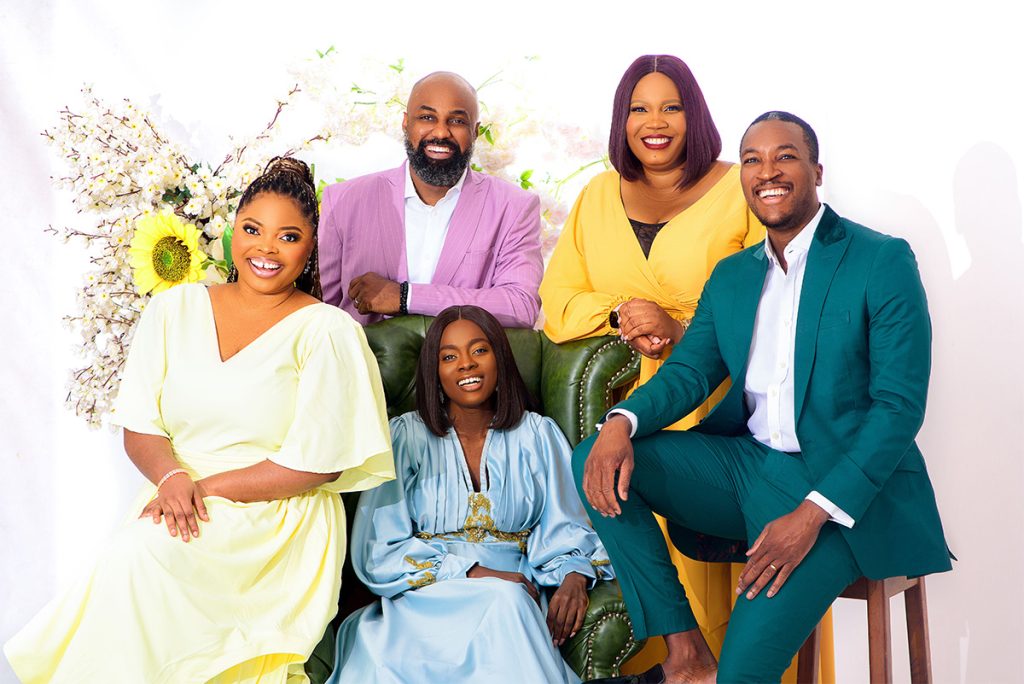 Bolu Essien (Abi) with some members of her team.

It’s like a movie and it’s broken down in episodes like for TV, but right from the beginning, when I started writing, I was clear on how I wanted each episode to be.

So, it explores the array of reality. Like I said, Becoming Abi is loosely based on my experiences, and these are experiences of over years that I have condensed, but I just wanted to make sure that I’m taking you [the audience] on a journey.

When we’re going into her love life, we go deeply into her love life. When we’re exploring when she becomes a manager and the challenges that it comes with that, we explore it deeply. But whilst going through that, you see her growing, and you see how she’s able to see herself more from the episode 1 where she doesn’t even know how creative she is, or her possibilities and who she can really be.

But by the time you get into episode five, you see a woman who has grown, still facing her challenges, but the challenges of course would vary when you are just starting your career versus when you’ve been in an organization for a couple of years.

GWM: How did you get into advertising? It [production notes] says here …

Okay, so, while I was in the university, I was part of the drama group, and I’ve always wanted to act. I will always act. That’s my first love.

And when I graduated from school, I had done two movies, but then I looked at the industry, the entertainment industry as of that time, coupled with the fact that I went to a very good school … [and she didn’t think she was ready for an entertainment career].

My parents really tried their best to send me to a good school. I studied mass communication. So, I just couldn’t take on a [entertainment] career at that time that I wasn’t sure would put food on my table, if you know what I mean. So, at that time, I started learning movie editing. I went to this small school here, started learning movie editing, but then I met a friend I’d known in the past who says, “The advertising agency where I work for is trying to hire. I work in finance. I don’t know about the process, but just come in,” and I went in for the interview.

And when I got there, of course I didn’t know what digital advertising was at that time because this was as way back as 2014. It wasn’t so big in Nigeria then. So what I did was, I just told them, “I’m creative, I can write, I’m good with coming up with concepts,” and I got hired. So, that’s how I got into advertising.

I started as a social media manager. I moved up to [inaudible] manager. So especially I moved up through the ranks [rapidly] from social media to … I became head of the agency for West Africa. Yeah, so that’s how I got into advertising. But … I always … knew I would come back to acting … back into the entertainment industry.

Again, advertising and marketing still have this level of entertainment to it because of content created: The ads we were creating for the brands … and still had the aspect of casting, models, and all of those things, digital campaigns, that we were running for brands.

So, in a sense, I was still in that world, that entertainment world, but from a corporate point of view, if you get what I mean. And so when we were coming back in, I was speaking to my partner, I said, “You know what? I know I really want to come back to the entertaining industry in 2021.” And I was like, “What a better way to come back in with a bang than with an experience I’ve had.” And I think it’s a unique story.

I don’t think workplace [stories] is something we do a lot here in Nigeria. And I know the experience that I’ve had was going to be good enough to tell a unique story.