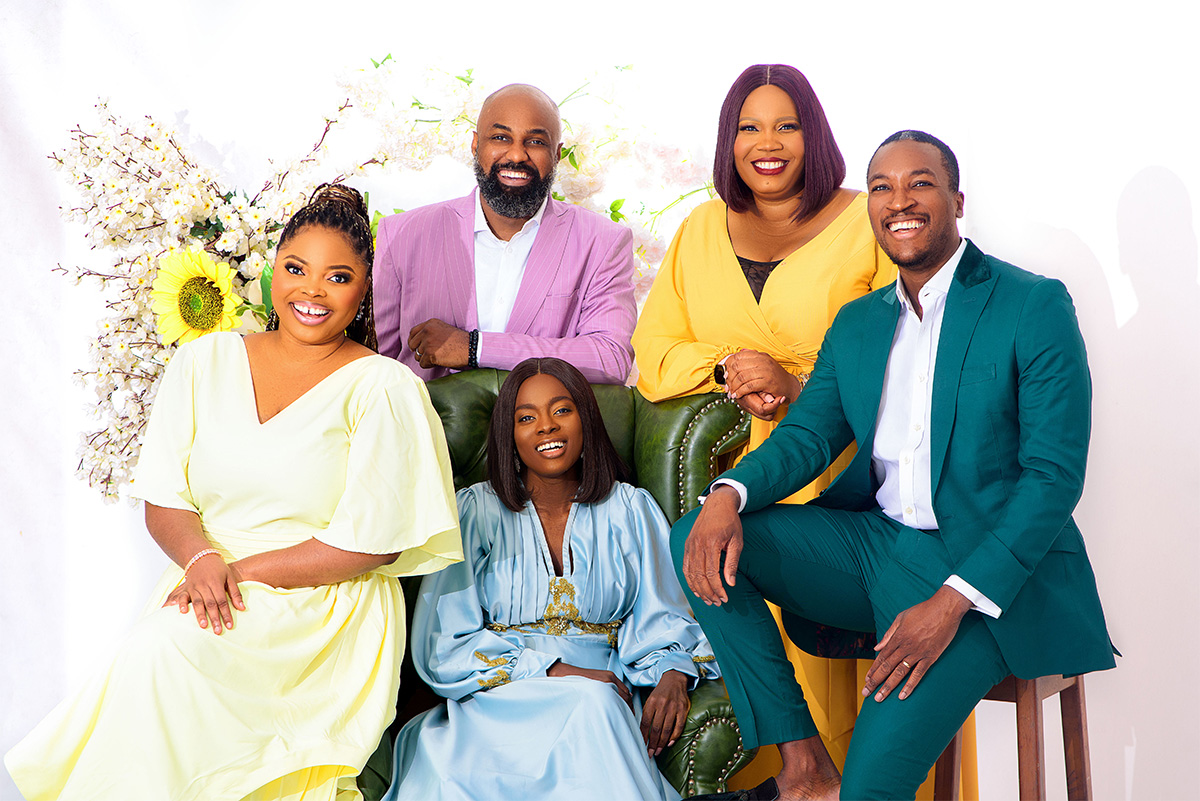 Bolu Essien (Abi), center, sitting, with members of her team.

Bolu Essien Responding to Questions about the Essence of “Becoming,” and Being Inspired and Providing Insight about the Muse(s) Inspiring Her

When you go through becoming, you find that it’s a journey. It’s a journey of becoming. That’s what I want people to take away, eventually, that when you look at where you are now, and where you’ve been … just know that you’re going to grow into becoming where you’re meant to be.

It might take challenges, it might take a lot of hard work, it might take a lot of downfalls. You will definitely have some sad times because when you watch the series, every episode doesn’t have a happy ending, if you get what I mean. There’s some of the challenges that actually really beat her [Abi] down and made her question her capacity. But overall, I want it to be that when you watch it, if you are that difficult manager, you know this is how you speak to your colleagues.

In this part of the world, in creating, either you”re known as a writer or as an actor, separate from a show creator, separate from a director. But when I watch these women and the way they tell their stories, I’m like, ‘This is what I can do. I know I’m capable of doing this,’ and, initially, when I was writing the project, I got to a point where I was almost feeling like, “Are people not going to just think I’m heaping up credits to myself,” but I’m really doing the work, I’m producing. I’m producing. I’m going with my partner to every single location to check, to be sure that it gives the vision.

So for me, I find that these women are telling their stories in the way they see, like there’s a POV from their storytelling. And I’m like, I connect to these women because this is how I want to tell my stories. I have a point of view, I have a voice, I’ve had experiences. I’m inspired by people I see around me. I’ve want to tell the stories this way. So, that’s how they inspired me.

And I’m like, if Issa Rae can get a show on HBO, Michaela Coel on BBC, HBO, and I thought, “Just go for it.”

At that time, I didn’t even know it [Becoming Abi] was going to be on Netflix. Heck, I didn’t even know it was going to be on Netflix globally. But they inspired me to think globally. So, create locally but think globally. And I think what I then did was to watch every single interview. I watched every interview of Michaela, every interview of Issa Rae. And then, as an actor, I was watching … and just soaking up all of these experiences, and they gave me that guts to create. And here we are.

In the course of the Q&A, it made sense to this interviewer to ask Bole Essien about up and coming projects.

Becoming Abi is our first major project. We shot a short film last year. We have a documentary coming out soon. It’s called Scars of Honor. It focuses on destigmatization of women who choose caesarian section as a bad option.
In Nigeria, the percentage is less than even, I think, 6 percent. While in the U.S., it’s up to [inaudible] of women who take on caesarian … options. So it’s really sad how Nigerian women are treated when they take it.

They’re actually seen as very weak, or they’re not spiritual, and everything like that. So, definitely we have a documentary coming out on that. We definitely also have a lot in the works. I was sharing with someone, I said, we do have a slate. And that’s how we do operate. We’re in the filmmakers, of course, we’re raising funds to tell these stories, but we do have a couple of series also in the works.

We do have one in the pipeline. Whilst the next one something is … I haven’t been able to share so much on it yet, but the next one to come out is a dark comedy. So, it has to do with grief and some other things that I might not be able to share now, but it’s about grief, but also funny, and what are the other issues that women experience and all of that.

But overall, while you’re watching it, you’re still getting entertained. You’re laughing … you are crying, you’re feeling for the character. And it might take one or two things, maybe in the way you relate with those kind of people whom you find in those situations. So, those are some of the things that we want really do.

The following is for my students, journalism and film, about the importance of writing regardless the media they prefer. Too many of my film colleagues don’t emphasize writing enough. So, I asked Bolu Essien …

In fact, sometimes I tell myself what my pen can write, it’s … the English that my pen is writing, You are mentally just thinking of a world that doesn’t exist to people and you are writing it down. So I tell people, writing is the extremely, most essential aspect of any creation, whether it be film, whether it be music, … even if you have artists to write, draw, they decide how they want it to be.

← Becoming Abi
A Must-See That Really Must Be Seen … Or Else!
SEXTORTION: THE HIDDEN PANIC – Apex Sexual Predators Are Stalking Our Kids Right Under Our Noses – Part 1 of 3 →