THE PRESIDENT:  Well, this is a treat for me, at the end of a long week, to be able to visit with a couple of friends, but also, I believe, American heroes.  In particular, I want to say thank you, on behalf of the American people, to Scott Kelly.

As some of you know, a while back, Scott completed what was the longest period of time that any U.S. astronaut has ever spent in space – almost a year.  And what made this so important was not just to break a record, it gave us an opportunity to learn how Scott, as an astronaut, is impacted by lengthy stay like that.  And we’ve got somebody to compare him to – his twin brother Mark, also an astronaut. 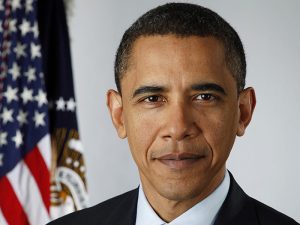 So as a consequence, what we were able to learn is how does the body adapt, what kinds of physiological impacts – psychologically, from what I understand from Scott, he was pretty good.  But all this allows us to start thinking about long-term manned space flight.

And as I announced recently, our goal – our next goal – not our ultimate goal, but our next goal is to get to Mars. And obviously, we’ve got a lot of work to do technologically to figure out how to get there, what kinds of space crafts allows us to do that most effectively.  But if we’re going to do a manned flight, then one of the keys is making sure that our astronauts who are going out into space for that long period of time are also then able to come back – what kinds of environments do we need to create for them, what are the biological sciences, and other elements that will allow for a successful mission.

So we are extraordinarily grateful to Scott for the sacrifices that he’s made.  He did all kinds of science experimenting up there that is over my head and I won’t even try to explain, but the data, the knowledge that we’ve accumulated from his incredible adventure is something that is going to serve us in good stead as we continue to accelerate and advance our forays into space.

As everybody knows, I’m a big space fan, and Charles Bolden, another ex-astronaut, along with my Chief Science Advisor, John Holdren, have been working closely with me to maximize the investments that we make, to try to encourage Congress to work with us so that that final frontier is something that continues to inspire, continues to motivate the imaginations of young people, and creates enormous spillover effects – because when we learn about space, we’re also learning about ourselves, and ultimately, we’re learning about technologies that can make a difference in terms of our day-to-day lives.

One last point I’d make is, Scott was sharing with me what the planet looks like from up above and how much of a perspective it gives on the need for us to preserve this planet.  And so I’m going to have just a couple more remarks, but I thought this would maybe be a good time, Scott, for you just to share with everybody else what you just shared with me in terms of what it means when you’re seeing day in and day out our planet Earth.

MR. SCOTT KELLY:  Well, thank you, Mr. President.  Thank you, sir, for having us here today, and thanks for supporting NASA in your new initiative for us to start really thinking hard about going to Mars.  I think that’s our next very worthy goal in space.

And what the President is referring to is, being in space for a whole year, you get this perspective of seeing the Earth through changing seasons and different lighting conditions.  And when I was in space for shorter periods of time, I would often think, well, maybe the Earth is just looking like that because it’s a weather pattern or it’s not how it always appears throughout the year.

But seeing places like China and India, and the pollution that exists there almost all the time is quite shocking.  And there was one day last summer, the summer of 2015, when I was in space I saw the eastern side of China was perfectly clear.  And I’d never seen that before in all of my time in space, and I’d spent well over a year in space, total, at that point.  And I could see all these cities that are – there’s like over 200 cities in that part of China, with over a million people.  And it was at dusk, and I could just, for the very first time, I was able to see them, and it was quite shocking.

I didn’t really understand it until the next day I heard that the Chinese government had turned off a lot of the coal-producing power plants, stopped the cars from running in that part of the country for this national holiday, and the sky had completely cleared.

So it’s interesting to see just how much of a negative impact we have on the environment, but also how quickly we can have a positive impact on it if we decide to do something – not to mention the atmosphere is very, very thin and scary-looking when you see it from space.

THE PRESIDENT:  That’s a good reminder that we need to do everything we can to preserve this place we call home.

Because of people like Scott and Mark, we are continuing to see young people inspired to get into science, math, engineering, technology – what we call STEM.  As many of you know, we’ve been really trying to emphasis STEM education, including hosting a White House Science Fair, so that the incredible achievements of our best young minds are celebrated.

At the last one, a nine-year-old budding scientist said to me, you need a kid science advisory group so that you’re getting our perspective about what’s interesting to us and how you should be thinking about teaching science and getting kids excited about science.  And then I thought, that’s why you’re smarter than me. (Laughter.)

So we, in fact, have formed a science advisory group, which is meeting as we speak.  After we finish here, we’re going to go and talk to them, because I suspect that there are going to be some of those young people in the Roosevelt Room who are going to be the ones to figure out how we not just get to Mars, but colonize Mars and go beyond.  They’re the ones who are going to figuring out these technologies.  But they will be building off the incredible work of people like Scott Kelly and Mark Kelly.

And my last point, I want to say thank you to Mark Kelly. With his wife, Gabby Giffords, they have been doing incredible work around making sure that, in addition to taking care of the planet and understanding our environment, that we’re also thinking smartly about gun safety and the preventable deaths that bring so much tragedy and hardship to so many people’s lives.

My understanding is Gabby, right now, is on a 42-day bus trip.

THE PRESIDENT:  – Bus trip, and just talking about the importance of us getting together in a bipartisan way to do something about gun safety.

And so, in addition to doing cool stuff in space, they’re also helping us think smartly about how to make our country better on a day-to-day basis.  So we’re so glad she’s doing well. We want to thank both of them.

At some other time, if you haven’t already heard, you should get some stories from Scott about what it’s like after you’ve been in space for almost a year, and then you come down and you’re walking around.  My understanding is that his head got a little larger – (laughter) – measurably so.  And we don’t just mean ego.  (Laughter.)  But apparently it’s back to normal size. I wanted to see him right away, but folks thought it might be a little scary.  (Laughter.)

All right.  Thank you, guys.

Q    Did you meet with Bill Murray?

THE PRESIDENT:  Absolutely.  He was wearing a Cubs jacket which, for a White Sox fan, is a little troubling.  (Laughter.)

Edited for publication by Gregg Morris October 23, 2016. Morris can be reached at gmorris@hunter.cuny.edu

← Remarks by President Obama on Education at Benjamin Banneker Academic High School Washington, D.C.
News Follow-Up About the Groping and Stalking of an Hunter Student →