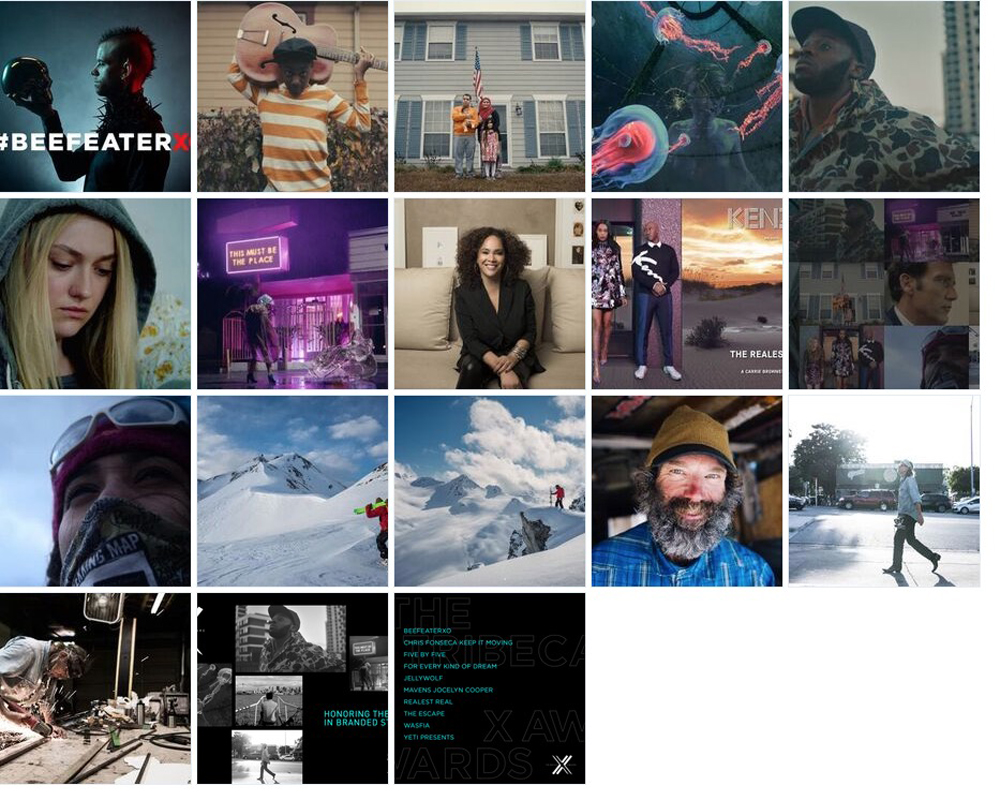 The Tribeca Film Festival  – through its in-house content studio, Atlantic Re:think – has announced the finalists for the second annual Tribeca X Award.

Ten finalists, 9 short films and 1 Virtual Reality project were selected from 600 entries representing the best in storytelling at the intersection of advertising and entertainment from the past year. The award highlights excellence in creative, original and authentic storytelling that is sponsored or underwritten by a brand.

The selected projects were created by acclaimed filmmakers in partnership with a wide-ranging array of brands, including Apple, Beefeater, BMW, CHANEL, Diageo North America, Kenzo, Red Bull, Square, Visit Seattle, and YETI Coolers. The finalists include a futuristic short film with an A-list cast and action-packed driving stunts, a VR experience of an immersive play by “La Despensa” that follows the journey of Ulysses, a short film about a deaf choreographer who experiences and shares music and dance through waves of sound, and a short film that follows a bold woman’s climb to the tops of the Seven Summits.

The selected projects can be viewed in a special section on TheAtlantic.com, created by Atlantic Re:think [theatlantic.com/sponsored/tribecax]. The winner will be announced during the Festival at a celebration and screening of the work on Monday, April 24, followed by a dinner supported by WHOSAY.

“Over the past year, branded content has grown leaps and bounds with an explosion of projects and collaborations. These finalists represent the best artist-brand pairings of the past year and demonstrate how authentic, original and creative storytelling truly rises above the rest,” Andrew Essex, CEO of Tribeca Enterprises was quoted as saying in a TFF press released.

“Having partnered with some of the world’s most creative brands, Atlantic Re:think is an established arbiter of standout branded content,” said Hayley Romer, SVP and Publisher of The Atlantic. “It’s exciting to now have the opportunity to celebrate the best of the best across the industry – and bring this work to our audience, which has long embraced and engaged with brand storytelling.”

Eligible projects included scripted and documentary work for film, TV, digital, social, and virtual reality and/or augmented reality, in both feature and short length. The winner will be chosen by a jury that includes Joanna Coles, CCO at Hearst; Jae Goodman, CCO and Co-Head of Marketing of CAA; Tim & Eric (Comedy Duo) and Directors at PRETTYBIRD, Founders of Abso Lutely; Jenna Lyons, President and Creative Director of J.Crew; Eli Pariser, CEO of Upworthy; and a proprietary A.I. solution developed by Celtra, providing quantitative creative analysis based on performance data and insights from hundreds-of-thousands of video advertising campaigns powered by Celtra’s creative management platform.

BeefeaterXO
Brand: Beefeater
Directed by Jesús Hernandez
– BeefeaterXO is an interactive experience inside the creative mind of the 3-Michelin-starred chef Dabiz Muñoz, where the viewer travels through 4 different cities in order to find the secrets behind the most avant-garde cocktails ever made.

Chris Fonseca: Keep It Moving
Brand: Diageo North America
Directed by Zachary Heinzerling
– Deaf people are anything but disabled, and this film featuring the real story of deaf dancer Chris Fonseca proves it. Born profoundly deaf, Chris challenges the perceptions of disability as a social barrier by teaching his deaf students how to express themselves on the dance floor, inspiring self-confidence within them and pure awe in all of us.

The Escape
Brand: BMW
Directed by Neill Blomkamp
– BMW Films were a groundbreaking series of eight short, online films released in 2001, starring Clive Owen as an enigmatic driver for hire who used a BMW for his thrilling exploits. To celebrate the film’s 15th anniversary, “The Escape” is a modern homage to the originals, with Clive Owen reprising his role as the driver and also starring Jon Bernthal and Dakota Fanning.

Five by Five
Brand: Visit Seattle
Directed by Terence Nance, Martha Stephens, Clea DuVall, Drew Christie and Ian Cheney
– Five films by Five Filmmakers each exploring and celebrating Seattle through the lens of one of the five senses. Each film was conceived and directed by a celebrated independent filmmaker. The films cross genres including documentary, experimental, animation and scripted.

For Every Kind of Dream: Yassin Falafel
Brand: Square
Directed by Mohammad Gorjestani
– Yassin Terou fled Syria with a suitcase and a few hundred dollars. He knew no one in Knoxville, Tennessee, and he spoke no English, but he went there to rebuild his life and pursue his dream of perfect falafel anyway. Every business starts with a dream, and Square exists to serve them—every kind of dream. “Yassin Falafel” is Square’s first short film chronicling their remarkable sellers and their tireless pursuit of their dreams.

JellyWolf
Brand: CHANEL
Directed by Alma Har’el
– JellyWolf is a feminine-spiritual coming of age story told through notes of scent. CHANEL N°5 L’Eau speaks to a new woman, who are often portrayed as beautiful creatures whose only desire is to be desired. This film is to inspire young women to remember their voice and to see each other.

Mavens: Jocelyn Cooper
Brand: Red Bull
Directed by Salima Koroma
– Jocelyn Cooper left the top of music industry to start a movement. She is a partner in AFROPUNK, a festival that unifies people through music, film, skate, and art. She inspires perseverance and empowers an underserved population, and that’s what makes her of a true maven.

The Realest Real
Brand: Kenzo
Directed by Carrie Brownstein
– With social media ever more present in our lives, blurring the barriers between ordinary and instafamous, Kenzo invited writer and Director Carrie Brownstein to take a look at the invisible digital walls that separate us from our favorite stars, and the curious conceit of a dream come true.

Wasfia
Brand: Apple
Directed by Sean Kusanagi
– As the first Bangladeshi to scale the Seven Summits, Wasfia Nazreen doesn’t just climb for the thrill; she climbs for the women of her country. Lyrical and poetic, this short documentary explores what it means to pursue the unknown.

Yeti Presents
Brand: YETI Coolers
John Shocklee: A Fairy Tale
Directed by Ryan Heffernan and Grayson Schaffer
– Refusing to act his age has worked out well for John Shocklee. The 52 year old has devoted his life to doing what he loves. Powered by old school hip hop and fresh powder, Shocklee makes turns down untamed slopes with the freedom of a man half his age.

Soul of a City
Directed by Berndt Mader
– Austin, TX has a rich artistic history sometimes not seen in a sea of new residents. Neon artist Evan Voyles represents the inventive spirit that makes Austin a creative haven, and his work continues to light up landmarks across our capital city.

Tribeca X Award
A juried award for storytelling supported by a brand recognizing the intersection of advertising and entertainment. The Tribeca X Award is open to all work produced between January 2016 and March 2017 funded with support of a brand in collaboration with artists or filmmakers. The top projects will be highlighted by the Tribeca Film Festival, and a jury will award the winning selection at the Festival.

Eligible projects included scripted and documentary work for film, TV, digital, social, and VR/AR, in both feature or short length that were funded with support of a brand in collaboration with artists or filmmakers. Submitted projects must have had a storytelling element; projects that are strictly intended as commercial spots were not considered.

Also available for purchase now is The Hudson Pass, an all access pass to screenings and talks taking place at BMCC, Regal, Cinepolis Chelsea, and SVA as well as full access to all events at the Festival Hub at Spring Studios, which includes VR and immersive projects, special screenings with music performances, and access to the lounges.

The 2017 Festival will offer ticket discounts on general screenings and Tribeca Talks panels for students, seniors and select downtown Manhattan residents. Discounted tickets are available at Ticket Outlet locations only.

About the Tribeca Film Festival

The Tribeca Film Festival is a cultural event for the new age of storytelling that brings together visionaries across industries and diverse audiences. It celebrates the power of storytelling in a variety of forms – from film to TV, VR to online work, and music to gaming. As a platform for creative expression, independent filmmaking, and immersive entertainment, Tribeca champions emerging and established voices, discovers award-winning filmmakers and creators, curates innovative experiences, and introduces new technology and ideas through premieres, exhibitions, talks, and live performances.

The Festival was founded by Robert De Niro, Jane Rosenthal and Craig Hatkoff in 2001 to spur the economic and cultural revitalization of lower Manhattan following the attacks on the World Trade Center. With strong roots in independent film, the annual event has evolved into a destination for creativity, reimagines the cinematic experience, and explores how art can unite communities.