Two Hunter student staff members whose jobs require them to check visitors in and out of the Hunter weightlifting room in the subterranean sportsplex of the West Building, and two students who said they regularly use the room were interviewed for their opinions about the colleges recreational services which are free.

Staffer Khai Tran said he liked his job because he has made friends during his working period, but staffer Ellyn Valdellon said she wasn’t really into her job because odd things happen when she works her shift.

Tyrone Johnson, a psychology major, works out for body building contests, and Gary Li, a computer science major, works out because he plans to enlist in the military. Hunter Recreation consists of the Recreation Sportsplex at the 68th Street campus and a similar sports workout place at the Brookdale campus in lower Manhattan. The Hunter campus provides group fitness classes, such as yoga, Zumba and hip-hop dance. 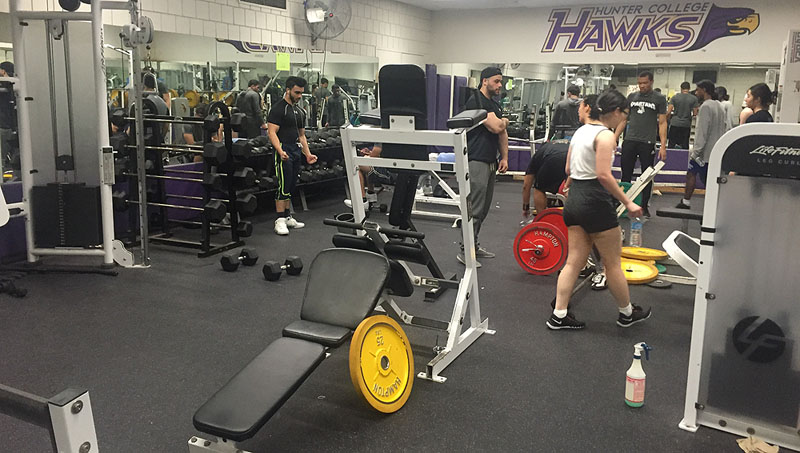 The Hunter gym is one of the most popular spots for students, faculty and staff. It is located in a windowless lower level on the B2 level of the West Building. It is a tiny, cramped space that has just enough room for people to stretch their bodies.

This reporter, who studies general media studies, is a junior who is a fan of the gym, and visits three or four times a week at night because there is no extra charge for students, staff and faculty. There are six treadmills, but only four were working this spring semester There are not enough open hours and the gym sometimes closes without notification.

Tran, 27, a psychology major and senior, who lives in Woodside, Queens, said he has worked for Hunter Recreation for two years. Interviewed in the swimming pool of the North Building C level, March 18th, and wearing beanie, staff shirt, sweat pants and Nike running shoes, he said that he worked in many places of Hunter Recreation as a staffer. This semester he worked in the swimming pool.

He said the rush hour for the pool was between noon and 2 p.m. and that people swim for about 30 minutes to an hour. He said he once saw a guy who injured himself playing volleyball one year ago. He said that he dreamed of becoming a professional runner when he was around 20, but his legs were injured and that stopped his career, so he can feel empathy for people who injured themselves while enjoying sports.

Valdallon, 20, a sophomore geography major who lives in Forest Hill, Queens, said she just started working in Hunter Recreation this semester. Interviewed in the tennis court of the West Building, and wearing a staff shirt, blue jeans and Vans shoes, she said that the rush hour in the tennis court occurs after noon.

Johnson, 22, a junior, who lives in Bronx, said that he started to work out when he was 18 and that he can stay about three hours in the gym. Interviewed in the front desk of the gym on the West Building, and wearing polo shirt, dark blue jeans and Jordan 11 black and red, he said that he went to the campus’s gym five times a week and that he sometimes went to a Blink Fitness Center in his neighborhood for convenience. 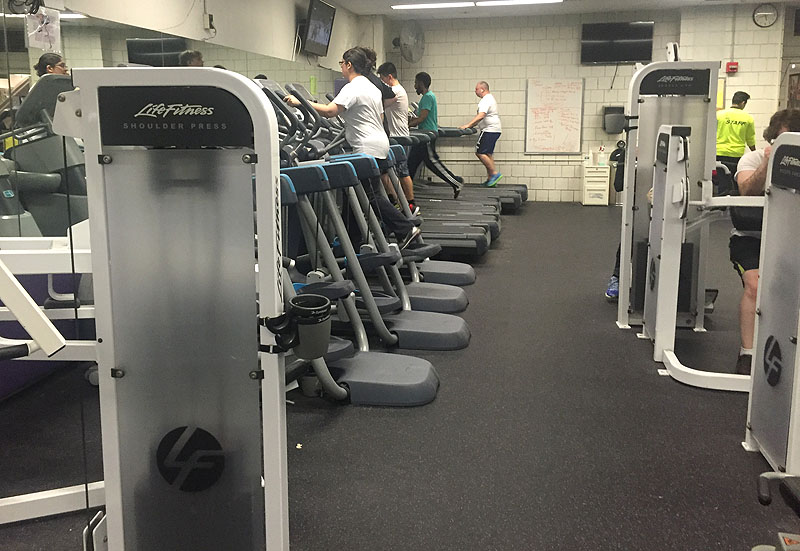 Hunter, he said, does not have good equipment and that the gyms is small compared to gyms off campus. For example, he said that there were not enough benches for bench pressing, not enough weights and some equipment was broken. Time was also very limited, not enough hours for students, he said.

He recalled witness a fight in a Blink gym when a male staffer fought with a female member. The staffer was moving too slow to swipe the female member in, so she spat in his face, and the staffer retaliated, throwing water from a water bottle in her face. She swung at him and a fight broke out.

He said that he does not go to the gym to socialize, but only to work out so he can compete in body building contests.

Li, 20, a sophomore who lives in Lower East Side of Manhattan, was interviewed in the male locker room of the gym. Li, wearing brown corduroy pants with blue button shirt and dress shoes, said he started to go to a gym when he was 16 because his brother encouraged him and sometimes he did some simple workouts at home like pushes up when he did not have time for gym.

He said that he liked to go to gym because he wanted to join the military airborne. He said that working out could make him more competitive for the army and that running especially helped him to prepare.

WORD Classifieds
Pictures by Michael Mei
Michael Mei can be contacted at michaelmei1995@gmail.com