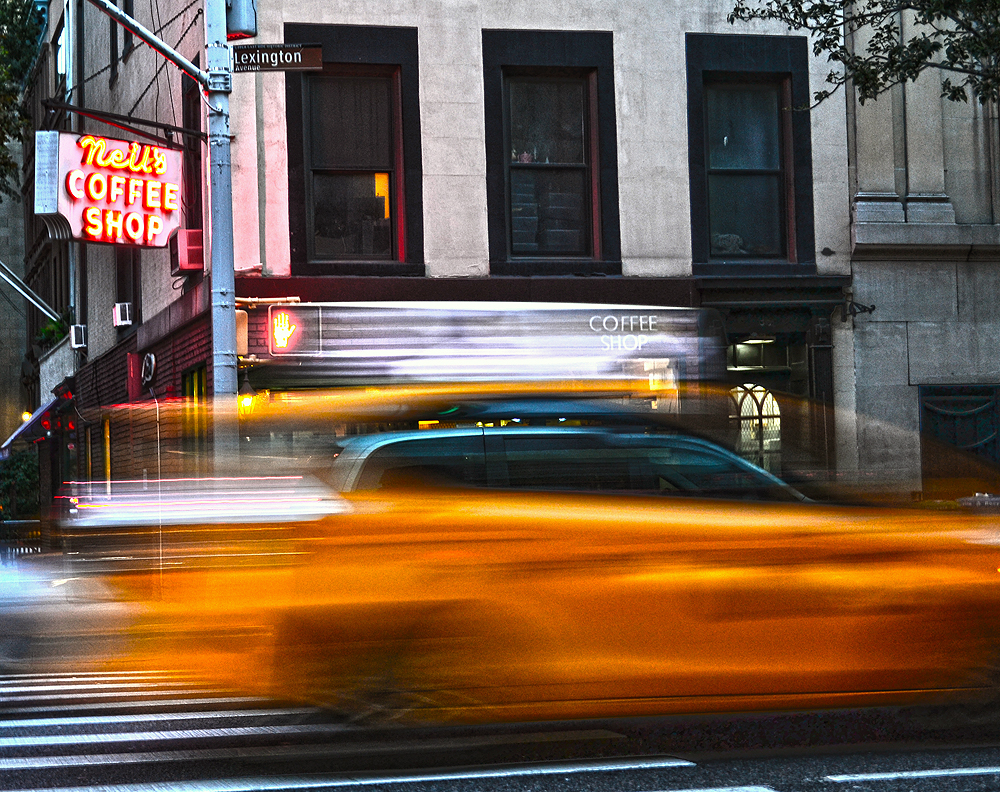 Neil’s Coffee Shop is a vintage, classic diner on East 70th Street and Lexington Avenue located on a stretch of the Upper East Side Historic District. Its red neon blade signage is eye candy in the posh neighborhood of classic brownstones. More vintage artifacts are inside, such as a 1950 Jadeite Green Hamilton Beach triple-head milkshake mixer, vinyl maroon bar stools, signed photographs of famous people and a beige cash register. Neil’s has been offering its patrons classic diner selections for 37 years, but recently added a lot of healthier options to cater to the demands of its customers, especially Hunter students.

New York’s classic diners have been fading from the culinary scene in recent years. New York Times reporter George Blecher, in an article, More Than Coffee: New York’s Vanishing Culture, wrote that The Lyric Diner in Gramercy and Brooklyn’s Del Rio closed in 2016 and the La Parisienne and Market Diner closed in 2015. All served New York for more than 40 years. Luckily for its patrons, Neil’s Coffee Shop is still robust. Its door first opened in 1940, and the business 40 years later was sold to Cristo Kaloudis, 80, an immigrant from the island of Chios in Greece. Now, he’s retired, and his son, Nicholas Kaloudis, 45, runs the business.

Around 6 p.m. on October 18, 2017, Wednesday, a day of medium volume foot traffic at the diner, considering it was a weeknight, Nicholas Kaloudis was tending to a customer by the vintage, beige cash register, and told this reporter to sit at the second booth, while he finished up. At the time of interview, Kaloudis was wearing a pastel orange Ralph Lauren shirt, pair of blue jeans, black sneakers, chrome watch, and silver necklace with a cross pendant. He is single, living in Whitestone, Queens, and has one older sister, married and with two children.

Since the age of 14, Kaloudis came to the diner with his father during weekends, and when he was in college studying biology at NYU, he worked as a part-time waiter for four days a week for four years. “I have a thirst for promoting and continuing what he’s done for the last 37 years here at the diner,” he said. “And right now, I don’t know for how many years, I want to be involved with people through this diner, by being of service, to make the people smile, make them happy by giving them good quality food in a very intimate and cozy setting.” 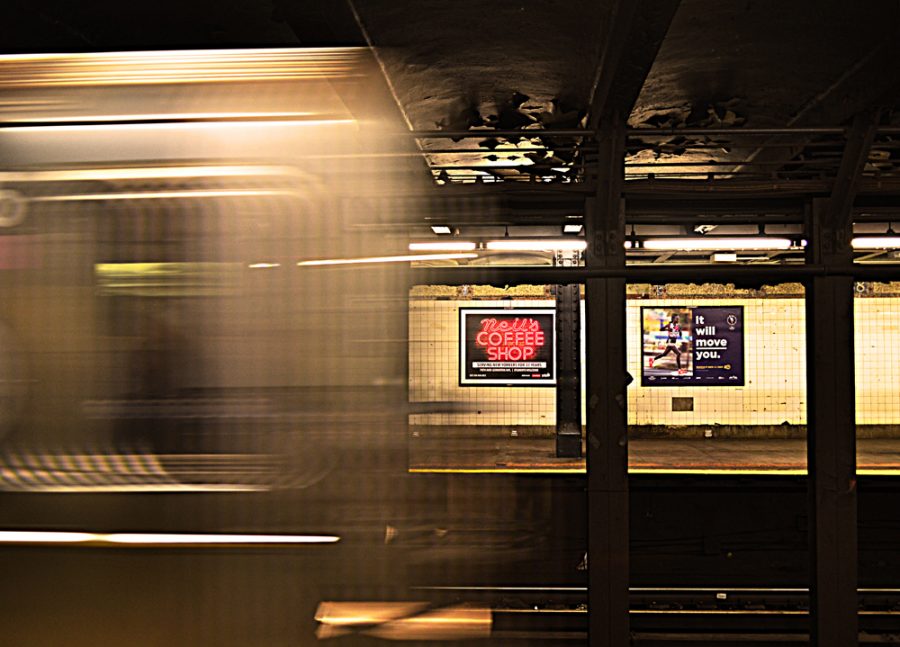 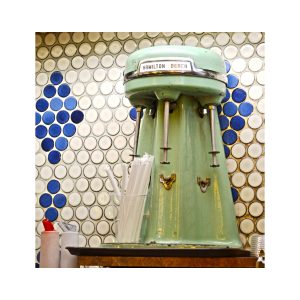 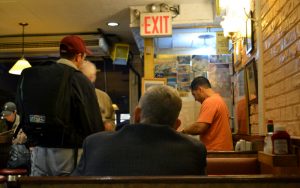 Kaloudis said he made improvements starting with the menu. The customers had spoken and he listened. Neil’s now offers kale and avocado on the menu as well as power juices and smoothies, and a few of the other healthier options that customers requested. He also revamped the menu by incorporating the colors of the diner: Maroon, yellow, and red, and used vintage font scheme along with a few imageries, mirroring the vintage old school diner vibe that the diner offers.

Neil’s wants to make the experience of the customers more intimate. Kaloudis said he was proud of his staff because they know the regulars by first names, their families and even personal information. The goal is to offer not only good quality food, but also establish a relationship in a cozy and intimate diner, he said.

Sky-rocketing rent is a pox on small businesses. Another New York Diner Turns Off the Grill, a Victim of Rising Rents, by New York Times reporter Remy Tumin, describes the plight of John Vasilopoulos and Nick Tragaras whose Cup & Saucer near Chinatown shut down in 2017. Vasilopoulos and Tragaras owned the restaurant since 1988, but Cup & Saucer had occupied the space since the early 1940s. They decided that they couldn’t afford the $8,200 monthly rent increase of $7,600 per month.

Kaloudis said he reluctantly increased prices because the diner had to be competitive with other food establishments in the neighborhood, such as Hunter Delicatessen, Eat Here Now, and Pastafina Pizzeria. He also said he believed that a slight increase in prices wouldn’t hurt but too much could turn off customers. For example, not too long ago, Olive Garden lost customers due to a $1 soup price hike, according to New York Post Tonya Garcia in her article, Olive Garden says $1 Price Hike on Soup Drove Away Customers. Although prices in rent and commodities have increased, Neil’s still offers 10 percent discount to some of its neighbors such as Hunter College, New York School of Interior Design,  Marymount Manhattan College students and faculty, and a few others with, of course, proper identification.

During the interview, Kaloudis excused himself to ring up a customer, Bill, who taxied to Neil’s Coffee Shop just to order an Alpine Swiss Burger. “I took an Uber from Chelsea to here just to have my burger and now I’m heading back home; it feels good to come back after 14 years.” 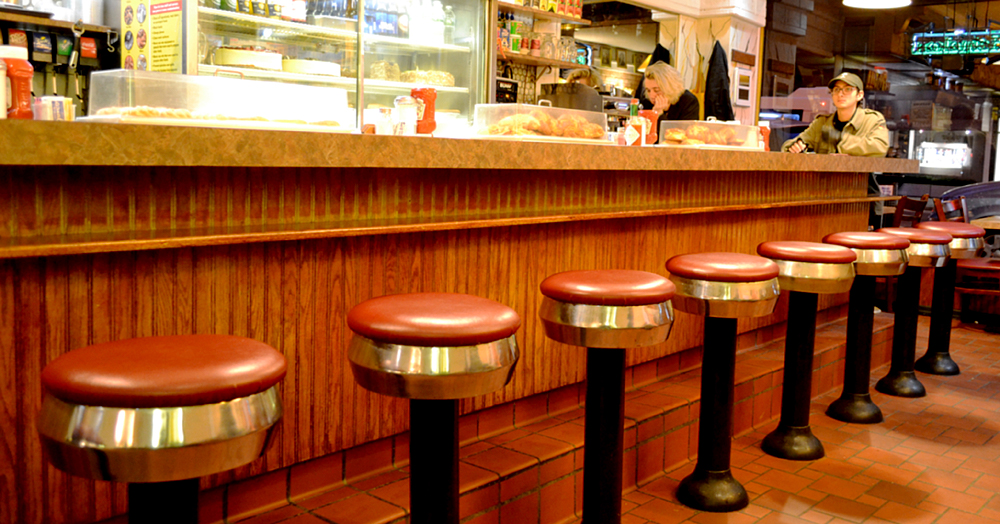 Around the busy hour of 1 p.m. on a Saturday, waiter, Gerry Franzies, 60, Greek, who lives in Bayside, described his job. He wore a white button down long sleeve shirt with a black vest on it, a pair of dark navy blue pants, a pair of black leather shoes, and was holding a pen in his right hand and a small receipt pad in his left hand. Franzies has been with Neil’s for a year and a half. He has worked in other restaurants before working at Neil’s. He said weekends are always busy from 11 a.m. until 1 p.m. and mostly families and tourists come in to dine during this time. “Neil’s is a nice place to work, people are friendly. I also like the location of the place,” he said.

Omar Martinez, 42, married, with one daughter and a grandson, and who lives in Brooklyn, has been with Neil’s for 10 years. He started as a part-time waiter, eventually became full time. He described Neil’s as a good place to work and that the employees are cool and that the older Kaloudis was a good boss. Before Neil’s Coffee Shop, he worked at 79th street and Madison Avenue as a waiter for five years then opened a business with a partner after leaving the company. According to Martinez, the relationship with his partner ended after two years because of irreconcilable differences.

After two weeks without work, he met Cristo Kaloudis at Neil’s and got the job. Martinez now works directly with the younger Kaloudis. “He’s very good. He’s like a friend and not a manager. He does not scream at his employees,” he said. He also said that since Kaloudis took over, sales increased at least 10 percent his first two months. He has known Kaloudis for two years now as a friend outside of work, but only a couple of months as a manager.

Henrri Guillen, 22, a Hunter senior majoring in music, who lives in Huntington, Long Island, eats lunch at the diner every Wednesday. Guillen plays a classical guitar and had just finished one of his concerts before heading to Neil’s for the interview.  At the time of interview, he wore a maroon jacket, a pair of light washed blue jeans, a pair of red Vans classic sneakers, and had a red backpack. Guillen, an immigrant from El Salvador, said he prefers a California wrap with coffee. 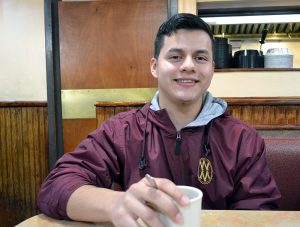 Guillen likes the interior of the diner. “I always liked the booths and what I especially like about this one is that all the picture frames in there (he points up to the walls). I see that a lot of them are signed,” he said. He recalled the time when he was having lunch with a friend and Cristo Kaloudis joined them at the table to chat, then a lady came up to Kaloudis telling him that one of the photos hanging on the wall was the type of photography that her boyfriend loves. She offered $100 for the photograph of a ballerina, but Kaloudis gave it to her for free.

Guillen admires Kaloudis whom he described as great, humble, and soft spoken. “To me, he reminds me a lot of my grandpa. Whenever I come in here, I would always start talking to him, he’d ask me about how I’m doing with school, about my career, and my progress with work. And then sooner or later we’ll always get to [like] where he would give me life advice,” he said. “I would recommend this place because I think they have great food, they have [really] friendly staff, and honestly, I feel like it’s a really great place where you can come and meet people and you can talk to them; it’s like when I come here with friends, we usually end up staying for a while,” Guillen said.

This reporter enjoys Neil’s food and appreciates its cozy ambiance and warm staff. It’s like coming home to family after a long day from work and school, and the stress level drops the moment I step inside to be seated. 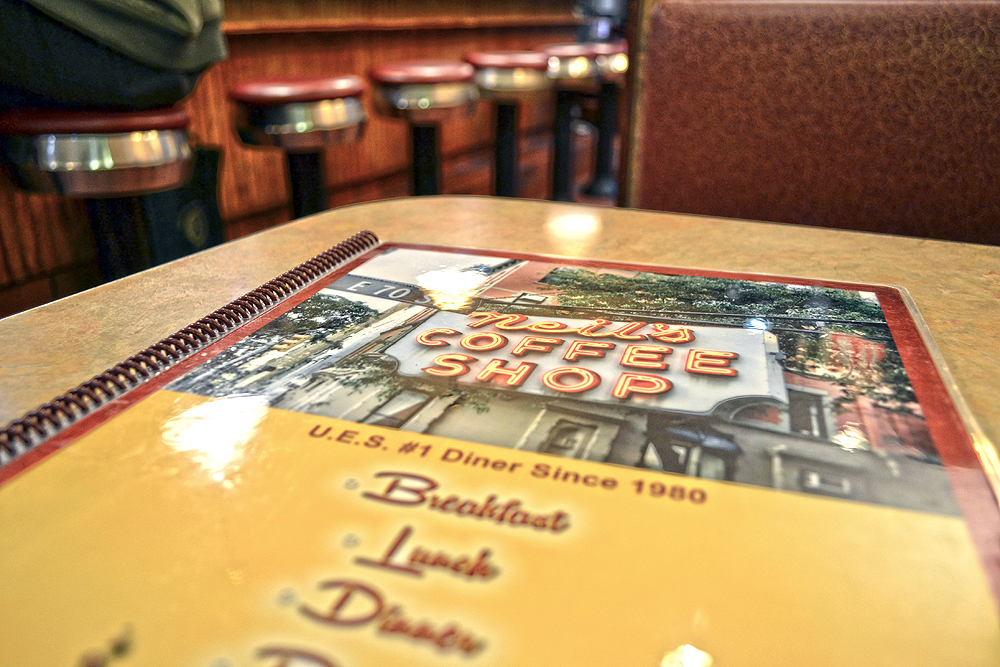 Kristine Vivar can be reached at kristine.vivar76@myhunter.cuny.edu