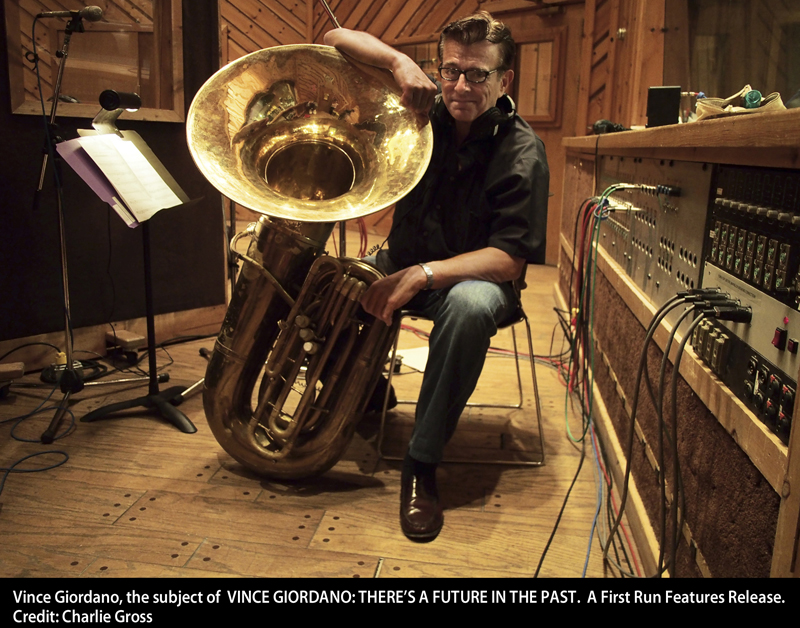 It opens this Friday, January 13, at the Cinema Village – one week only – and below are reasons to get tickets ASAP. This goes even for devotees and aficionados who worship at the altar of the band’s regular gigs at New York’s Iguana lounge every Monday and Tuesday from 8 p.m. to 11 on West 54th Street.

Co-directors Davidson and Edwards, with a surfeit of picture-perfect, scenes, syncopated and straight ahead narrative, and with truly imaginative flourishes, tell a compelling story about Nighthawks big band leader Vince Giordano whose intensity and passion for great jazz music from long ago is trenchantly communicated throughout the movie. Despite the virtuoso cinematic pleasures that can make audience members swoon even if they may not be into vintage jazz, VINCE GIORDANO – THERE’S A FUTURE IN THE PAST has a melancholic undertone. 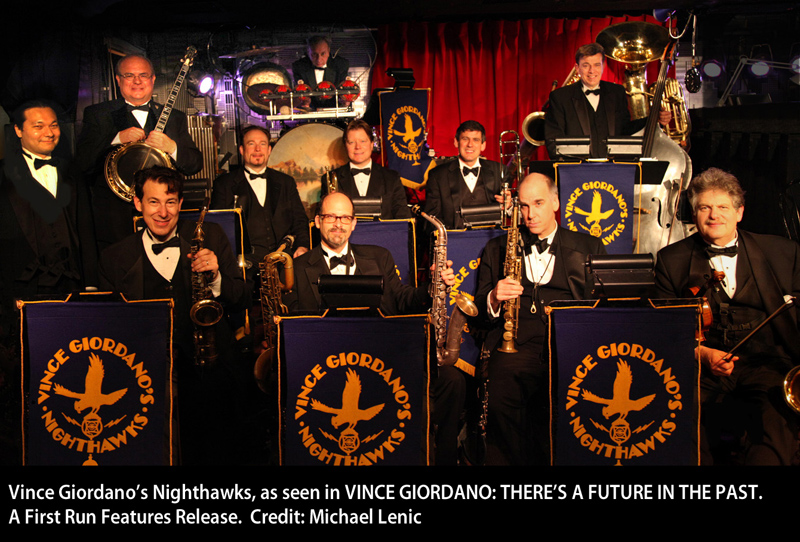 Giordano and his Nighthawks transcend time but time is a nemesis and an ubiquitous stalker. “You play so many instruments,” a Downbeat reviewer said to Giordano in an interview. “What’s your main instrument.”

“The telephone, lining up work. Being a band leader is like herding cats and putting out little brush fires,” Giordano responded.

He’s been doing that for more than 30 years, according to several reviewers and writers, shutting down, recuperating, rising up like an indomitable Phoenix. Vince Giordano is driven not only to keep his band thriving in a cosmopolitan metropolis where pop music and pop culture reign but also to keep vintage jazz alive.

There were scenic shots that had this reviewer gasping. I won’t identify which ones, I don’t want to spoil those “gasping” scenes for potential audiences. Cosmic and kaleidoscopic flourishes made this reviewer feel as if he should be in the clubs and ballrooms and on the dance floors and live at the interviews show in this movie. The imaginative angles and scenes make it appear that co-directors, co-cinematographers Davidson and Edwards were incredibly omnipresent at the right times and moments. 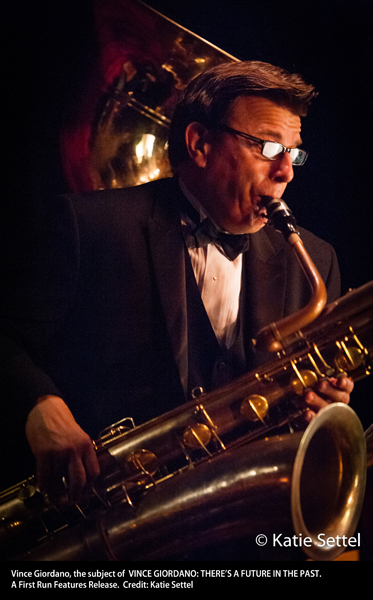 Ballroom dancing couples sway and groove with fervor. Scenes of individual interviews of Giordano’s band members talking about their personal experiences and commitments to big band 1920s, 1930s jazz and to Giordano are some of the best documentary interviews I’ve seen in a long time.

By that I mean, that interviews in documentaries can often slow down the narrative pace for this reviewer even in good films.Talking heads Q&A’s may be informative but often a little drab and dry, sans the passion and emotion audiences will experience watching this movie. The interviews are not moments to tune out waiting for the next interesting scene.

What’s not visualize in this movie – I’m exaggerating for effect – is what I imagine to be a daily regimen of Giordano popping vitamins and energy pills and lifting weights for the stamina he needs to be band leader historian, scholar and collector of vintage jazz memorabilia, who wants to keep this music as alive and vivid as long as he can.

As band leader, he is responsible for regular, good paying gigs in a competitive, metropolitan market where even good and great modern jazz can be difficult to sustain. Giordano has a herculean task of not just dealing with talented but independent thinking musicians. He must, as several reviewers and writers noted in their artices, schlepp around 400 pounds of musical equipment that has to be delivered at every gig. The filmmakers captured the essence of that labor.

Vince Giordano has produced considerable vintage music for movies by Woody Allen, Francis Ford Coppola and Martin Scorcese, just to name a few. He won a Grammy Award for the period-defining hot jazz soundtrack for the acclaimed HBO series, Boardwalk Empire. Co-director Amber Edwards told a writer that Giordano not only played “her first wedding,” but that Edwards even sang with the band subsequently, such as on Giordano’s CD Grammmy-winner, Boardwalk Empire Volume 1.

Edwards was also quoted as saying,“Our first shoot was in August 2012 at the Newport Jazz Festival, which was an amazing scene. I thought I knew Vince, but seeing up close the fragility of what he has put together, how it’s really one guy carrying this whole heavy load, stunned me. One misstep and there’s no-one to pick up the pieces. Except for Carol.”

Carol Hughes, according to press notes, is the unsung heroine of this documentary and of Giordano’s life and career. Onscreen and off, Hughes is everywhere, managing everything that Vince himself is not handling.

Dave Davidson (Director, Producer) and Amber Edwards (Director/Producer) are the principal partners at Hudson West Productions, a not-for-profit independent production company that has, for nearly 30 years, created documentaries about history, culture, music, art, and education. Founded in 1985, Hudson West’s mission is to fill in the cultural and historical gaps left by commercial media by preserving, interpreting, and presenting unique but overlooked narratives to a wide audience.

Collectively, they have created more than 17 hours of national PBS programming, including nine episodes of the award-winning series Michael Feinstein’s American Songbook (2010-2013;) A Place Out of Time: The Bordentown School (2010, Christopher Award;) Words and Music by Jerry Herman (2008;) George Segal: American Still Life (2001;) Against the Odds: Artists of the Harlem Renaissance (1994;) Vladimir Feltsman—Journey from Home (1993;) The Dancing Man—Peg Leg Bates (1992;) and Cissy Houston: Sweet Inspiration (1988.)

Grammy-winner Vince Giordano and the Nighthawks have played in New York nightclubs, appeared in films (THE COTTON CLUB, THE AVIATOR, FINDING FORRESTER, REVOLUTIONARY ROAD and HBO’s Boardwalk Empire as well as for  concerts at the Town Hall, Jazz at Lincoln Center and the Newport Jazz Festival.