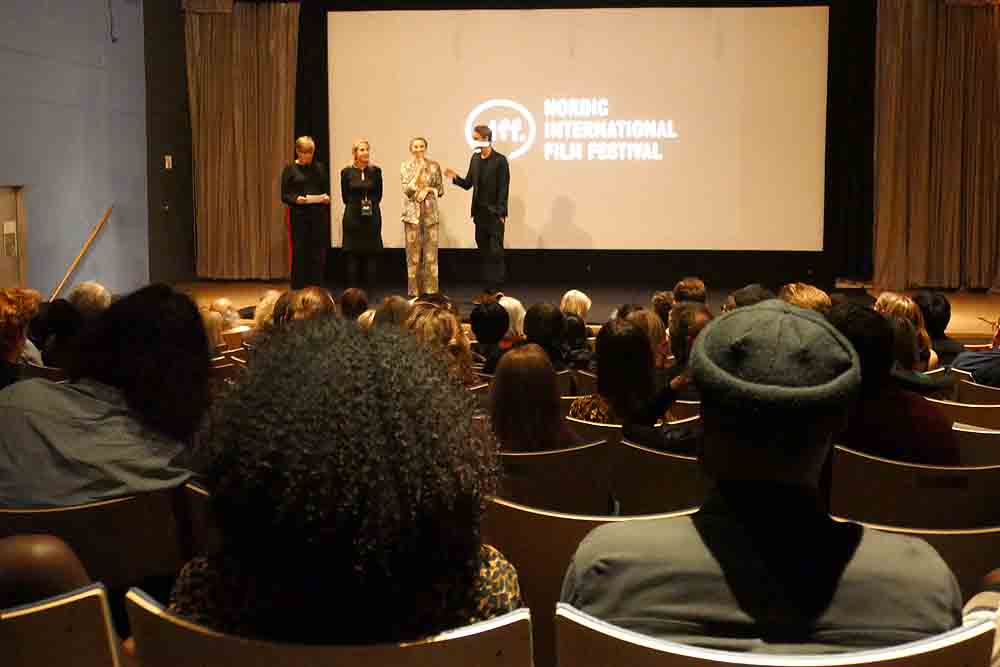 Thought the review should begin with succinct comments of praise for the film – before I cut to the chase.

A love triangle featuring the trophy girlfriend of a petty drug lord, caught up in a web of luxury and violence in a modern dark gangster tale set in the beautiful port city of Bodrum on the Turkish Riviera” – IMDB.

Devastating Danish Drama Has the Most Unsettling Rape Scene Since ‘Irreversible’ — IndieWire.com

Like a crafty predator, the Danish knock-out HOLIDAY lays patiently in wait as long as it needs to — in this case nearly an hour — before stunning its prey, the spectator, with a shocking scene that catapults the film to a whole different level – The Hollywood Reporter.

In the video below, stage left, Ambassador Anne Dorte Riggelsen, Consulate General (Denmark), warns the audience to be prepared to be diabolically disturbed at what they are going to see. She didn’t use the word “diabolically” but I believe it’s an appropriate paraphrase of what she said. She also says the film is revelatory about the dark side of Nordic nations. A foretelling of Director Isabella Eklof’s denouement?

Just how unusual is that at a screening? And from a big government official?

I know a lot about the dark side of American society. I had what would be considered a normal working class upbringing: I grew up in neighborhoods where friends, neighbors were slain, shot, attacked and under siege before they reach adulthood. As a journalist, reporter and author, I interviewed kids (most from middle-class families) who fatally shot, stabbed and bludgeoned parents (and sometimes sisters and brothers and aunts and uncles), and inmates – almost all from America’s underclass – sentenced to death row when they weren’t old enough to be enrolled in middle school.

The United States has greatest crop of serial killers per capital than any other country in the world, and I believe that reality must be appreciated if one wants to understand the dark side of America. [I think but can’t prove – and wouldn’t waste time trying to argue – that President Donald Trump understands this better than any elected president in American history.]

To make up for a lack of a medical degree, I’ve studied manuals of the Diagnostic and Statistical Manual of Mental Disorders and medical texts to sharpen as much as possible my understanding the depths of mental illness, especially about sociopathy and psychopathy, and, without too much exaggeration, to understand the actions of humans more horrific than any of the fictionalized things that go bump in the night.  That research makes me conversant in contacts with psychologists and psychiatrists – the good, the bad and the ugly – for really good interviews.

Cutting to the chase, the sexual violence scenes committed against women in THE ACCUSED (2008), THE GIRL WITH THE DRAGON TATTOO (2009), and STRAW DOGS (1971) are incredibly brutal, realistic and disturbing; the subplots of the films are pretty much in tandem with societal norms: Women are at risk from the time they are born.

The vicious sex scene in HOLIDAY – it was more weird than vicious – doesn’t come close to the terror, rage, righteous rage, prurience and salaciousness of those three movies. HOLIDAY’S purportedly licentious pièce de résistance was as moving to watch as observing an auto repair mechanic replace spark plugs.

If there was a rating system, say Movie Cringe Factor, as there are rating systems for movies, I would rate Holiday’s scene on a scale from one to five, 1 star for cringing-ness, two stars, perhaps, because it was weird.

What to say about the rest of the movie? The first 50 minutes or seemed interminably long but my eyes stayed glued to the screen.

Eyes glued to the screen?