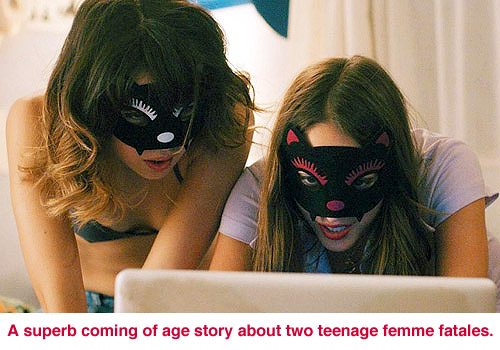 Starts off with a bang. Ends with a Quentin Tarantino-ish denouement. In between savvy story telling.

Director John Charchietta’s tale about two budding teenage femme fatales with moxy beyond their years, could easily have been named “Teenage Molotov Cocktail.” It is an imaginatively made coming of age feature that could become at the very least, a cult following, unless, of course, it gets the kind of special attention it deserves.

They are coming of age in Small Town USA, the setting most likely in the New York City Tri-State area. They want the cash to escape from what they anticipate as the stifling ennui awaiting them after they graduate from their high school. The Big Apple lures and looms as an oases of promising adventure and opportunities.

They are not nearly as worldly sophisticated as they imagine but it is that self-deceit fueled by their bravado that inspires them and powers this movie.

Besides the dreaded ennui they since on the horizon, the two want to flee overburdening parents (who really aren’t that bad), stifling friends and the usual banalities of life in a small town. To flee to New York, however, and live in the style they imagine, even that dream typical of callow and youthful yearnings, they need, of course, money, lots of money.

More bucks can be made, they eventually decide, if they blackmail an anonymous cyber voyeur, Frank played smartly by Pat Healy, at least 20 years older than they are, who is burdened with his own ennui. He loves his wife but not enough to stop dreaming of a clandestine ménage à trois with the two hot vixens in the webcasts he’s been following. Frank cleans the private swimming pools of the affluent and in the course of the film passes himself off to Annie and Jules that he is more bourgeoisie than working class.

The feeling of an inexorable fate becomes more and more noticeable as the two callow vixens grow to know each other. They meet inadvertently when Annie, a new student, stumbles upon Jules in a school dance room where she is blissfully going through paces and Annie is transfixed. Jules shows Annie a few moves and the sexual chemistry becomes obvious as soon as Jules touches her.

Jules not too much later will ask Annie when she knew she was attracted to girls. But they are also attracted to boys.

I like Director Charchietta’s finesse handling teenage sex, vice and existentialism that too often stupidly feed perverse sensationalism if not come off clumsily and goofy in less capable cinematic hands. He demonstrates clear insight about the undertow of adolescent lust and sexual experimentation, and adroitly shows that his stars kissing and caressing each other in a few scenes that their affection may or may not mean that they are gay. And that doesn’t mean they are or aren’t making love off camera. The audience can fill in the gaps to suit themselves.

As the movie flows, scene after scene he shows his understanding of the dynamics and eccentricities of small town school and domestic home life with a plot that constantly reveals issues and consequences lurking beneath the surface.

The movie starts off with a bang – a violent traffic crash and it ends with a Quentin-Tarantino-ish denouement.