Director Rod Blackhurst’s HERE ALONE, just two days ago selected as the 2016 TFF Audience Award Winner for Narrative, is an exquisitely crafted piece of suspense and horror that will reach into the hearts and souls of audience members. Gripping storytelling that doesn’t rely on gratuitous gore and violence – not easy for a “horror” story in these times.

This reviewer was lured to a TFF March screening and attended with expectations he was about to see another film of the Zombie Apocalypse Genre. Lured? Well, I was in the mood for a TFF horror movie and there was the publicity pitch catching my attention: A virus has ravaged human civilization, leaving two groups of survivors: those who have managed to avoid infection, and those driven to madness, violence, and an insatiable bloodlust. The survivors and insatiable bloodlusters  were co-habiting terrain “in the deep woods?” Sounded familiarly zombic to me.

For the sake of being factually correct, the bloodlust-ers were actually insatiable flesh eaters whose rabid and ravenous ripping and tearing of flesh caused a lot of bloodletting. But, I repeat, not one iota of unnecessary gore. Truth be told, “zombie”` was never used in the publicity but, as a Walking Dead and George A. Romero aficionado – some of Romero’s key characters and heroes years and years ago were black males – my mind filled in the blanks.

Lured. And then, of course, there was the face that could scare the bejesus out of Leatherface of the Texas Chain Saw Massacre Franchise episodes or Freddy of the Nightmares on Elm Street franchise: On HERE ALONE iconic banners and posters, the portrait of an enigmatic face indelibly smeared with what I believed at first was face being consumed by fleshing eating goo and muck. 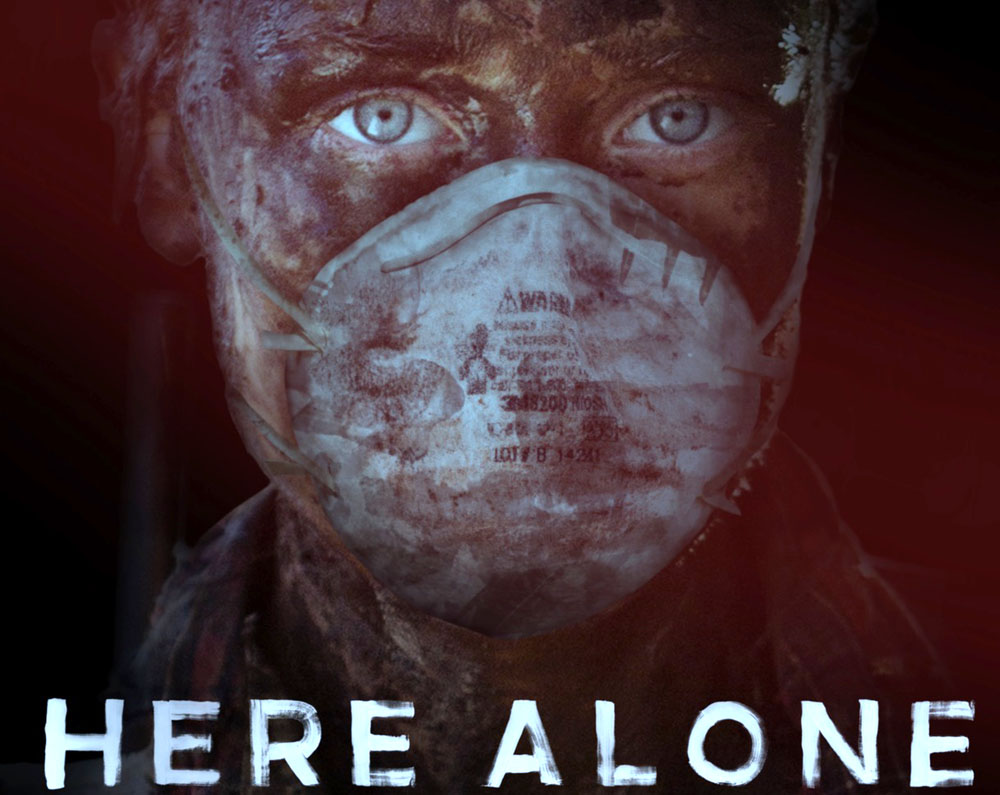 But the goo smeared on that face wasn’t indelible and instead was used by Ann, played smartly by Lucy Waters, as camouflage for her to go about her survivalist rituals which included searching for food in remote houses possibly staked out by flesh-eaters. Early moments into the movie, her visage suddenly flashed on screen – that was a surprise – and at first I thought that the tortured face had been horribly disfigured. Subsequently, and surprisingly, moments later we see her in a lake where she bathes and cleans herself. A surprise, that’s for sure. And there are lots of other surprises in this move which weaves in flashback-like scenes for its haunting narrative.

After a terrible virus ravages human civilization, Ann finds herself living alone in a forest, foraging for supplies, and accompanied only by a radio that broadcasts a single transmission in French. Few animal remain; the only survivors seem to be the roving hordes of infected creatures with a taste for human flesh. One fateful day, Ann crosses paths with two more survivors, Chris, played by  Adam David Thompson, and Olivia, played by Gina Piersanti, and she saves them.  She has survived on her own for so long, and has experienced and witnesses horror and terror but bregrudgingly relates to them as fellow humans. Chris wants her to join them and move on. As Ann tells Chris, “Those who stay, die.”

The last 37 minutes was riveting. It was then that I suddenly became aware that the suspense had been building and building.

I don’t want to say any more because I don’t want to be a spoiler for the legions and legions I hope see this movie. But I want to write this about two horrific scenes: A mom discovering the pus of an ugly developing canker, the telltale sign of the virus that has been laying waste to millions, on the body of her child only a few months old.  And a noninflected survivor opening up about how he had to shove a butcher knife into the ear of someone he once loved. Cringe, I did; cringe, you will too.

Every element in this movie is superb: Directing, acting, cinematography, the minimalist music score and the editing, just to name those.