A publicity blurb reflecting the raves described the Oscar contending 17-minute short as a “nail biting live action short film that has garnered numerous high profile accolades at festivals across the globe.” Director Sonia K. Hadad’s gem tells the story of an Iranian teenager ordered to deliver cocaine to a customer. And the order comes from her drug boss of a dad as she is wrapping up last minute cramming before leaving home for an important school exam.

Whoa! Cocaine dealing dad? Recruiting daughter to be a blow-mule? Putting her at risk in a country known for harsh penalties of drug dealers and their mules? So, where’s mom? Does she know what her husband is up to? No siblings? Do these early scenes hint at pernicious Iranian male patriarchy?  That Iranian high school preppies cheat just as much as American high schoolers?

In Iran? Sounds like a tale from the South Bronx or East New York, Brooklyn.

What the reviewers saw transfixed them as it transfixed this reviewer. But they were so transfixed, this reviewer believes, that they stumbled, fumbled with their descriptions and opinions about the guts of the story. Why? Because this marvelous, minimalist short with its scenes of bourgeoisie living in modern day Iran is beautifully inscrutable. It caused this reviewer to wonder if he was seeing a guileful creation springing from the recesses of Director Hadad’s imagination. A kind of chimera? So well made, that it’s easy to understand how a reviewer could overlook or mistake what could be subtleties, nuances and litotes about everyday Iranian upper middle class life.

Let’s face it. Many, many Americans impressions of that Persian country are mostly shaped by the stories and commentaries of corporate news media; and the streets of its cities, especially Tehran, are usually visually rife with strife. But not in EXAM.

EXAM opens with a teen played by Sadaf Asgari sitting at a dining room table in what looks like an upscale apartment. She’s talking to herself as she is doing last minute cramming that includes  a backup plan of concealed crib notes on her arms. As she is about to leave for school, her dad casually tells her that she has to deliver the blow, which is in a small packet that fits into her hand.

She can’t convince dad that she could be late if she has to mule it for him, and she leaves home perturbed. But this teenager is crafty and resourceful, and there is this hint that she has developed strategies for dealing with this dad when he wants her to do something she doesn’t want to do. No spoiler from this reviewer about what she tries to do to thwart her mule-ing mission. She’s unsuccessful, though, here’s a hint: She’s on the street just outside the family apartment on her cell.

The daughter heads off to rendezvous with dad’s customer and he doesn’t show up. She heads to school with the blow in her possession and once there  … uh oh … Random Bag Check! Looks like a Gestapo tactic as Sadaf’s character and her classmates are required to submit to a search. It has to be noted here that Masih Kazemi as the contraband facilitator of the Random Bag Check could scare the bejesus out of any teeny-bopping smuggler. Cell phones, perfume, and a hair-styling wand are confiscated. What about the blow? 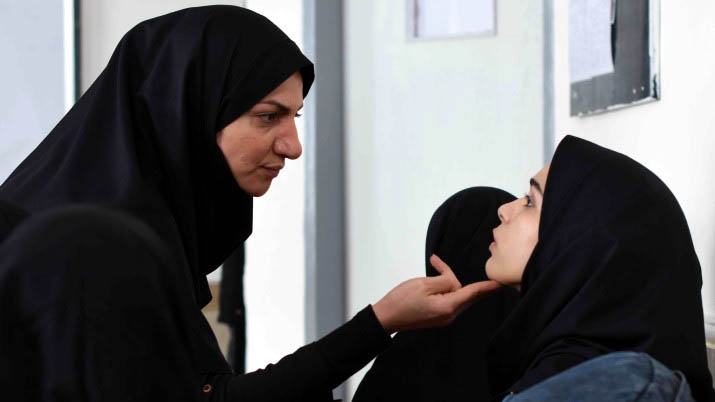 Masih Kazemi as the contraband facilitator.

The tension mounts at the start of the bag check but I stop here with details to avoid spoilers. I didn’t think it was as much “nail biting,” as one reviewer put it. But suspenseful? Yes. Taunt, yes, but I wasn’t nibbling on my nails. I do believe that every time I were to watch this short, I would discover marvelous touches by Director Sonia K. Hada and writer Farnoosh Samadi. This leads me to wonder if, perhaps, Director Hadad’s EXAM is the seed for a full film project. Filmmakers are known to do that.

In Persian with English subtitles.

Sonia K. Hadad is an Iranian writer and director who has a film and media arts MFA at Emerson College in Boston. Born in 1989, in Tehran and primarily educated there. She has diplomas in physics and mathematics and graphic design. In 2005 Sonia started her professional theatre acting career and has played in theaters, public performances, telefilms, and TV shows. In 2009 she completed her BA in dramatic literature from Azad University of Art and Architecture. EXAM is her third short, following PERSONAL and THE BOX.

Producer Pouria Heidary Oureh is the founder and director of Three Gardens Productions. He graduated from SAE institute of Digital Film in Dubai. He has worked with several renowned Iranian directors in Iran as well as abroad before directing his own films. He was the producer of successful shorts and features like AZAR (documentary short) 2019, GAZE (Fiction short) 2017; DELAY (Fiction Short) 2018, THE ROLE (Fiction short) 2018; MAGICAL(Short fiction) 2018, several others.