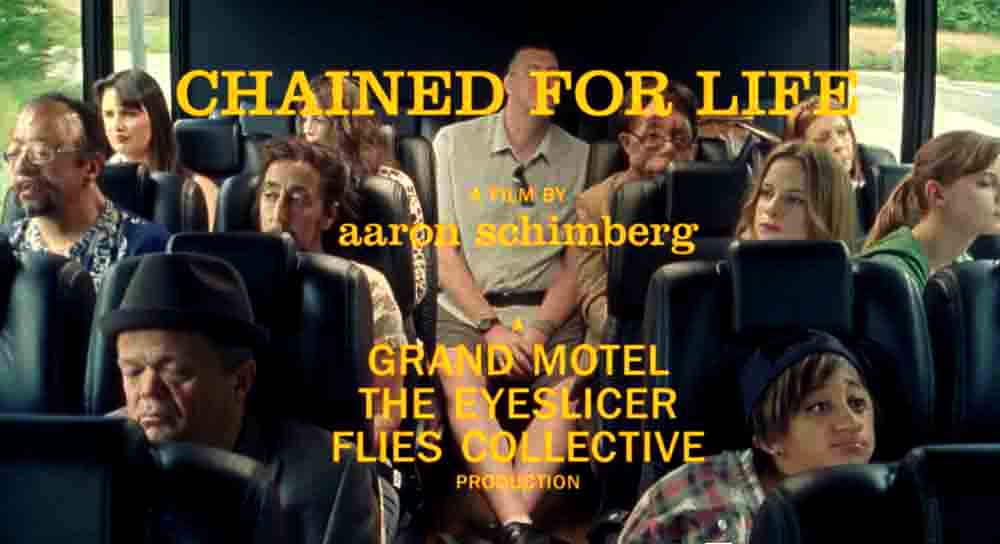 A brilliant, acerbic depiction of “gonzo surrealism” about an “outré art-horror” movie being shot in a semi-abandoned hospital – that was the publicity hook for this reviewer who was subsequently swept up in the reverie of a Brooklyn filmmaking auteur’s stylistic Super 16mm movie flushed with scenes surreal or with the verisimilitude of a reality TV show.

But it took several takes before the 5Ws&H gestalt of  this bravura was able to form in the mind of this reviewer who is also a journalist. Journalists, an important reminder in these days of Fake News, pursue the truth and that sometimes mean discerning the meaning of really great films in the pursuit of the elusive truth, especially about the meaning of life or why one can’t discern the meaning of life or why, this time, Aaron Schimberg’s CHAINED FOR LIFE was blowing my mind.

One reviewer wrote about it being a romance between co-starring film characters, one suffering from an affliction that causes grotesque tumors to grow around nerves, twisting and deforming his face, and the other so-star a winsome beauty who agonizes because she finds her co-star physically repugnant but wants to relate to him because he’s a decent human being who is repulsive because of no fault of his own – and, of course, she wants to be truly professional about her work. Those roles are repeated in a very similar fashion for the movie they were hired to act in.

There was more going on that just a romance. Waves of loquacious bantering, from scuttlebutt and gossip about beauty, disfigurement, and cosmetic surgery to industry argot as well as layers and layers of plot elements and sub-elements enriching imaginative cinematography added to the kaleidoscopic whirl experienced by this reviewer who needed, again, several takes to get a handle on the mission of this art house gem about an art house movie. At times it appeared that Schimberg’s art house gem was embossed with elements of those 30s and 40s Frankenstein horror movies (some that were sad, some that were just plain horrific, but there was a beauty and beast element in them all).

This reviewer came to appreciate what the Brooklyn auteur was doing by recognizing, eventually, the thematic, stylistic and realistic movie-theater props, those seen and heard as well as viscerally felt, including cast members knuckled punched with gross deformities or blessed with physical attractiveness (or at least there wasn’t anything about them that was visually gruesome) by the vagaries of fate. In other words, I was spellbound what I heard and saw and definitely felt on a visceral level even though at the same time CHAINED FOR LIFE was bewildering for this writer whose job was to tell viewers what the film is about.

So says Director-Writer Aaron Schimbeg: “The thing that makes film different from other art forms: You write a novel, people read it, they don’t like it, you put it in a drawer, you rewrite it, you do another novel. If you’re a painter, you slash the canvas. But when you go into making a film, you don’t know how it’s going to turn out, but it has to get out there either way. There’s money on the line, there’s time, there’s a lot of people’s efforts. In most cases it’s already public knowledge before it’s done.” – Excerpt from a Bomb Magazine interview of Aron Schimberg by Steve Macfarlane, November 21, 2013

CHAINED FOR LIFE (2018) opens with the scrolling comments of deceased New Yorker film reviewer Pauline Kael, who, if she had possibly lived longer, never would have met a Kardashian whom she would dislike, oohing and aahing, lavishly fawning about actors/actresses who are “more beautiful than ordinary people” and that “we” should not be deprived of the pleasure of their beauty.

That scene segues to the winsome actress Mabel, played smartly by Jess Wexler, who in this scene of the film within the movie is Frieda, her back to the camera as it follows her gliding in slow motion pass doctors and nurses until she stumbles into a surgery room where she disrupts the medical slicing and dicing at hand by accidentally knocking over a glass fixture, revealing to us that she’s blind.

The doctor, nipping and tucking tissue on the deformed face of a patient, shushes a nurse gasping at the intrusion by Mabel, and eventually tells the nurse to leave the room. She does, her gait grotesquely afflicted as if every joint in her arms and legs is at war with each other. (As soon as I saw her ignominious gait I had visions of an Igor from a Gothic Frankenstein movie.)

Despite the patient on a medical gurney, which is probably more autopsy slab than a gurney, the surgeon rushes to Frieda (Mabel), the moment looking like a slapstick scene in a vaudeville show. Suddenly, a gunshot is heard. Followed by “Cut!” The gunshot was as much an intruder in the “real world” filming being done as Frieda’s stumbling, fumbling breaking of the glass.

There are more terrific gonzo scenes more seductive as this one and they kept me coming back and back until this CHAINED FOR LIFE (2018) made wonderful sense to me but on an instinctive emotional level I can’t begin to describe narratively here.

CHAINED FOR LIFE (1952)
According to a review of a number of articles, this 1952 film  – cinematically siamese? – tells the story of two conjoined female Siamese twins, youngish, touring the country with a geek show of people born with the kind of abnormalities that once attracted crowds of happily paying voyeuristic souls (who would easily brutalize such people outside the protective walls of their geek realm). One twin marries a hustler who rips off the sizable funds that she and her sister made from their routine. The other sister kills the son-of-a-bitch philanderer and both girls, of course, go on trial. And so on. The movie, shortly after its release, was screened at a “Worst of the Worst Film Festival” along with PLAN 9 FROM OUTER SPACE and TEENAGE CAVE MAN. The film came to be known as a exploitation film because of the sensationalism of the conjoined twins and other circus geeks.

FREAKS (1932)
Directed by Tod Browning – I saw this one once or twice a long, long time ago but am relying on IMDb: A circus’ beautiful trapeze artist agrees to marry the leader of side-show performers, but his deformed friends discover she is only marrying him for his inheritance.